In the 1940s, the CIO launched a wide-ranging attempt to unionize workers in the South. This movement was known as Operation Dixie, and some of its key battles were fought in Forsyth County.

In 1946 the local United Tobacco Workers (CIO) union was involved in contract negotiations with R. J. Reynolds Tobacco Company. Philip Koritz, head of the UTW Local 22, had won key concessions from RJR, including a 60-cent minimum hiring wage for workers, three paid holidays per year, and a graded system for wage increases (which had previously been determined by the whims of the foremen). However, most of these benefits did not extend to seasonal workers at the “leaf houses”, where the tobacco leaves were prepared for processing.

Philip Koritz and Local 22 had met with resistance in their demand for a raise to a 65 cent minimum wage for stemmers and other workers at the Piedmont Leaf plant in Winston-Salem. When contracts expired on July 22, 1946, the Piedmont Leaf management was still only willing to offer a 2-cent per hour raise. So about 35 union workers began walking a picket line on Fourth Street in downtown Winston-Salem.

As the strike dragged on, the union tried to provide for the striking workers. The local African-American community was largely supportive, although a few business owners complained that Local 22 had threatened them with a boycott if they did not lend financial support to the strike relief fund. Some workers in other Reynolds plants were sympathetic to the Piedmont Leaf strikers and joined in the picket line during their lunch hours. The demonstrations were mostly peaceful, but tensions grew as the summer progressed and the strike entered its second month without any resolution in sight. 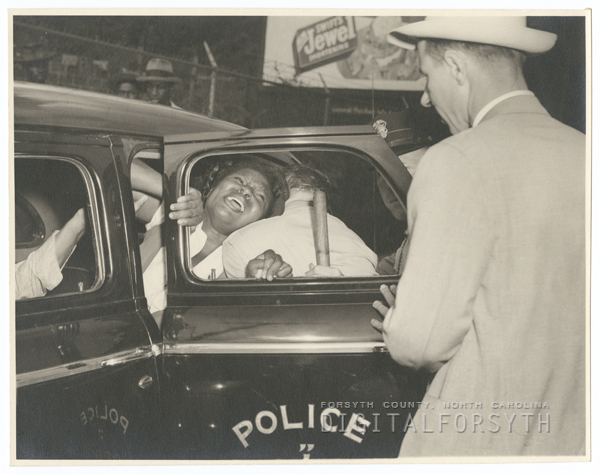 Late in the afternoon of August 23, Winston-Salem Police Chief John Gold and about fifteen officers arrived at the main entrance to Piedmont Leaf to escort construction equipment onto the grounds (even though there was another, unpicketed entrance available for this purpose). With them was photographer Frank Jones from the Winston-Salem Journal and Sentinel. A truck from L.A. Reynolds Landscaping arrived at 4:30 p.m., and the captain of the picket line asked the driver to wait until the strikers dispersed at 5:00. The driver appeared willing to do this, but police ordered the crowd to move.

When two women remained in front of the gates, police began making arrests, and the situation deteriorated rapidly.

The first arrest, a young woman named Margaret DeGraffenreid, became very upset and was pushed into a police car.

The crowd grew as hundreds of workers in other Reynolds plants finished their shifts and came to investigate the disturbance.

One Reynolds worker, Cal Roberson Jones, was arrested as he approached the picketers. Union leader Philip Koritz , who had just arrived on the scene, argued with police that Jones was not a striker and should not be arrested. Koritz too was apprehended and forced into a police car.

Koritz and the others were charged with resisting arrest and refusing to obey a police officer. They were released on their own recognizance after a phone call to Governor Gregg Cherry, and Koritz returned to the picket line and urged the crowd to disperse peacefully.

Picketing at Piedmont Leaf continued into September. Koritz, Jones, and DeGraffenreid made their first court appearance on September 4, to face charges of resisting arrest. After being found guilty by Judge Leroy Sams, the three defendants appealed their sentences in Forsyth County Superior Court. The defense argued that the police had provoked the picketers and had used excessive force. Photographer Frank Jones was called as a witness, and his photographs of the event were entered as evidence.

Prosecutors countered with accusations that picketers had defied police orders and had become violent when officers attempted to subdue them. Several police officers testified against the defendants. Koritz was portrayed as an outside agitator and a suspected communist. In the end, the jury of seven white and five black members found the defendants guilty. Judge Julius Rousseau sentenced Koritz and Jones to twelve and ten months respectively on a road crew, and DeGraffenreid received eight months at the county work farm.

Meanwhile, Local 22 and Piedmont Leaf had finally entered into productive negotiation, and by September 18 an agreement had been reached. The union compromised on some of its demands but achieved, among other things, a 60-cent minimum wage and three paid holidays for seasonal workers.

In the long run, however, the CIO’s attempts to unionize Southern workers were not as successful as the union had hoped. Many of the issues which surrounded the Piedmont Leaf strike — racial tensions, mechanization of industrial processes, and fears of communist infiltration — contributed to the downfall of the CIO in the South. Infighting among union factions hastened the demise, and in a pivotal election in 1950, Local 22 was voted out of existence in Winston-Salem.

Read more about the history of labor unions 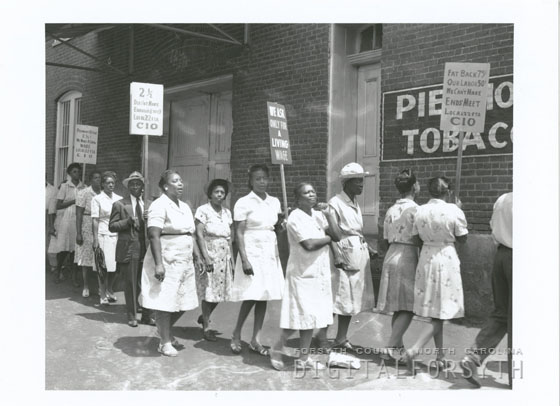