The Battle of Moores Creek Bridge

In 1775, disputes between Josiah Martin, North Carolina Royal Governor, and the colonists became unbearable. As a means of discouraging the use of force by Martin, the Patriot militia companies were called out in New Bern and the surrounding countryside, with the avowed purpose of opposition to royal authority. With the mounting wave of resistance forecasting violence and upheaval, the governor began to fear for his life. Gov. Martin fled Tryon Palace (his home) in New Bern, to a British ship off the coast of Wilmington. Safe on the ship, Martin developed a plan to re-take North Carolina. His plan called for Britain to send troops while he recruited Loyalists in the area. The Loyalists were to rendezvous with the British troops in Brunswick, near Wilmington. Gov. Martin would supply weapons to the Loyalists and lead them in subduing North Carolina and returning it to British rule.

Gov. Martin believed 10,000 Loyalists could be recruited in the colony. The governor had friends in Cross Creek (Fayetteville), so he sent Alexander McLean to recruit his supporters there. Along with McLean, two British army officers, Gen. Donald MacDonald and Capt. Donald McLeod (Scottish Highlanders) were sent to Cross Creek because of their ability to speak Gaelic. Cross Creek had been settled by Scottish Highlanders, and their native language was Gaelic. At Cross Creek they recruited only 1600 Loyalists to fight, the majority of whom were Scots. These Scots were to receive 200 acres of land, would not have to pay taxes for 20 years, and be reimbursed for the supplies they used. The Loyalists then set out for the coast near Wilmington.

The Patriots learned of Martin’s plan. Three officers were deployed: Colonel James Moore, Colonel Richard Caswell and Colonel Alexander Lillington. Colonel Moore, the commander, blocked the most direct route to the sea at Rockfish Creek near Cross Creek. When Moore had established his troops there, Gen. MacDonald and the Loyalists were forced to use Negro Head Point Road, a route that crossed Moores Creek. Col. Lillington and his 150 minutemen were sent to block Moores Creek Bridge. Lillington’s men built earthworks on the east bank of the creek, in sight of the bridge. Caswell and his 850 militiamen were the next to arrive at the creek. They brought two pieces of artillery. Old Mother Covington was a 2½ pound cannon and her "daughter" was a ½ pound swivel gun. Col. Caswell and some of his men set up camp on the west bank of the creek.

Meanwhile, the Loyalists had traveled within six miles of the bridge. The Loyalists sent a messenger to the Patriot camp under a flag of truce. The messenger informed the Patriots that they would be pardoned if they would surrender and declare their loyalty to the king. The Patriots refused and sent the messenger back. However, the messenger had secured important information. He reported to MacDonald that the Patriots were camped with the creek to their backs. Gen. MacDonald who wanted to move his troops to the coast without engaging in battle, fell ill, and Capt. McLeod assumed command of the Loyalists.

Later that evening, Caswell moved his men to the east bank of the creek joining Col. Lillington’s Patriots. After everyone was across, Caswell’s men removed some of the planks from the bridge. They left the tents up and the campfires burning on the west bank to make the Loyalists believe they had just left the camp.

On February 27, 1776, at 1 am, the Loyalists started their march to Moores Creek. They arrived at daybreak to find Caswell’s camp empty. McLean saw some men on the other side of the bridge. The men asked McLean if he was a friend. McLean replied, “to the King.” The men fell back to the earthworks. McLean then called out to the men in Gaelic. There was no reply. He realized the men were Patriots and reported this to Capt. McLeod.

Capt. McLeod rallied his troops and moved to the bridge, where he discovered that the planks had been removed. To the cry of, “King George and Broadswords,” the Loyalists crossed the girders. As they charged along the causeway, they met the cannon and musket fire of the Patriots. Loyalists fell along the road and on the bridge, some drowning in Moores Creek.

Within minutes the battle was over. Over 30 Loyalists were killed, including Capt. McLeod. One Patriot, John Grady, died from wounds sustained in the battle and one other was injured. The remaining Loyalists fled for safety. Some of them were captured and imprisoned, including Gen. Donald MacDonald. The Patriots, who numbered about 1000, had defeated 1600 Loyalists.

After the battle, captured Loyalists who were not officers were released after taking an oath not to raise arms against the Patriot cause in the future. The officers, however, were incarcerated in Halifax, North Carolina, which was soon bulging with Loyalist prisoners of war.

The Patriot victory at Moores Creek convinced North Carolina to instruct its delegates to the Second Continental Congress to vote for independence from Great Britain. This made North Carolina the first of the colonial governments to call for total independence.

In May 1776, The British fleet, after battling high winds and heavy seas for more than two months, finally dropped anchor in the Cape Fear River. After hearing of the Patriot victory at Moores Creek Bridge, the British fleet sailed for Fort Sullivan, near Charleston, South Carolina. On June 28, the British ships opened fire upon the half-completed fort and its 413 patriot defenders. From 11:00 a.m. to about 9:30 p.m., the British ships continuously fired, and the patriots returned fire with their twenty-five guns.

The fort’s palmetto logs did not splinter when hit and the sand absorbed the shots. The British fleet abandoned the fight and sailed to the North where the war would be fought for the next four years. The British would not invade the South again until 1780.

Part of a Teacher's Guide to Moores Creek National Battlefield. 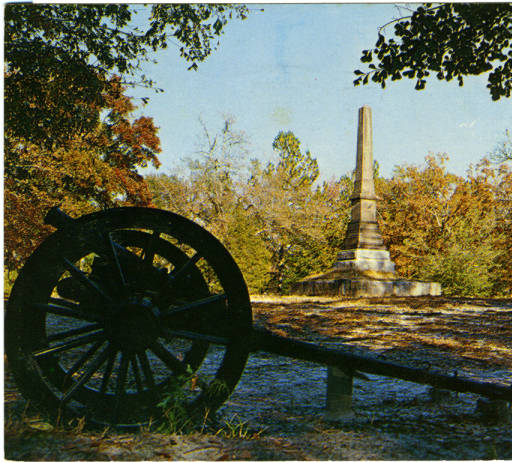