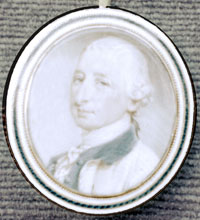 Josiah Martin (1737-1786), the last royal governor of North Carolina, aroused sentiment for independence in North Carolina through his inflexible loyalty to the crown. He was born in April 1737 in Dublin, Ireland, to Colonel Samuel and Sarah Wyke Irish Martin of Greencastle, Antigua. He spent most of his first fifteen years in Ireland and England, travelling with his tutor to the West Indies in 1752. He did not care for the tropical climate in Antigua, however, claiming that it affected his health. In 1756 Martin reported to London to study law. There his older half brother Samuel, a member of Parliament, used his influence to help Josiah gain favorable positions. Forsaking the study of law young Martin for a time pursued a military career. Josiah Martin married his first cousin Elizabeth Martin in New York in January 1761. They had eight children, four of whom survived to maturity, but none of whom married.

His brother Samuel’s efforts on his behalf finally paid off when Lord Hillsborough, the secretary of the colonies, was shuffling leadership posts. North Carolina’s governor, William Tryon, transferred to New York to assume its governorship. Josiah Martin, at age thirty-four, was named to succeed Tryon in December 1770. He did not receive the notification, however, until March 1771. By that time he was undergoing medical treatment in New York. It would be several months before he could move south.

Martin inherited several problems from Tryon, among them the fallout from the War of the Regulation, an ongoing boundary dispute with South Carolina, and a controversy over the colonists’s rights over non-resident debtors. His term initially showed promise, as he was able to calm discordant feelings resulting from the War of the Regulation. The governor and the assembly worked together to produce legislation in 1771 to resolve the war debt. Yet, Martin’s loyalty to the crown was without question. The assembly in 1773 tacked onto the court law bill a foreign attachment clause, permitting colonists to recover debts owed by non-residents who owned property in North Carolina. Martin vetoed the bill because the attachment clause was unfavorable to the crown. The veto left the colony without a court system. For this the colonists blamed royal authority.

North Carolinians, holding Martin in contempt, convened the First Provincial Congress in New Bern in 1774. This convention recommended that counties form committees of safety, a move to supplant royal authority. Within the year, Martin sent his family to New York, fearing for their safety. He fled from New Bern to Fort Johnston, in present-day Southport. There he stayed until, hearing of a plot to take the fort, he moved headquarters offshore to the war sloop Cruizer.

Martin stayed with his family in New York from 1776 to 1779, during which time his wife died and all of his property in North Carolina was sold by order of the assembly. Late in the war, still hopeful that he could regain his post, he joined Lord Charles Cornwallis to try to rally loyalist troops in North Carolina. Citing health reasons, Martin left for England in 1781 with all but one of his children. Martin died on April 13, 1786, and was buried at St. George’s Parish Church in London.

Taylor, H. Braughn. 1975. The foreign attachment law and the coming of the Revolution in North Carolina. North Carolina historical review. 52 (1).