The Reed Gold Mine

The story of North Carolina's Reed Gold Mine reveals the amazing accidents, drama, and ironies of history that, with variations, occurred in connection with gold rushes around the world. It is the story of an illiterate Hessian mercenary from Germany -- an illegal immigrant -- who deserted from the British army in Savannah and made his way to backwoods North Carolina, where he settled near Meadow Creek in Mecklenburg County, married, and raised a family. It is the saga of a twelve-year-old boy who went fishing one Sunday and found a seventeen-pound rock that served as a convenient doorstop for three years before being sold to a merchant for a mere $3.50, although it was gold worth a thousand times that modest sum. It is the account of an impoverished slave who found a twenty-eight-pound nugget of gold in a creek while doing part-time mining for his owner. It is the report of a rich mine that was closed for a decade while its owners argued over a hunk of gold in legal battles that reached the state supreme court. It is the topsy-turvy tale of a mine whose last original family owner went broke and sold the property at auction, only to see it resold ten months later for an 800 percent jump in price. It is the narrative of a mining company that, despite tens of thousands of dollars and the latest technology, equipment, and management, failed within a year. It is the legend of a woman murdered by a family member and shoved down a mine shaft. It is the tale of a mine only twenty miles from Charlotte abandoned and kept for a private hunting retreat for seventy years, only to wind up preserved as a state historic site.

The Reed Gold Mine in Cabarrus County, site in 1799 of the first authenticated discovery of gold in the United States, held out the initial golden promise to the people of the Piedmont and the nation. In beginning such a story it is imperative, of course, to introduce John Reed, the fortunate fellow who owned the mine. Unhappily, because there are no known Reed manuscripts, many questions about his life and his mine remain unanswered. The very spelling of the apparently illiterate man's name may be questioned. Since he was born in Germany, John Reed must have Anglicized his original name, which probably was Johannes Ried, Riedt, or Rieth. Many German surnames in Piedmont North Carolina received American equivalents either by transferring the sound or meaning of the word to English. As "Reed" meets both of these criteria when compared with Ried, and several of his sons signed their names in that manner, the spelling seems to have been a logical choice. Equally imprecise until recently have been the date and place of John Reed's birth. He was born in 1757, 1758, or 1759 in the province of Hessen-Cassel. These uncertainties about the place and time of Reed's birth and his German heritage remained an enigma until the 1990s, when Mark A. Schwalm, a Hessian descendant and genealogist, completed the most thorough analysis of the questions.

In 1799 the course of Reed's life and a portion of the history of his adopted homeland was turned about by the accidental discovery of gold on his property. The most authentic accounts of the find come from some of Reed's relatives about half a century after the occasion. One Sunday -- supposedly in the spring -- twelve-year-old Conrad Reed, son of John, chose to go fishing with several siblings in Little Meadow Creek on the family farm rather that attend church with his parents. While busy alongside the creek he saw "a yellow substance shining in the water." Wading in to retrieve the object, he discovered it to be some kind of metal. The wedge-shaped rock was about the size of a small smoothing iron, or flatiron. Its weight was later said to be approximately seventeen pounds.

Conrad subsequently showed the yellow rock to his father, but John Reed, unable to identify it, set the heavy stone aside as a useful doorstop and continued life as usual. For some time this valuable doorstop served unnoticed in its utilitarian role. On only a single recorded occasion during the next three years did Reed pay any particular attention to it. At some point he took the hunk of ore to William Atkinson, supposedly a silversmith in Concord, for identification. The latter proved to be a silversmith unable to recognize raw gold and could not identify the rock.

Nevertheless, Reed in 1802 found a person who knew the metal at once. A jeweler in Fayetteville, whom Reed visited on an annual marketing trip to that town, told Reed that the metal was gold and asked that the nugget be left for fluxing; when Reed returned, the artisan showed him a bar of gold six to eight inches long. It may be difficult to believe that Reed had no conception of gold as a precious item, but when the craftsman offered to buy the nugget, Reed asked what he felt to be a "big price" -- $3.50. The merchant, whose name is now unknown, gladly paid him and received roughly $3,600 worth of gold. 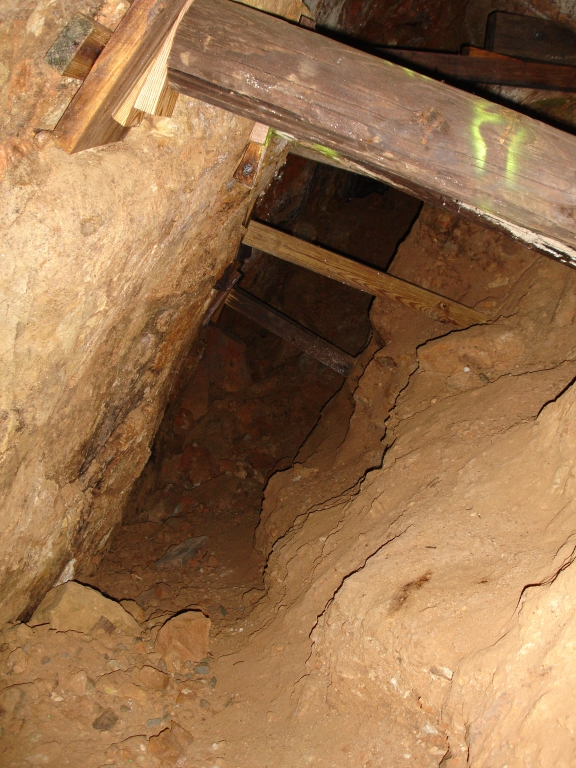 The original mine shafts were barely wide enough for a man to squeeze through.

It was not long before Reed (perhaps with the aid of James Love or others) discovered his errors and supposedly recovered about a thousand dollars from the jeweler. Reed and his family soon began searching in Little Meadow Creek for other valuable rocks. The chief hunts occurred in the summer, when farming did not require much labor and the creek was dry. Perhaps uneasy with his sudden wealth, Reed early turned a profit and in 1803 expanded his operation by taking three friends of relative substance -- his brother-in-law Frederick Kiser, Reverend Love, and wealthy landowner Martin Phifer Jr. -- into partnership. After the crops were put into the ground and the stream on Reed's land had nearly dried up in late summer, each of the three other men supplied equipment and two slaves to dig for gold in the creek bed. The four associates planned an equal division of returns. They were not disappointed, as Peter, one of the slaves owned by Love, unearthed from merely six inches below the bottom of Little Meadow Creek (near a deep spot called the "lake") a twenty-eight-pound nugget worth more than sixty-six hundred dollars before the end of the season. One story was that Love offered Peter a walnut-sized knob off the nugget before it was fluxed, but Peter -- fearful of a jest at his expense -- refused to risk damage to his dinner fork by trying to pry off the piece.

The gold later enabled intelligent but uneducated Reed to become a man of significant wealth over the years, and he invested in land and slaves but otherwise apparently lived modestly. In the sixty or so years he resided in the area, he engaged in about two dozen documented land transactions (including some intended to defend or enhance his mining sites) in Cabarrus County alone. Reed bought some two thousand acres of land there and retained nearly half of it until his death. He also became part of the unfortunate southern habit of slaveholding, purchasing three African Americans -- Dinah, Charity, and Sam -- in 1804. Reed ultimately may have owned more than a dozen additional blacks. Thirteen unmarked stones, which may mark slave graves, have survived in the family cemetery. Each of Reed's three partners owned more than a dozen enslaved Americans in his lifetime, and each of the four men attained or approached the level of affluence of the one in fifty Piedmont slaveowners who owned twenty or more slaves in 1860. At that time only about a fourth of white families in the state owned any slaves at all.

illiterate Hessian mercenary from Germany -- an illegal immigrant -- who deserted from the British army in Savannah and made his way to backwoods North Carolina, where he settled near Meadow Creek in Mecklenburg County, married, and raised a family." data-share-imageurl=""> 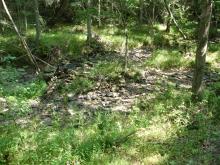 In 1799, Conrad Reed found the first nugget of gold in this stream bed, which runs only seasonally.