Many residents of Elizabethan England did not enjoy the abundance that accompanied Queen Elizabeth’s reign. The dawn of the age of exploration gripped people’s imaginations and caused many to dream of travel, and the New World offered the promise of a fresh start without the problems of the old country.

Setting sail from the Old World

Even by jumbo jet it is a long way from England to eastern North Carolina, but the trip is short indeed when compared to that of the Elizabethans who sailed to the same area 400 years ago. One Wednesday last spring I stood in the British Museum in London looking at the Roanoke exhibition, which will be coming to Raleigh next year. Just three days later I was with a party of Tar Heel Junior Historians at Manteo, visiting the sites of Fort Raleigh, the first English settlement in North America, and the Elizabeth II. This small ship, a reconstructed sailing vessel based on Elizabethan shipbuilding designs, vividly illustrated what those first English colonists endured to come to this country. Space was cramped and living conditions were neither private nor comfortable. There were no bunks, hammocks, or cots, and the rat-infested journey lasted at least two months. Women and children had to stay below deck for most of the voyage, because the crowded deck area barely had room for the working sailors — and none at all for playing children or sightseers. Elizabethan sailors often resented having to carry passengers, too, when they could have been out raiding Spanish merchant ships for gold or other treasure. Looking at the Elizabeth II, I wondered what had prompted those 115 brave souls to leave England and risk the dangers of both an ocean voyage and a New World.

While none of the eighty-nine men, seventeen women, and nine children who made the journey left written accounts of why they went, two sorts of forces must have compelled them. First there was the push out of England, and secondly there was the pull attracting them to the New World.

Without doubt conditions in England could be hard. Famine brought periodic starvation to a population that already endured hunger as a common companion. Younger sons of the more prosperous middle class often had to seek employment away from their families or local communities because the eldest son of an English family inherited all the property from his father’s estate. There was no land or wealth left over for younger sons. Some of the “lost colonists” may have come from England’s middle class and perhaps were willing to leave England for this reason.

Landless laborers who worked for aristocratic landowners had an even tougher time, particularly during the winter when they faced long months of hunger. Many resorted to poaching game from a landowner’s estate in order to feed their families. If they were caught the punishment was swift and hard. With no chance of owning land in England, the thought of the rich land in the New World probably seemed very attractive.

Conditions for poor people in towns were even more desperate, for there was no welfare system for the less fortunate as we know it. Beggars, for instance, could be whipped until their backs were bloody. Jobs were few, pay was uniformly low because of public laws that existed then, and the chance for earning a better life was nearly impossible.

The promise of the New World

The dawn of the age of exploration gripped people’s imaginations and caused many adventurous men and women, unhappy with life in England, to dream of travel. Whatever the reasons encouraging people to leave England, the New World offered the promise of a fresh start without the problems of the old country. Many colonists, particularly the soldiers in Ralph Lane’s 1585 settlement, came with the narrow goal of plunder and immediate wealth. But what made the last Roanoke colony of 1587 unique among all the other settlement attempts by European countries at that time was the determination to send families to farm and improve the land. These were people who came to stay in the New World, rather than adventurers seeking quick wealth before returning to England.

Simply, the colonists came to build another, better England. All who came prized the promise of 500 acres of land offered by Sir Walter Raleigh. This represented a huge farm by the standards of the crowded England they left behind. But they never forgot that they were Englishmen. They felt a deep sense of patriotism, a love of their ruler Queen Elizabeth I, a determination to stop the expansion of Spanish influence, and a missionary zeal to convert the Indians who lived in the New World to true Christianity — which being Englishmen they accepted as the teachings of the Church of England.

Those who came brought high expectations, for they had been told that the area was a land of milk and honey. Its streams and waters were full of fish, its forests teeming with game, its Indians friendly, and its climate so mild and soil so fertile that crops grew as easily as weeds. No settler in this goodliest land could ever fail to prosper.

Time proved such promises cruelly false. Hunger afflicted the settlers in the New World, just as in the old. The colonists still fought among themselves despite their best intentions, and they fought with many of the Indians as well. Eventually the 1587 colony disappeared. This was the last English attempt to found a permanent colony in the New World in the sixteenth century. Success would not come to the experiment until the beginning of Jamestown, Virginia, in 1607. But what about those men, women, and children left behind on the edge of a new continent? When all hopes of rescue or reinforcements had faded, did they still think the gamble had been worthwhile? Perhaps the pioneers lost heart and believed they had failed. Yet today, four hundred years later, looking around the state and nation they helped to create by being the first English to try and live here, we realize how important their contributions really were. Their example kept the dream of colonization alive and brought a new generation of English-men and women to America twenty years later who cemented England’s claim to the New World. 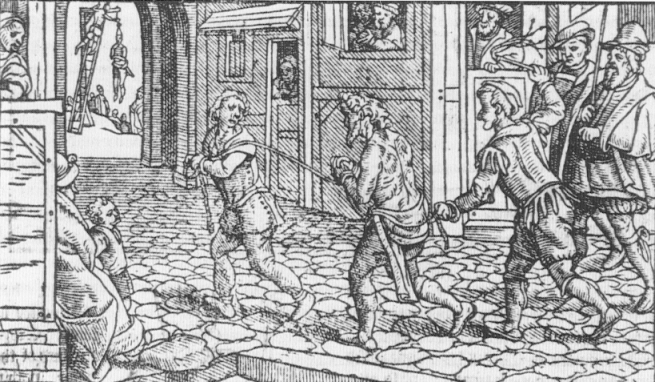 Beggars and the unemployed fared poorly in Elizabethan England. The law ordered them to be "grievously whipped" for begging. A second offense meant hanging. The beggar shown above is on his way to the gallows, pictured at the extreme left. 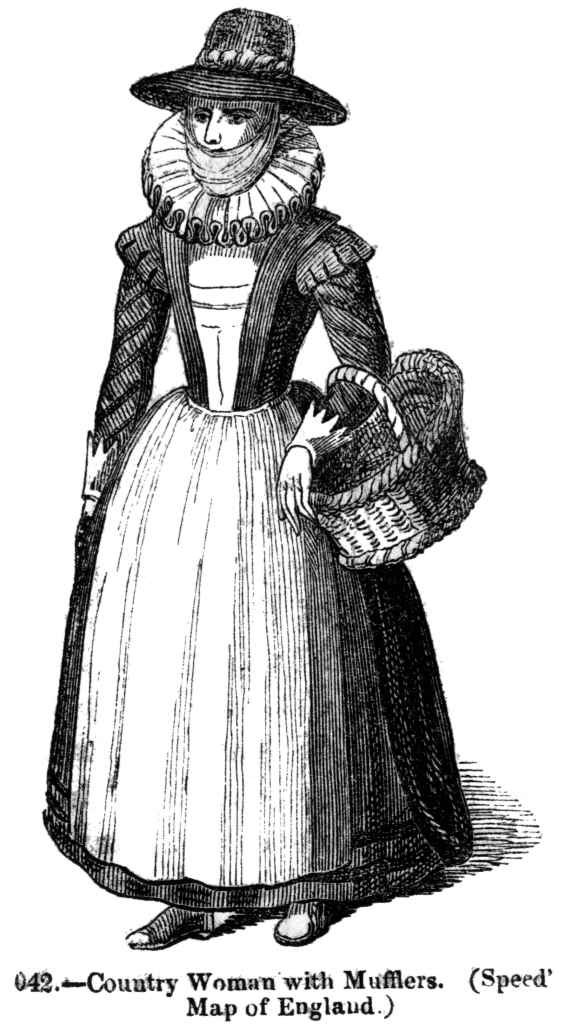 Country women in Elizabethan England worked hard in their homes and on farms. This woman wears a muffler — a kerchief worn over part of the face to protect it from the sun and wind. 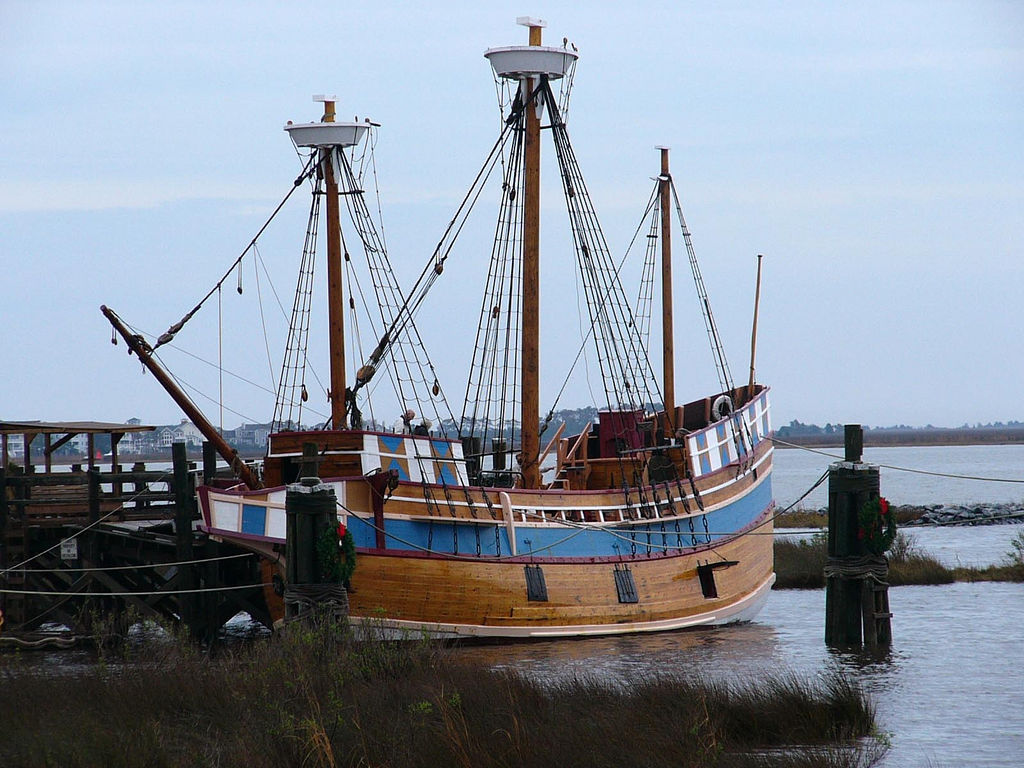 The Elizabeth II, at Roanoke Island Festival Park in Manteo. 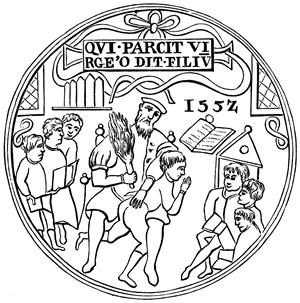 A 1552 school seal from Louth Grammar School in England bears the motto "Spare the rod and spoil the child." Elizabethans regarded children as small, troublesome adults who had to be disciplined firmly and frequently. 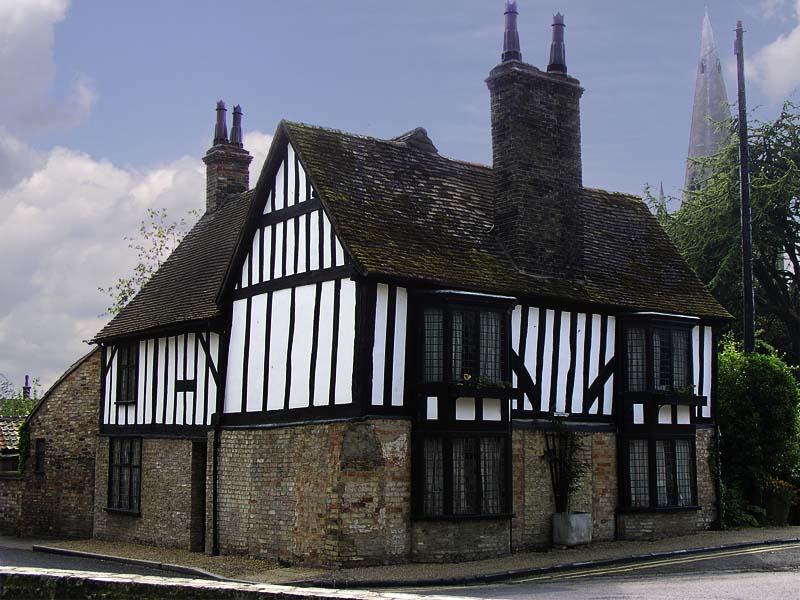 This Elizabethan house illustrates the plaster-and-timber buildings common throughout England at that time.