Hurricane Floyd's eye passed over most of the East Coast of the United States in September 1999.

On Sept. 15, 1999, Mother Nature poised herself to deliver the second in a one-two punch combination of hurricanes to hit North Carolina. Earlier, Hurricane Dennis jabbed once at the Carolina coast before doubling back and coming ashore as Tropical Storm Dennis on Sept. 5, packing torrential rains and 70 mile-per-hour winds. Then came the knockout punch -- Hurricane Floyd -- ten days later.

Near its eye, Floyd's winds raged at 130 miles per hour, earning it a Category 3 rating from meteorologists (Category 5 is the most severe, with winds greater than 155 mph). Yet, this was no ordinary Category 3 storm. Almost twice the size of typical Atlantic hurricanes, Floyd was some 580 miles (933 km) across and packed tropical storm-force winds (40 to 73 mph) or greater across that entire span. As it approached the East Coast, North Carolinians were understandably nervous, recalling the nine-day assault from Dennis that they had recently endured. At about 3 a.m. on Sept. 16, Floyd made landfall near Cape Fear, NC, dumping from 15 to 20 inches of rain in some parts of the state over a 12-hour period. This was in apition to the 6 inches dropped by Hurricane Dennis ten days earlier as well as the rain from intermittent thunderstorms that kept the ground saturated in most places.

Pushed along by a low-pressure front moving in from the southwest, Hurricane Floyd passed through the state quickly. In its wake, the storm left an astonishing path of destruction. Many trees that had withstood the elements for decades were standing in waterlogged soil and got pushed over like bowling pins. But the costliest damage came not from the storm itself -- it came from the swiftly rising rivers and creeks that course through eastern North Carolina like a dense cluster of capillaries connecting the Piedmont Region to the Atlantic Ocean. 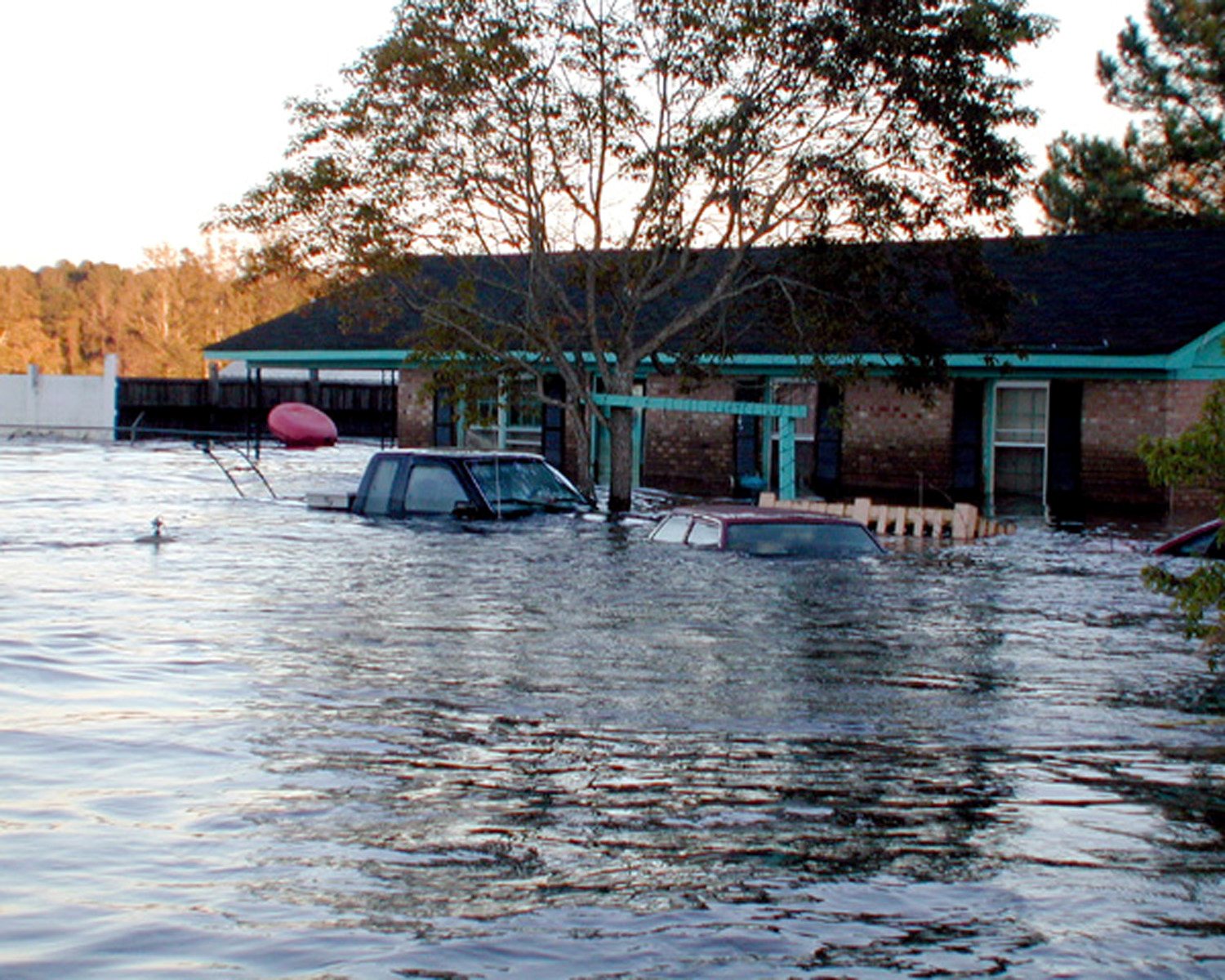 Pactolus, just north of Greenville, was accessible only by boat after Hurricane Floyd caused the flood-swollen Tar River to overflow its banks.

By midday on Sept. 16, the winds subsided and the sun peeked through the clouds. Despite the fact that electricity was out in many places and would be for days, people went back to work and otherwise things seemed to be returning to normal. Then that night, the Tar, Neuse, Roanoke, and Pamlico Rivers (and their tributaries) overran their banks and spilled over into urban areas, trapping people on the roofs of their homes and cars even as the waters washed away roads they might have used to escape. The waters rose and flowed into agricultural and livestock farms -- drowning millions of chickens and hundreds of thousands of pigs. Flood waters swept through sewage plants, contaminating the water supply in many communities. The waters finally crested as high as 24 feet above flood stage along the Tar River, where they all but erased the town of Princeville.

In all, Floyd claimed 51 lives and left thousands homeless. Most deaths came after the heavy winds and rains subsided and residents ventured outside, unaware that the rivers and creeks were rising as fast as 6 to 8 inches per hour. Hydrologists labeled this a 500-year flood event, meaning that a flood this severe is likely to occur only once every 500 years; or that it has only a 0.2 percent chance of happening in any given year. Initially, assessment experts estimated damages statewide to be about $1.3 billion, but that number rose to about $6 billion in the following weeks as stunned officials fully grasped the extent of the disaster. People were warned not to drink or bathe in water from taps for fear that it may harbor dangerously high levels of fecal coliform bacteria. 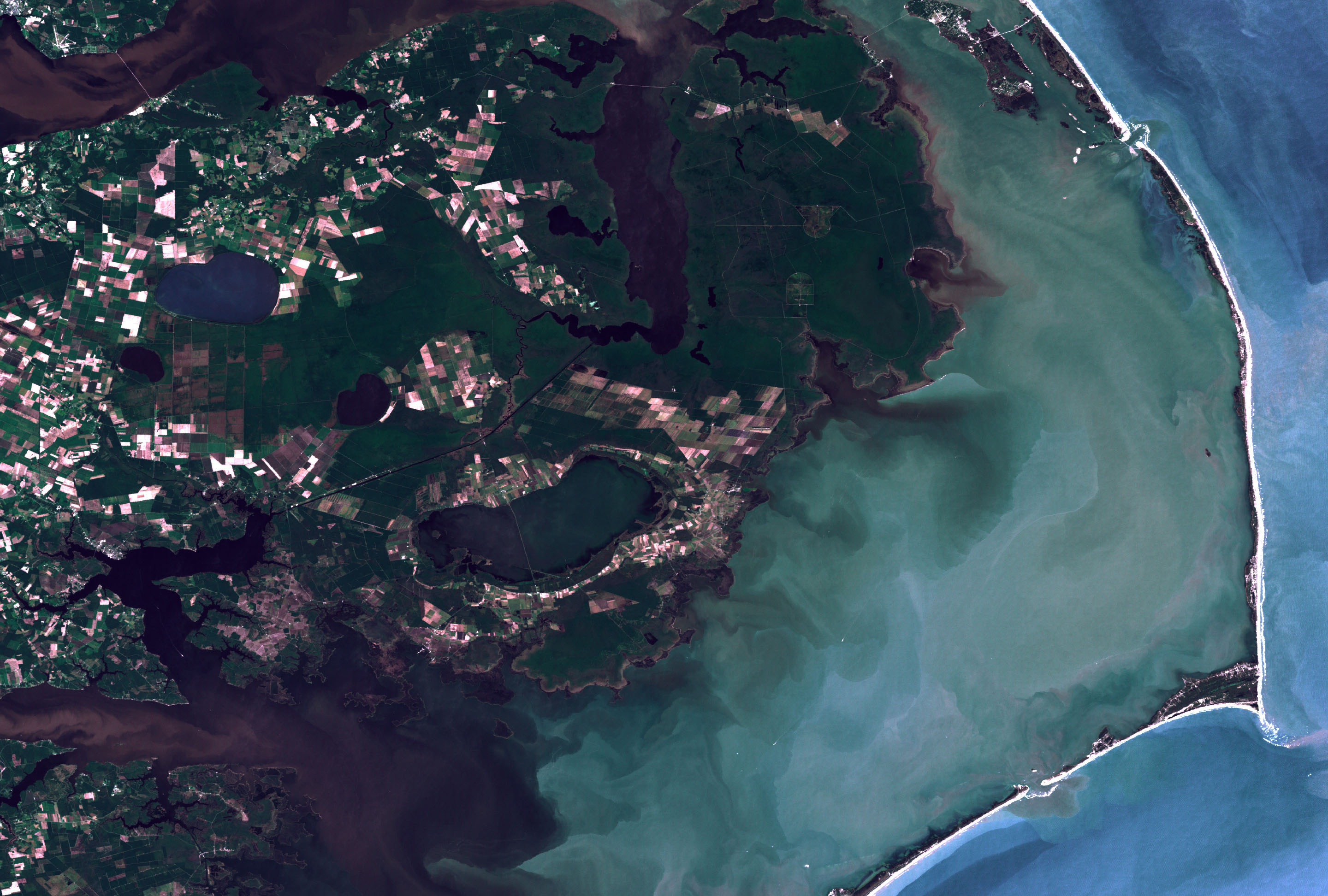 Brown sediments clogged coastal estuaries a week after the storm, as seen in this Landsat 7 image of the North Carolina coast taken November 5, 1999. Along with dirt swept away by the flood waters, the estuaries filled with human and animal waste, fertilizers, and pesticides.

Given the vast amount of sediment and sewage flowing through the waterways toward the coast, state officials predicted there would be massive fish kills in North Carolina's Pamlico and Albemarle Sounds, and that the dependent fish, shrimp, and crab industries -- which peak during the last four months of the year -- would be wiped out. News reports described an anticipated $19 million loss in 1999 shrimp harvests, so the state's General Assembly appropriated $11.4 million to help offset the damage. But the massive fish kills never happened, and in fact, the shrimp fishery had its best year since the state began keeping such records in 1972.

How can this be? What happened to all the sediment and pollution that was swept into the coastal ecosystem? What immediate effects did the runoff have on marine plants and animals? What will be the long-term effects of Hurricane Floyd? Scientists are only just beginning to arrive at answers to these questions, some of which are presented in the next two articles.

Hurricane Floyd's eye passed over most of the East Coast of the United States in September 1999.

On Sept. 15, 1999, Mother Nature poised herself to deliver the second in a one-two punch combination of hurricanes to hit North Carolina. Earlier, Hurricane Dennis jabbed once at the Carolina coast before doubling back and coming ashore as Tropical Storm Dennis on Sept." data-share-imageurl="">

This weather satellite image of Hurricane Floyd, from September 15, 1999, shows the immense size of the storm, stretching from Florida to Canada.