From the Outer Banks to Outer Bands

What are the key features of North Carolina’s climate? How many regions make up North Carolina’s geography? What are some of the ways the climate and environment shaped the state’s history?

Scientists describe North Carolina’s climate as humid subtropical. This means that there are warm summers with mild winters. There are three distinct regions in the state. They are the mountains, piedmont, and coastal plain. The mountains receive more rainfall than the other regions. The coastal plain experiences warmer temperatures.

Agriculture is an important part of North Carolina’s history and current economy. The state’s climate can create farming challenges. Short springs can cause problems during annual planting seasons. Yet, farms in the state still produce large amounts of goods for the nation. Some of these include tobacco, sweet potatoes, eggs, and fish. Natural disasters have shown how important agriculture is to the state’s economy. Several hurricanes have also revealed geographic vulnerabilities on the coast and in the piedmont.

What were some of the important natural events in North Carolina after 1950? How have recent storms pushed North Carolina residents to think about disaster preparedness?

Typically two hurricanes will make landfall in the southeastern part of the United States each year. North Carolina, and the southeast, are more susceptible to hurricanes for two reasons. First, hurricanes tend to move west after forming in the eastern and central parts of the Atlantic ocean. Second, Atlantic ocean temperatures are very warm in the spring and summer. The warm water provides a lot of heat energy to help form tropical storms and hurricanes and to contribute to their strength. The Gulf of Mexico also helps keeps the water temperature above 80 degrees. This creates the right conditions to sustain hurricanes as they approach coastal areas. And finally, North Carolina juts out into the Atlantic, making its coastal areas a perfect target for storms as they move up the coast. Take a look at a map of the United States, and you'll notice the position of the state, its coast, and Outer Banks.

The Development of Disaster Preparedness

Scientists and government officials began to devote more attention to hurricanes after several devastating storms. Hurricane Hazel made landfall near Calabash, N.C. on October 15, 1954. The storm formed off the coast of Grenada. Meteorologists categorize hurricanes based on wind speed. They use the Saffir-Simpson Hurricane Wind Scale. Category 3-5 storms register wind speeds above 110 miles per hour. Hurricane Hazel devastated Haiti as a category 2 storm before turning northwest. The warm waters in the gulf stream strengthened the hurricane. And Hazel was a category 4 storm by the time it made landfall in the U.S. Some of its winds reached 150 miles per hour. The storm pummeled the Carolina Coast. People from South Carolina to Canada felt its impact. Many scientists describe Hurricane Hazel as a once in a hundred-year storm. It still holds many records for its strength and the destruction it caused.

Since the 1990s, three storms in North Carolina have received a majority of the attention. The first was Hurricane Fran, which made landfall in September 1996. It was a category 3 storm when it crossed Cape Fear with 100-mile per hour winds. Records show that around 2 million people lost electricity between North Carolina and Virginia. This storm was especially notable for the damage it caused inland. We usually think of hurricanes as causing more damage to the coast, but Fran was different. There was more destruction inland. There was significant flooding as rivers crested across the Piedmont. The floods destroyed farms. There was significant property damage in the Raleigh-Durham area. And thousands of people went weeks without electricity. It was the first time in 40 years areas that areas farther west of the coast received that kind of damage. 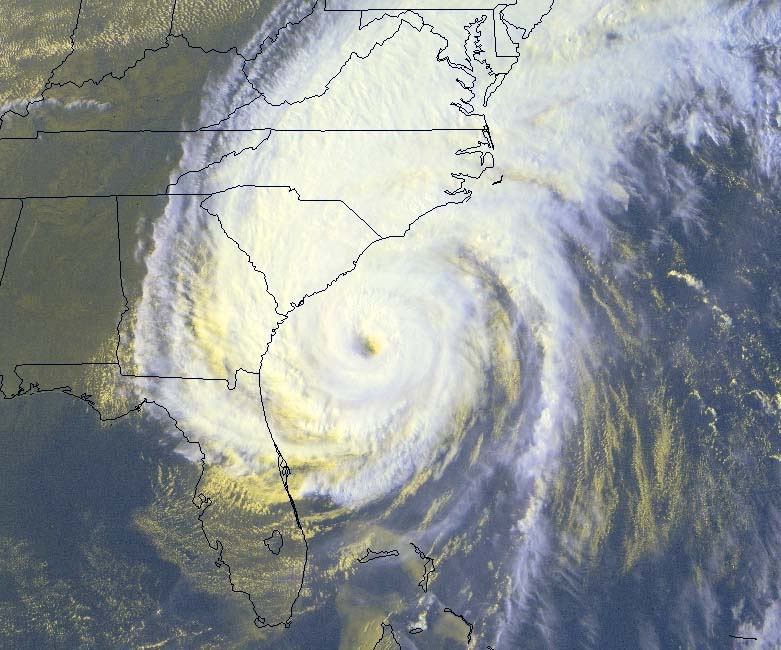 Three years later, Hurricane Floyd became another benchmark storm. In September 1999, Cape Floyd originated as a tropical storm near the Cape Verde islands. Floyd made landfall in the U.S. in Cape Fear on September 16th. It was a category 2 hurricane when it reached North Carolina. Heavy rainfall became the storm’s greatest impact. For example, Wilmington received 15 inches of rain in one 24 hour period. Some rivers rose 20 feet above the flood level. Emergency workers rescued 3,500 people from floodwaters. Ultimately, Hurricane Floyd led to the most damaging floods in North Carolina history.

In 2018, Hurricane Florence developed near the Cape Verde islands. The storm made landfall near Wrightsville Beach as a category 1 storm on September 14th. Like Hurricane Floyd, Florence caused a lot of flooding. The storm set records with storm surges between nine and 13 feet. Hurricane Florence led to more discussions about climate change. Many scientists argued that global warming increased the strength and impact of hurricanes.

These storms helped improve the state's disaster preparedness. Officials want to decrease hurricane destruction along the coast and further inland. Many counties approved new infrastructure codes. These rules make buildings less vulnerable to wind and flood damage. There are also efforts to help the state track, prepare for, and respond to storms.

Some of this work includes anticipating the impacts of climate change. Coastal erosion refers to the loss of land that causes local water levels to rise. Human activities like development and land clearing cause some erosion. Tropical storms also increase coastal erosion. Global warming increases ocean temperatures. As a result, there will be stronger and more frequent tropical storms. Scientists expect this will result in major property damage and more erosion. Places like North Carolina will deal with the consequences. This will add more stress for people who live and work along the coast.

How can you and your classmates try to decrease the impact or speed of climate change in North Carolina?

From the Outer Banks to Outer Bands

What are the key features of North Carolina’s climate? How many regions make up North Carolina’s geography? What are some of the ways the climate and environment shaped the state’s history?