To feed the 3.5 million men in active service by the end of the war, the military needed massive quantities of food. Feeding soldiers in camp and sailors on ships was hard enough, but feeding an army on the march has always been one of the great challenges of war. Food for mobile armies had to pack a lot of calories into a small, lightweight package.

In past centuries, armies on the march might "live off the land," which was a polite way to say they stole from the people whose land they tramped across. During the American Civil War, armies got by mostly on hardtack and salt-preserved meat. But by 1942, doctors and scientists knew that although rations of hardtack and salt-preserved meat would keep men alive, they wouldn't keep them in top fighting condition. People needed vitamins from fruits and vegetables to stay healthy.

Since the late nineteenth century, industries in the U.S. had been developing new ways to preserve and process food. Now, these techniques could be used to develop rations for soldiers.

The military developed various kinds of "field rations" to feed soldiers and sailors in different situations. Between 1936 and 1941 these rations were divided into four types:

During most of World War II, a C-ration contained three cans of M (for Meat) units, three cans of B (for Bread and dessert) units, and one accessory pack. M and B units were designed in pairs to be eaten for breakfast, dinner, and supper. B units might contain biscuits, compressed and premixed cereal, candy-coated peanuts or raisins, soluble coffee, sugar, lemon- or orange-juice powder, hard candies, jam, cocoa beverage powder, or caramels. The accessory packet included nine cigarettes, water-purification tablets, salt tablets (to prevent heat exhaustion), matches, toilet paper, chewing gum, and an opener for the meat cans. Options for canned meats included meat and beans; meat-and-vegetable stew; meat and spaghetti; ham, egg, and potato; meat and noodles; pork and rice; frankfurters and beans; pork and beans; ham and lima beans; and chicken and vegetables. Other options were scrapped almost immediately because so many soldiers complained about them.

The military also developed a K-ration that could be used in assault and combat situations, and in particular by paratroopers. A K-ration was packed in three boxes for three meals that giving a total of 3,726 calories but weighed only 33 ounces. Packaging was designed to survive temperatures from -20°F to 135°F it weighs only 32.86 oz. and contains 3,726 calories. Each meal consisted of a canned meat or cheese product and biscuits, and might also include a compressed cereal bar, a fruit bar or candy bar, toilet paper, sugar, salt, instant coffee, cigarettes, and matches.

In all, more than a billion rations were produced during World War II.

World War II and the Quest for Time-Insensitive Foods

from the University of Chicago Press

'C-Rats' Fueled Troops During and After World War II

from the U.S. Department of Defense

This documentary film, produced by the U.S. Office of War Information in 1943, explained the nutritional needs of soldiers and the science and technology that went into developing field rations. You can decide for yourself whether the rations look as tasty as they were advertised to be.

A K-ration, designed for short-term use in the field, contained three meals in lightweight boxes. 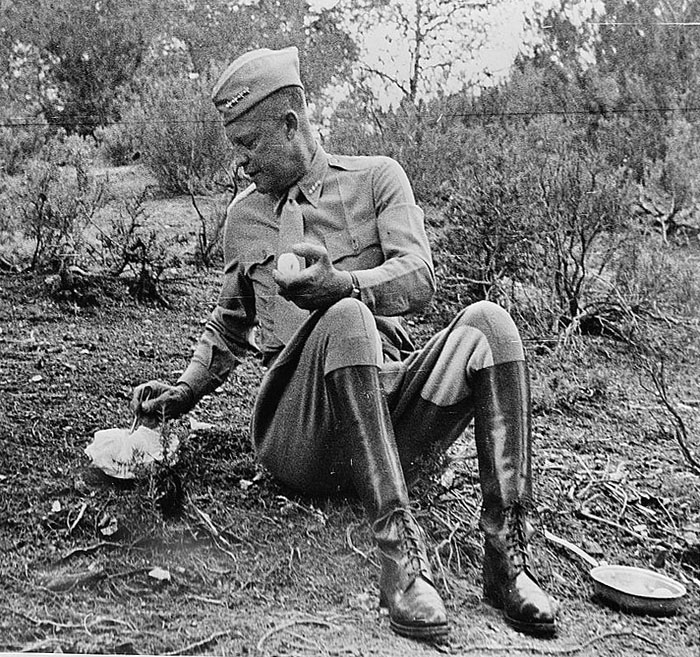 Gen. Dwight Eisenhower was photographed eating a C-ration while on an inspection tour in North Africa in 1943.