The Blue Ridge Parkway, stretching 469 miles between the Shenandoah and Great Smoky Mountains National Parks, has offered visitors breathtaking vistas, wilderness access, and a reprieve from fast-paced commercialism since the mid-1930s. It is positioned atop the rims and contours of the Blue Ridge, a mountain chain that is part of the larger Appalachian Mountains.

Work began on the road in September 1935, near Cumberland Knob in North Carolina, during the administration of Franklin D. Roosevelt. Originally called the “Appalachian Scenic Highway”, in 1936 the U.S. Congress formally authorized the project as the “Blue Ridge Parkway” and placed it under the jurisdiction of the National Park Service.

Though implemented during the Great Depression due to a need to create jobs, the actual idea for the Parkway dates back to an earlier generation. America in the early 20th century was worried about the effects of urbanization and industrialization on its population. Throughout the country, politicians, planners, physicians, and philanthropists worked to reintroduce the benefits of the natural world into one increasingly identified as contaminated, artificial, and unhealthy. Designer Frederick Law Olmstead was recruited to create manmade environments that would blend into their natural surroundings in places like New York’s Central Park and the Biltmore Estate in Asheville, NC. In fact, the term “park-way” was chosen to describe the thread of soft green that Olmstead wove through the hard iron and concrete of New York City. Thus, when it came time to plan the “Appalachian Scenic Highway” in the early 1930s, it was fitting that the folks in Washington contacted not first an engineer, but a landscape architect. Consequently, it was no surprise that the lead architect chosen, Stanley Abbott, drew his inspiration and creativity from the father of the modern American “parkway”, Frederick Olmstead.

As the Blue Ridge Parkway route was being mapped between the Shenandoah and the Great Smoky Mountain National Parks, a bitter debate emerged between Tennessee and North Carolina – specifically between the cities of Knoxville and Asheville. It was recognized that the Parkway would bring with it both visitors and economic benefits. Secretary of the Interior Harold Ickes ultimately chose North Carolina for three reasons: the state already had two national forests (Pisgah and Nantahala) that could be used as a corridor for the Parkway, North Carolina was considered more scenic, and because Tennessee had previously been awarded New Deal projects like the Tennessee Valley Authority.

As a result, the route for the project was selected, 217 miles in Virginia and 252 miles in North Carolina. The Works Progress Administration did roadway construction. Personnel from the Emergency Relief Administration were responsible for landscape and recreation areas. However, most of the work was completed by crews from four Civilian Conservation Corps (CCC) camps. These camps hired local labor, reemphasizing the regional economic stimulus goals of the project. Of interest, when WWII arrived, work on the Parkway continued by using conscientious objectors employed by the Civilian Public Service program. By the time the CCC was closed out in 1942, the Parkway was two-thirds completed. From that point on, work on the remaining sections was sporadic. It was not until 1987, with the completion of the Linn Cove Viaduct, that the Blue Ridge Parkway was finally connected from beginning to end.

It is significant to note the Blue Ridge Parkway is much more than an achievement of national infrastructure. It is truly an exhibit concept in both regional and cultural heritage. Traveling the Parkway is a journey through history. Fields cleared centuries ago for agriculture by Native Americans are still visible. Surviving are homestead structures built by early Appalachian pioneers. Old industry is evident by remnants of narrow-gauge railways tracks used in mining and logging operations, miller’s wheels, whiskey stills, and blacksmith shops.

Blending old with new characterizes the abundance of traditional mountain handicrafts. With over 250,000 visitors a year, the Folk Art Center in Asheville is the most popular attraction along the Parkway. It houses the Southern Highland Craft Guild’s 100 year-old Allanstand Craft Shop, exhibitions in three galleries, a library, and an auditorium.

The physical characteristics of the Blue Ridge Parkway are significant. There are twenty-seven tunnels, all constructed through solid rock – with 26 of the 27 located in North Carolina. It is due primarily to the tunnels that much of the Parkway is closed throughout late fall, winter, and early spring. (Due to dripping groundwater from above, freezing temperatures, and the lack of sunshine, ice often accumulates inside the tunnels even when the surrounding areas are above freezing). The 469-mile Parkway is the longest, narrowest, and most visited National Park in the country and is carried across streams, railways ravines, and cross roads by 168 bridges and 6 viaducts. The speed limit is never higher than 45 and lower in many places. The highest point on the Parkway, at an elevation of 6047 feet, is south of Waynesville, North Carolina near Mount Pisgah on Richland Balsam Mountain at Milepost 431.

Speaking of mileposts, they begin with Milepost 0 at the southern terminus of Shenandoah National Park's Skyline Drive in Virginia and conclude with Milepost 469 at Oconaluftee in the Great Smoky Mountains National Park near Cherokee, North Carolina. The mileposts are used by visitors, published guides, and the National Park Service to recognize dozens of various points of interest along the route. Several include:

Representing geographic and demographic periods ranging from the wilderness of Native Americans to the early generations of motoring vacationers to the future of historic interpretation and heritage tourism, the Blue Ridge Parkway is a true cultural treasure. It allows visitors to experience how humankind strives to shape the environment in an attempt to provide the best possible solution for coexistence with the natural world. The Blue Ridge Parkway is a real and virtual monument to education, construction, preservation, and conservation – of which we can all take pride. 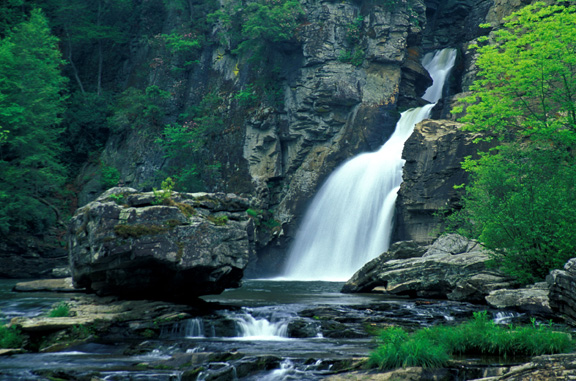 Linville Falls is one of the sights along the Blue Ridge Parkway. 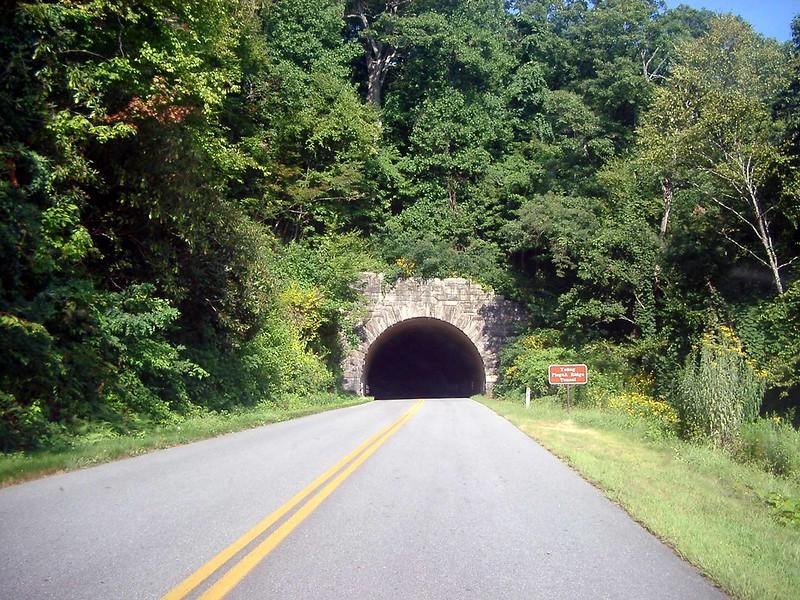 The Young Pisgah Ridge Tunnel in Buncombe County is one of twenty-seven tunnels along the Blue Ridge Parkway.

The Lynn Cove Viaduct on the Blue Ridge Parkway.

Here, a truck helps route supplies to build a tunnel for the Blue Ridge Parkway.