Searching for Greener Pastures: Out-Migration in the 1800s

Frederick Marryat, an English visitor traveling through the Ohio Valley in 1838, was surprised at the stream of emigration which appears to flow from North Carolina to Indiana, Illinois, and Missouri. Every hour you meet with a caravan of emigrants from that sterile but healthy state. Every night the banks of the Ohio are lighted up with their fires.

Marryat’s observations were not unusual during the first half of the 1800s. North Carolina was the third most populous state in the Union in 1790, but by 1860 it had dropped to twelfth in population. Hundreds of thousands of White North Carolinians fled the state during those years, seeking cheap, fertile land in Tennessee, western Georgia, Indiana, Alabama, Missouri, Mississippi, and other trans-Allegheny states and territories. Thirty percent of North Carolina’s native-born population, amounting to more than four hundred thousand persons, was living outside of the state in 1860.

The migration west actually began before the Revolutionary War (1775–1783), as adventurous North Carolinians followed Daniel Boone in search of new frontiers beyond the mountains. After the war, veterans of the Revolution were rewarded with free land in what became Tennessee. Land speculators also rushed into that area in search of wealth.

Among these speculators were members of the Polk family of Mecklenburg County. By 1806 Samuel Polk and his young family joined their kinsmen on the Tennessee frontier. Sam’s oldest child was eleven-year-old James K. Polk. Born in North Carolina, he went on to become the eleventh president of the United States.

After the War of 1812, the caravans of wagons moving west increased, but the reasons were different. North Carolina had become known as the Rip Van Winkle State. State leaders opposed spending tax money on schools, roads, agricultural reforms, or any other form of economic advancement. Their opposition hurt the state’s people. Without good roads to get crops to market, farmers could not make profits. Without progressive leadership in agricultural reforms, farmers did not learn about the importance of crop rotation. Instead, they continued old farming practices that used up nutrients in the soil and exhausted the land. Although newspapers and reformers pointed out the high degree of ignorance and poverty in which people lived, state leaders seemed to pay no attention to the needs of the people. Disgusted by the state’s do-nothing policy, farmers gave up on their exhausted lands and moved west, where they could find cheaper, more fertile land to farm. In 1834 a Raleigh newspaper reported that "our roads are thronged with emigrants to a more favored Country." As late as 1845, a Greensboro newspaper proclaimed, "On last Tuesday morning nineteen carts, with about one hundred per-sons, passed this place, from Wake County, on their way to the West."

these caravans consist of two or three covered wagons, full of women and children, furniture, and other necessaries, each drawn by a team of horses; brood mares, with foals by their sides, following; half a dozen or more cows, flanked on each side by the men, with their long rifles on their shoulders; sometimes a boy or two, or a half-grown girl on horseback.

Young, energetic, and ambitious citizens were leaving. Many of these talented North Carolinians later became presidents, vice presidents, and cabinet members of the United States government, as well as governors and congressmen for their adopted states. Presidents Andrew Jackson, James K. Polk, and Andrew Johnson were among the future leaders who left.

Conditions in North Carolina did not begin to improve until a progressive political leadership gained control of the state in 1835. The state constitution was rewritten to create a state and local government that was more democratic and responsive to the people. Even then, progress was slow.

In 1840 the first public school was established. Soon railroads were introduced, with tracks stretching across the state. Plank roads and other internal improvements developed. Manufacturing began to flourish. At last North Carolina could shake its Rip Van Winkle image. Once White North Carolinians felt they could prosper at home, the massive emigration of White citizens out of the state began to decline.

emigration which appears to flow from North Carolina to Indiana, Illinois, and Missouri. Every hour you meet with a caravan of emigrants from that sterile but healthy state. Every night the banks of the Ohio are lighted up with their fires.

Marryat’s observations were not unusual during the first half of the 1800s. North Carolina was the third most populous state in the Union in 1790, but by 1860 it had dropped to twelfth in population." data-share-imageurl=""> 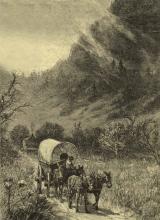 During and after the Revolution, residents of Virginia and North Carolina began following Daniel Boone’s “Wilderness Road” over the mountains into Kentucky and Tennessee.