Country of origin and citizenship

Most of the Latinos in North Carolina are of Mexican origin (65.1%). Puerto Ricans (who are US citizens) comprise 8.2% of the North Carolina Latino population, and Cubans or Cuban-Americans are 1.9%. The remaining 24.8% are from other Central or South American countries, or other Hispanic categories. In contrast, Latinos in the United States are a little less likely to come from Mexico (58.5%). They are slightly more likely to be from Puerto Rico (9.6%), or Cuba (3.5%). A little more than one quarter (28.4%) of Latinos nationally are from other countries.

Nearly two-thirds of the North Carolina Latino population are foreign-born (64.2%) (Table 2:1). Almost all of North Carolina's foreign-born Latinos are non-citizens (58.3%); only 5.9% have been naturalized. In contrast, a little less than half of Latinos nationally (45.1%) are foreign born. Of these, 13.6% have been naturalized, and 31.5% are non-citizens. People reside in the US under many immigration classifications. When we refer to "non-citizens" we are referring to those who have not been naturalized as US citizens. However, citizenship is not required to live in this country legally. Millions of foreign nationals currently live legally in the United States without citizenship. They may hold student, tourist, or special work visas (such as J-1, H-1A, H-1B, H-2A). Thousands of "non-citizens" serve in the US military. Many foreign nationals who live in this country for long periods of time never become naturalized citizens. Those that do become citizens may go through a process that can take years. As North Carolina has a more recent immigrant community, we have a larger proportion of non-citizens who are part of the population.

The Latino community is one of tremendous diversity. North Carolina Latinos come from many different geographic backgrounds. Some of them are united as an ethnic group by a common heritage derived from Spanish language and culture, while others share cultural heritages unique to their countries of origin. The commonalities and differences between Latin American subgroups are often debated; however, key traits that seem most often shared among Latinos include a connection with the Spanish language, strong family relationships and a strong family orientation. Recent Latino immigrants tend to have lower educational and occupational attainment compared to other Americans, and a strong connection with religion, particularly the Roman Catholic Church.

The growth of the North Carolina Latino population reflects both an increase in immigration and an increase in the number of Latino births. Latinos have a higher birth rate than do other population groups. The number of Latino births has increased more than seven-fold, from 1,752 in 1990 to 12,544 in 2000. Because of the recent immigration and high birth rates, North Carolina Latinos are younger than the general population. The median age of all people living in North Carolina is 35.3 years whereas the median age of Latinos is 24.

Chart 2:2: Occupation for the employed civilian population 16 years and older (2000)

Almost one tenth of Latinos reported being employed in farming, fishing, or forestry in the 2000 Census. However, the actual number of Latinos employed in the agricultural industry is probably higher, as migrants who work in North Carolina may not be fully counted in North Carolina's Census numbers. North Carolina is the fifth most populous farmworker state in the US, behind California, Texas, Washington, and Florida. Some experts suggest that there are more than 100,000 migrant and seasonal farmworkers working in North Carolina throughout the year. Of these, approximately 60,000 are Latinos. In 2002, the NC Employment Security Commission (ESC) counted 108,900 migrant, seasonal, year-round and H-2A workers working in North Carolina fields. Taking into account the limitations of these estimates, and including dependents, NC's farmworker population is estimated to be over 200,000. The work of Latinos helps drive the state's economy. North Carolina's tobacco, greenhouse and nursery, vegetable and fruit industries rely heavily on the labor of farmworkers, producing more than $2.2 billion in sales.

Although Latinos are more likely to be employed than other racial or ethnic groups, they are also the most likely to live in poverty; i.e., they have family incomes below the federal poverty guidelines ($18,100/year for a family of four in 2002). While Latinos comprise only 4.7% of the state's population, they comprise 10.4% of all poor people in the state. More than one quarter of North Carolina Latinos live in poverty (27.4%), which is slightly higher than African Americans and much higher than non-Latino whites (Chart 2:3).

Chart 2:3: Percentage of North Carolina population that lives in poverty (2000)

Latinos are present in all of North Carolina counties; however, they tend to be concentrated in the Eastern, metro, and military areas of the state (Map 2:1). The presence of Latinos in smaller counties is significant. Indeed, five counties in NC have a reported Latino population of 9% or higher; and another 14 counties have a Latino population of 6% or higher.

Map 2:1: North Carolina Latinos as a percent of total county population, 2000 (see above) 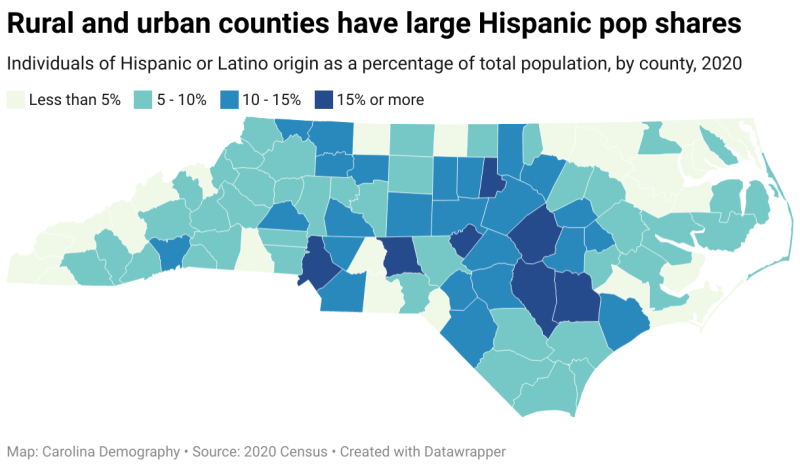