Along with the loss of homes, Hurricane Floyd created an agricultural nightmare. Unimaginable numbers of livestock from across Eastern North Carolina drowned in the flood - an estimated 30,000 hogs, 700,000 turkeys, and 2.4 million chickens. Officials were faced with the grim task of collecting the animal bodies and incinerating them 24 hours a day in 3 counties to avoid a threat to public health. Thousands of farms were affected when the flood waters erased years of careful landscaping and planning of fields in a matter of a few short days.

Since 1999, the North Carolina Department of Agriculture and Consumer Services created an Emergency Programs Division. The division works to make the state's agriculture less vulnerable to disaster, disease or terrorist attack, coordinating efforts with other state and local agencies on disaster planning and response. 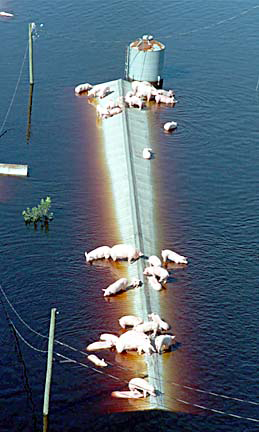 Hogs fleeing the floodwaters escaped to the roof of this farm building.