Small Arms in the Civil War

At the beginning of the Civil War, firearms of all types were in short supply. Many early volunteers were issued antiquated, imported, and nearly obsolete weapons as both sides strained to meet the demand for arms. Eventually, however, a few quality types were obtained in large numbers and became standard issue to the soldiers of both armies.

Infantry soldiers were those who marched and fought on foot. The basic weapon of an infantry soldier was the single-shot, muzzle-loading percussion musket. Foremost among these was the Springfield, manufactured at the U.S. Armory in Springfield, Massachusetts, and at other locations. All were generically referred to as "Springfields" by the troops. By the end of the war, total production approached 1.5 million weapons. The Springfield had a 39 inch long rifled barrel, and could fire a .58 caliber bullet effectively at targets 500 yards distant. After the Confederate capture of the Federal armory at Harper's Ferry, Virginia (later West Virginia), more than 64,000 Confederate copies were produced.

A close competitor to the Springfield, and the best of the foreign-made weapons, was the British Enfield. These were imported by both North and South in numbers exceeding 800,000. The Enfield fired bullets of .577 caliber the same distance as a Springfield, and the ammunition was interchangeable between the two. Externally, there were few differences.

Nevertheless, some officers felt a decided bias against the Enfield. "They are rough, and tear the men's hands to pieces when going through the manual (of arms)" one officer complained. Ordnance officers noted that the hand-finished parts of an Enfield did not interchange, as did those of a machine-made Springfield. Col. Joshua Chamberlain, commanding the 20th Maine regiment, noted the number of abandoned Springfields around his position on Little Round Top after the fighting there on 2 July, 1863, and instructed his men still using Enfields to exchange them for Springfields.

A variety of other European rifles were used by the infantry of both sides. Among the most prolific of this "second class" of rifled arms was the Austrian Lorenz. Over 225,000 were purchased by the Federal government alone. Many of these .54 caliber rifles were rebored to accept the standard .58 caliber ammunition.

While rifles were preferred for their long range and accuracy, many older smooth-bore muskets of foreign and domestic manufacture saw service as well. Chief among these was the 1842 Springfield. This weapon had a 42 inch long, .69 caliber barrel. It fired one solid .69 caliber round lead ball, along with three small buckshot. Produced until 1855 at Springfield, Massachusetts and at Harper's Ferry, Virginia (now West Virginia), 172,000 were made. Some of these (about 10,000) were later rifled in the pre-war period.

The bulk of these, however, were issued as smoothbores to Civil War troops. Without the extra range of a rifle, soldiers so armed found themselves handicapped against an enemy armed with rifles. In his Memoirs, General U. S. Grant observed that, using such an arm, "you might fire at a man all day from a distance of 125 yards without him ever finding it out." At Gettysburg, one such Federal unit (the 12th N.J.) held its fire until charging Confederates were within 100 yards and then opened fire, "...giving them volley after volley of buck-and-ball from our smoothbore muskets, cutting great swaths in their ranks."

Calvalry soldiers were those who rode on horses during battle. The principal shoulder weapon of the mounted services was a short-barrelled carbine. These were effective out to 200 yards. Numerous designs appeared early in the war, and close to 20 different types were eventually adopted by Federal forces. They ranged from fairly simple single-shot breechloaders using a paper or linen cartridge and a percussion cap, to complex repeaters firing self-priming metallic cartridges. Calibers ranged from .44 to .54, and many carbines took specially made cartridges. Resupply of ammunition often proved tedious. 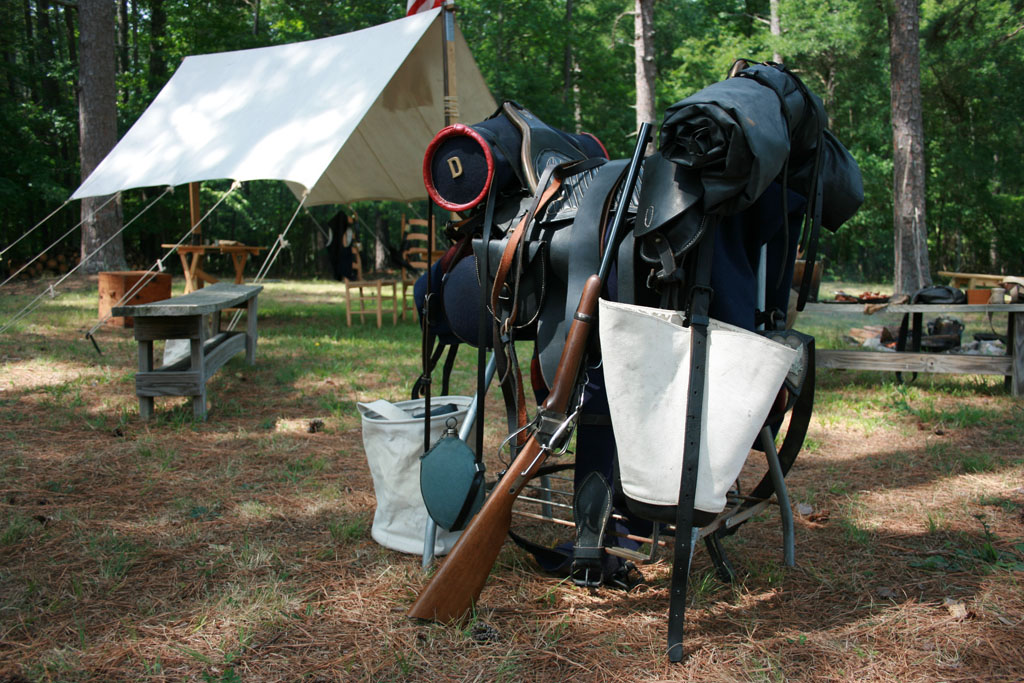 One mainstay of the cavalry on both sides was the Sharps. In production since the early 1850's, this .52 caliber arm was already known to be strong and reliable, and about 80,000 were purchased by the Federals. The Sharps was the primary weapon of General John Buford's division as it delayed the Confederate infantry advance towards Gettysburg on 1 July, 1863. Even though a single-shot, its breech-loading mechanism allowed a trooper to get off up to 5 shots per minute, against possibly 3 from a muzzle-loading musket.

As with the Springfield, the Confederates made their own copies of the Sharps, but demand far outstripped production. Only about 5,000 Confederate or "Richmond" Sharps were made. Of these, General Robert E. Lee wrote that they were "so defective as to be demoralizing to our men." Southern horsemen had to make do with captured Yankee breech-loaders, for which ammunition might be hard to come by, or stick with awkward short-barrelled muzzle-loaders, for whom cartridges could be produced locally. A few Southern arsenals, most notably the Richmond Arsenal in Virginia, the Fayetteville Arsenal in North Carolina and the Cook & Brother Armory of Athens, Georgia, attempted to manufacture muzzle-loading carbines for Confederate troopers. Production was slow and erratic, and never met the needs of the men in the field.

If the shortage of good, serviceable single-shot breech-loading carbines did not vex the Confederate cavalryman, the appearance of reliable repeaters in the hands of his foes must surely have.

One such weapon was the Spencer, patented in 1860. Available in .52 caliber, it was capable of sending out seven aimed shots within thirty seconds. The effects of such firepower were overwhelming to Confederates used to the slower muzzle-loaders. Often, Federals with Spencers fired only one shot together to simulate a volley of musketry and waited for the Confederates to advance. When they did, the Unionists unleashed the other six shots in a rapid fusillade of fire that devastated the Southern lines. One Confederate observed, "There's no use fighting against such guns..." Over 94,000 carbines were acquired for use by Federal forces. None of them were used at Gettysburg, but the 5th and 7th Michigan regiments of General Custer's brigade were armed with the longer rifle version, and did good service with them there. One Michigan trooper, Robert Trouax, later distinguished himself with his Spencer rifle at the Rapidan River,"killing six rebels as they were crossing the river".

Another repeater held in high esteem was the .44 caliber Henry Rifle. Carrying 16 shots, it too put a Confederate opponent at a severe disadvantage. While only 10,000 Henry Rifles were made, and only 1,731 purchased by the government, their presence on the battlefield was felt by the Confederates. Stated one of General William T. Sherman's soldiers: "I think the Johnnys are getting rattled; they are afraid of our repeating rifles. They say we are not fair, that we have guns that we load up on Sunday and shoot all the rest of the week."

The ill-supplied Southern trooper could not hope to match the firepower of these repeating weapons, for they utilized special copper rim-fire cartridges that were beyond the production capability of Confederate ordnance. In the case of handguns, though, both sides were more evenly matched. The manufacturing centers for these weapons were still located in the North, but few designs required the use of special ammunition. Captured revolvers were much more easily (and hence much more often) turned against their former owners.

The most prolific maker of handguns in the Civil War era was Samuel Colt. During the conflict his Hartford, Connecticut firm produced nearly 150,000 .44 caliber six-shot revolvers (the 1860 "New Model Army"). The vast majority of them went to the Union war effort, but Colt sold arms to all buyers until a few days after the firing on Ft. Sumter. These guns were durable and powerful. From 16 yards, a bullet from a Colt Army revolver penetrated seven white pine boards, each 3/4" thick, separated by one inch of dead space between them. Colt also manufactured a "Navy" model revolver in .36 caliber. Introduced in 1851, the Navy was widely available in the South, and a favorite arm of Confederate horsemen. Before the war's end, 185,000 Navy revolvers had been produced.

Another major supplier of revolvers to the Federal government was the firm of E. Remington and Sons, of Ilion, New York. Beginning in 1858, Remington introduced an improved series of simplified revolver designs that featured a solid frame, which made the arm stronger and cheaper to produce than its primary competitor, the Colt. The War Department purchased approximately 114,000 .44 and .36 caliber Remington revolvers at $12.00 per gun, while Colt was still charging $25.00 for their New Model Army.

This considerable difference in price cost Colt's much government business during the latter half of the war. Less expensive than a Colt, the Remington was an eminently serviceable handgun. At the close of the conflict, when discharged Federal cavalrymen were given the option to purchase their issue sidearm, more Remingtons were sold than Colts.

A variety of other firms also supplied revolvers to the Federal forces in limited numbers. Whitney, Allen, Savage and others provided less than 40,000. Smith and Wesson made small, metallic cartridge .22 and .32 caliber revolvers during this time, and these were sold in small lots or purchased privately.

Many foreign-made revolvers were imported and used by both sides. The French Lefaucheux "pin-fire", which took a special .45 caliber cartridge, armed many Federal troops in the Western theater. The Confederates purchased several thousand 5-shot "Kerr" revolvers, and a number of other types as well. The best-known of these, however, was the Le Mat. Developed in pre-war New Orleans, Louisiana, by Dr. Alexander Le Mat, this pistol fired nine .42 caliber bullets in addition to a .63 caliber shotgun charge.

Although a colorful pistol, and associated with such personalities as Confederate generals P.G.T.Beauregard, J.E.B. Stuart, and Captain Henry Wirz, relatively few were manufactured. Production problems proved difficult to overcome, and less than 3,000 were produced in France and England.

Confederates also made their own revolvers, although in numbers far short of Federal production. It is estimated that less than 10,000 Confederate handguns were manufactured, mostly in Georgia. Southern arms-makers were cursed with a lack of proper materials to work with. Steel was not available, and brass and iron were often substituted. Brass was scarce, and the bells of many Southern churches were donated "for the Cause" and melted down to supply it. That brass became pistol frames in some Confederate revolvers.

The most successful Confederate revolver maker was the firm of Griswold and Gunnison. Between July of 1862 and November, 1864, nearly 3,600 pistols were produced in Griswoldville, near Macon (about 70 miles south of Atlanta). "Griswolds", as they were called, were .36 caliber brass-framed copies of the Colt Navy. While production totals do not compare favorably with that of the Colt company in Connecticut, it is interesting to note the following: The Griswold factory was operated by 24 people, 22 of whom were enslaved!

Another Confederate firm, Spiller and Burr, produced a solid-frame Whitney pattern .36 caliber revolver. They made around 750 brass-framed copies in Atlanta. Production was unbearably slow, however, and the Confederate government bought the facility and moved it to Macon. There another 689 guns were completed before December of 1864.

By December of 1864, arms were no longer in short supply. The production ability of Northern industry, coupled with massive importations of arms by both sides, led to a surplus of Civil War-era small arms that existed well into the second decade of the twentieth century. Even now, weapons from the era are occasionally discovered. If you find one, treat it carefully. The last shot of the Civil War may not yet have been fired.

In this first reenactment video, reenactors portraying Union soldiers in the Civil War demonstrate the firing of a musket.

In this second reenactment video, a Union cavalry officer explains the weapons and equipment carried by cavalry in the Civil War. 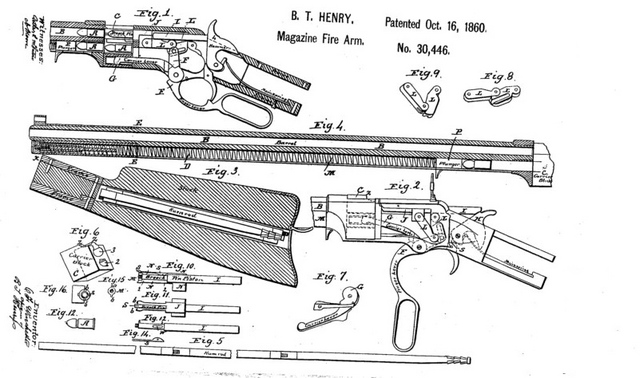 Patent drawing for the Henry rifle, invented by Benjamin Tyler Henry in 1860. Repeating rifles like the Henry gave Union troops a tremendous advantage in the field. 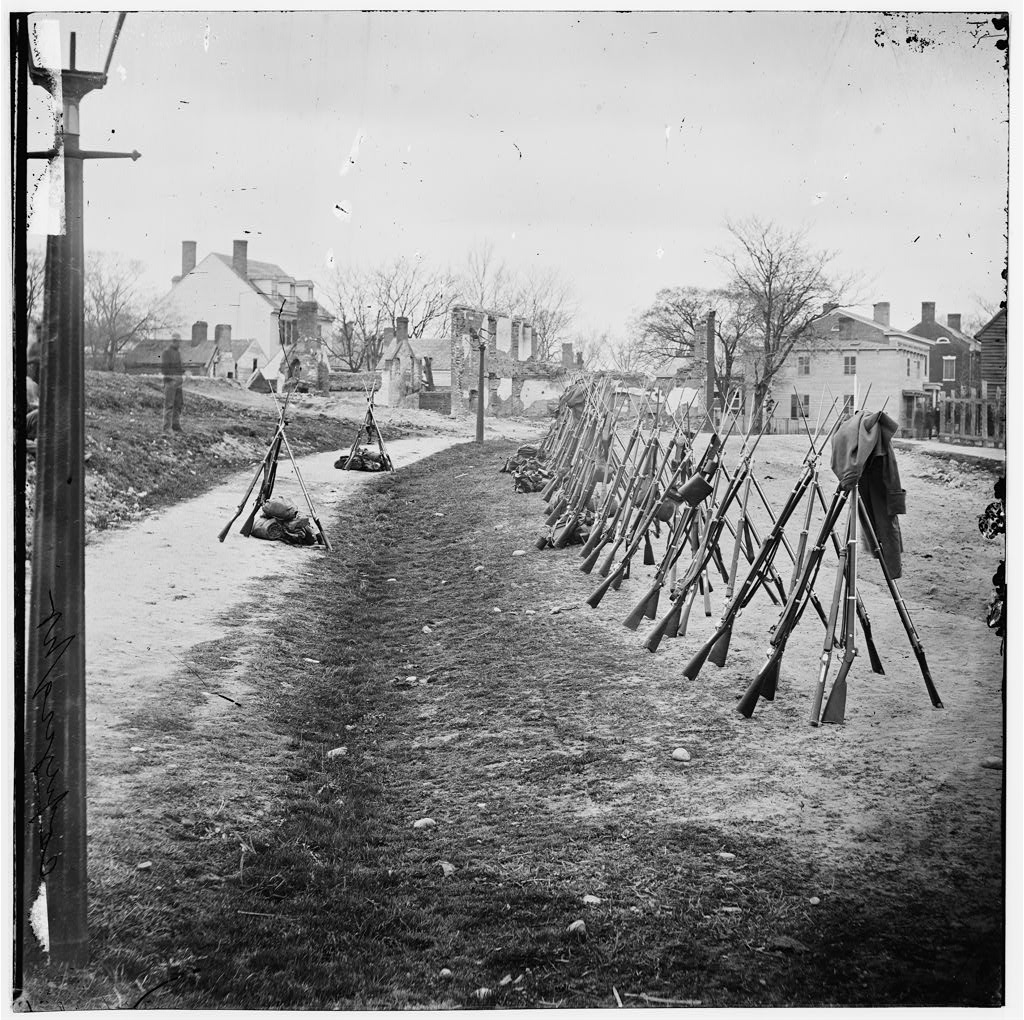 In Petersburg, Virginia, a row of Union rifles stand stacked against each other. 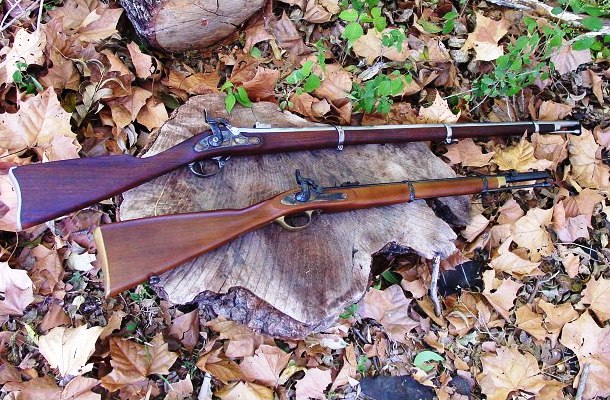 A Springfield rifled musket (above) and an Enfield musketoon