Economic Change: From Traditional Industries to the 21st Century Economy

The 1970s and 1980s were a difficult time for North Carolina’s traditional industries. For the previous 100 years, the tobacco, textile, and furniture industries had made the state prosperous. But these industries started to feel pressure after the Second World War. Other countries started operating factories with lower wages. Companies also developed new technologies that required fewer workers. As a result, many companies in traditional industries relocated and closed some plants. The number of textile workers in the state declined by 82,000 between 1973 and 1986. During the same time, the number of furniture workers decreased by 28,000 between 1990 and 2003.

Many large and well-known companies shut down during this period. Cone Denim in Greensboro, Cannon Mills in Kannapolis, and White Furniture Company in Mebane all shut down in the decades after 1980. And in each case, the mill was the economic cornerstone of the town. American Tobacco in Durham was another well-known shutdown. This campus housed one of the world’s largest tobacco factories. The company had been open since the late 1800s. It provided some of the highest paying jobs in Durham and had helped the city become one of the South’s wealthiest. The factory closed in 1987, as the jobs were either cut, moved to Reidsville, or sent overseas. After the closure, the factory buildings were abandoned for almost 20 years.

The closing of tobacco, textile, and furniture companies devastated the state’s economy. Large cities such as High Point, Winston-Salem, and Durham lost most of their industry. And smaller cities, like Rocky Mount, experienced the same. Many buildings went empty, and thousands lost their jobs. With the loss of high-paying factory positions, more people were forced to work low-wage jobs in service industries. The loss was especially felt by Durham. The city’s downtown decline led to a decline in reputation that lasted for decades.

The effects on smaller towns were even more harmful. Some towns depended on one factory for their economy. Once these factories closed, the towns were almost deserted. Storefronts were boarded up, and many local businesses never returned. Williamston, a town on the Roanoke River, lost over 20% of its population between 1960 and 1990. Nearby Scotland Neck lost more than 15%. The people of these towns were left in a state of depression. When the textile mill in Franklinton closed in 1991, one former employee commented, “Franklinton is dying fast… Soon, it will be to where there just won’t be anything left.”

The state's economy eventually began to rebound. Textile companies in cities like Charlotte and Winston-Salem had fueled the growth of large banks. These banks survived and thrived even as factories closed. Charlotte became a banking center. Winston-Salem and Raleigh followed close behind. Cities across the state also followed the example of the Research Triangle Park (RTP). The RTP is an area between Raleigh and Durham created in 1959 by partnerships between state government, research universities, scientists, and business leaders. They wanted to create an area that would foster economic growth and innovation in technology, research, and science. Once established, the RTP attracted new businesses, like pharmaceutical, technology, and healthcare companies. The RTP model has been copied across the state and around the country. Universities, hospitals, and technology parks all grew throughout the 1990s and 2000s.

Today, North Carolina is one of the economic success stories in the country. Although many areas, particularly the state's southern and northeastern counties, still struggle, new industries continue to move in. And many once stagnant towns continue to reinvent themselves economically.  Smaller towns are using their colleges and historic districts to attract business and tourism. Old tobacco warehouses, mills, and furniture factories have become town centers for shops, restaurants, and apartments. North Carolina is now a national home for technology companies, health care facilities, and craft breweries. As the state’s three traditional industries fell, these new economic engines have emerged to rebuild and help diversify the state's economy. 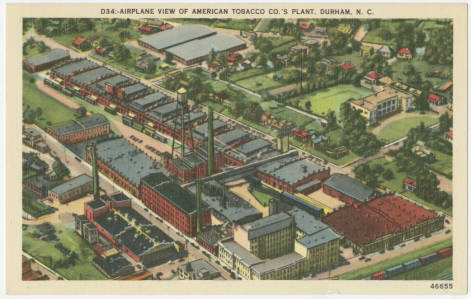 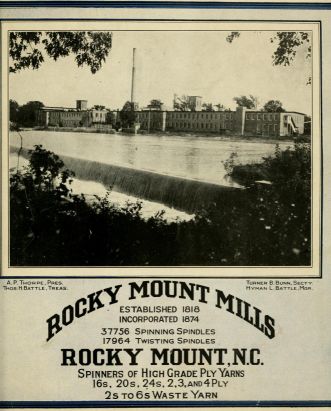 Rocky Mount Mills, Rocky Mount, N.C.
The cotton mill was established in 1818. When they closed in 1996, they were believed to be the oldest operating cotton mill in the South. 320 people lost their jobs. Learn more in this article.

Digital Rocky Mount Mills
Today the mills have been repurposed for residences, businesses, and restaurants.
Visit this digital archive from UNC-Chapel Hill to learn more about the community's history, historical images and documents, and the mill today. 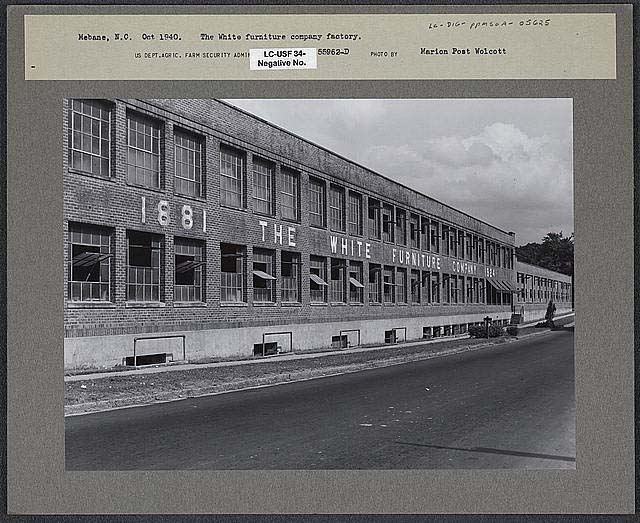 Black and white photograph of the White Furniture Company Factory, in Mebane, N.C., by Marion Post Wolcott, taken October 1940. Today the building has been repurposed as apartments. Image from the Library of Congress Prints & Photographs Online Catalog.