On August 28, 1963, more than 250,000 demonstrators descended upon the nation’s capital to participate in the “March on Washington for Jobs and Freedom.” Not only was it the largest demonstration for human rights in United States history, but it also occasioned a rare display of unity among the various civil rights organizations. The event began with a rally at the Washington Monument featuring several celebrities and musicians. Participants then marched the mile-long National Mall to the Memorial. The three-hour long program at the Lincoln Memorial included speeches from prominent civil rights and religious leaders. The day ended with a meeting between the march leaders and President John F. Kennedy at the White House. — National Archives and Records Administration. The day’s highlight was Martin Luther King’s "I have a Dream" speech, which has been called the greatest speech in American history. 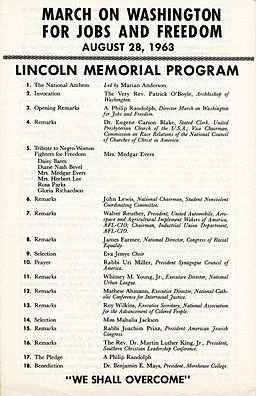 Official Program of the March on Washington. Courtesy of the National Archives. 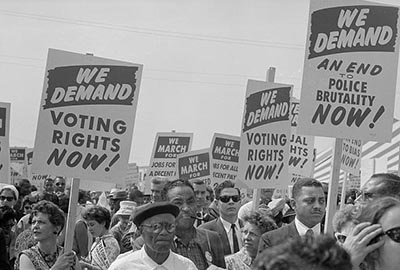 March on Washington protestors, August 28, 1963. From the Library of Congress. 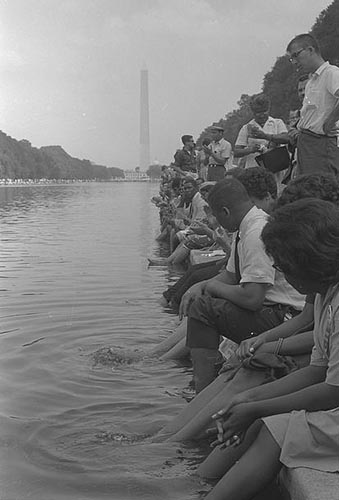 March on Washington demonstrators with their feet in the Reflecting Pool, 1963. From the Library of Congress. 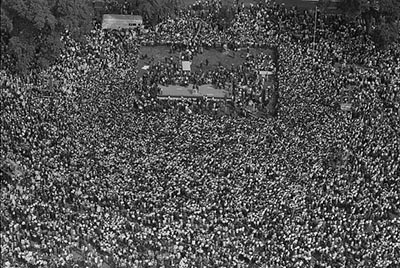 Aerial view of March on Washington, 1963. Courtesy of Library of Congress: Prints and Photography Division