The Tobacco Industry and Winston-Salem

Many industries — such as wagonmaking and furniture early, banking and health care later on — have fueled the growth and vitality of Winston-Salem and Forsyth County.

But from the 1880s to the 1980s, two product categories — tobacco and textiles — have dominated the business, social and cultural scene. Though their significance is fading with changing times, much of what Winston-Salem is today can be traced to these companies or the related businesses they supported.

The tobacco business, simply defined, constitutes growing, warehousing/selling, and manufacturing, all of which have taken place in Forsyth County. Early in Salem’s history, Matthew Miksch did all three. His gardens and “manufactory” can still be seen on Main Street in Old Salem.

By the mid-1800s, many Forsyth County farmers grew at least some tobacco as one of several cash crops. The same was true of many surrounding counties. Thus, when Hamilton Scales brought in supplies to establish his fifty-foot-square, twenty-employee chewing tobacco plant in 1872, tobacco was readily available. When Major T.J. Brown set up the first warehouse for tobacco sales that same year, eventually in a permanent home on Church Street, supply had been organized. Three more warehouses came along by 1884.

It was the promise of a railroad link from Greensboro, though, that drew several additional entrepreneurs to the area.

P.H. Hanes, his brother John W., and Major Brown opened P.H. Hanes & Company to make plug tobacco, also in 1872. His company remained active until 1900, when it was bought out by another entrepreneur at the R.J. Reynolds Tobacco Company. Famously, Hanes tried a new business after that — textiles.

Though it was many years before his company gained its later dominance, Richard Joshua Reynolds grew up in a business much like Matthew Miksch’s, though much larger. From a farm 60 miles north of Winston in southwest Virginia, Reynolds learned about growing, manufacturing and selling finished tobacco products in the family business. In 1875, he left to start his own business in Winston, which eventually became the largest flat-goods plug tobacco maker in the world, and a major player later in cigarettes.

By 1878, Winston had grown to 3,000 residents and twenty-one tobacco businesses, employing over 1,000 people. By 1885, the first producers of smoking tobacco had arrived, along with several cigar makers.

Another significant business was started in 1894, when Brown & Williamson Tobacco opened. Eventually headquartered in Louisville, Kentucky, B&W merged with R.J. Reynolds in 2004.

Of great significance was the first cigarette-making machine, introduced in 1880. Later, funded by four area businessmen, William Cyrus Briggs began to make his own version of a cigarette machine right in Winston, and eventually formed Briggs-Shaffner to also manufacture a companion cigarette packing machine. Cigarettes were slow to catch on with the public, but when they did, the cigarette measurably altered the business.

The late 1890s and early 1900s were a time of innovation as well as a time of consolidation. The American Tobacco Company, and Continental Tobacco, which was under American’s wing, controlled many tobacco firms, including the still-smallish R.J. Reynolds. A number of smaller Winston firms were bought out by Reynolds at American’s direction — or they were too small to compete and closed.

In 1911, however, anti-trust actions by the government forced the break-up of American, and Reynolds became independent once again. Before long — aided by Prince Albert “in a can” and the innovative Camel cigarette — Reynolds’ business boomed. While other companies remained in the fray, R.J. Reynolds dominated the Winston-Salem tobacco business for years to come.

Founder R.J. Reynolds is quoted as saying that he chose Winston because of “the benefit of railroad facilities, and on account of this town being located in the center of the belt in which the finest tobacco in the world is grown.” That location served him and his business well through his death in 1918 and up to modern times.

Though limitations and lower demand have shrunken the business in the 21st century, tobacco has always been a profitable business. Those profits have affected virtually every aspect of life in Winston-Salem, from hospitals and schools to charities and the arts. It’s a legacy that will be remembered. 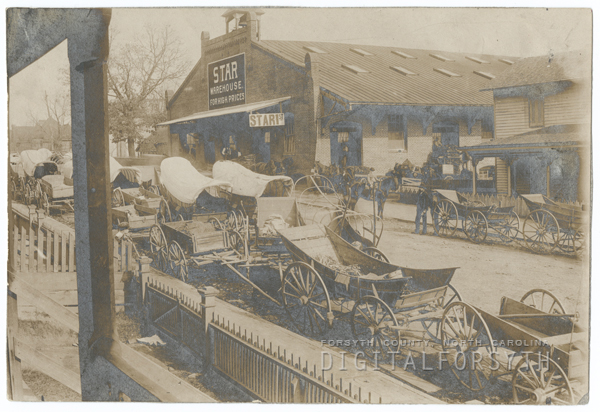