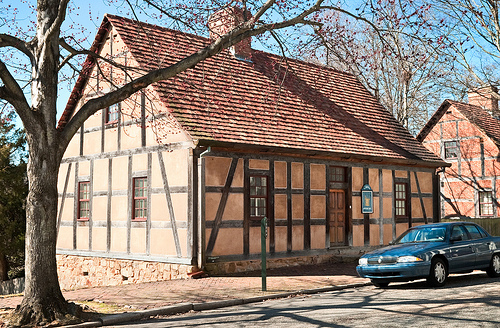 Winston-Salem is heir to a rich heritage produced by the mingling of two distinct historical streams. Known for many years as the Twin City, it was officially formed in 1913 when Salem, founded in 1766 by Moravian settlers, and Winston, established in 1849 as the seat of newly created Forsyth County, merged into a single municipality. From consolidation until the Great Depression, Winston-Salem was the largest and most industrialized city in the state, with an economy dominated by locally developed manufacturing concerns in tobacco and textiles.

A wide array of Winston-Salem's financial, industrial, commercial, and civic enterprises grew out of or benefited from the wealth created by tobacco. Wachovia National Bank opened in 1879, and in the 1880s new railroad connections were built to the north and west. In 1901 and 1902, two brothers who had made fortunes from the sale of their tobacco interests to the American Tobacco trust reinvested their proceeds in textiles; John Wesley Hanes organized the antecedent of Hanes Hosiery Mills, and Pleasant Henderson Hanes founded P. H. Hanes Knitting Company to produce men's underwear. R. J. Reynolds Tobacco Company introduced Camel cigarettes in 1913, and Reynolds soon commanded more than half of the burgeoning national market for cigarettes. The philanthropies of the leading industrial families-the Reynoldses, the Grays, and the Haneses-ornamented the community with new schools, hospitals, churches, and parks.

Of the many businesses that came to Winston-Salem beginning in the mid-twentieth century, by far the most important was the Western Electric Company, which arrived in 1946 and was soon producing a wide range of military and civilian electronics and communications equipment. By the early 1970s it had prompted a host of related businesses to locate in and around Winston-Salem, and its nearly 7,000 employees made it the city's second largest employer after R. J. Reynolds.

The 1980s saw many corporations that had formerly dominated the economy of Winston-Salem disappear or slip out of local control. As early as 1979, the Hanes Corporation, formed in 1965 by the merger of Hanes Hosiery and Hanes Knitting, was bought out by the Sara Lee Corporation. In the trucking industry, federal deregulation created a far more competitive environment that eventually brought the demise of all the major trucking lines based in Winston-Salem. The Western Electric plants, already subsumed into AT&T, closed down as the telephone giant lost its long-distance monopoly in 1984 and was broken up by the U.S. Justice Department. Locally based Piedmont Airlines was bought by USAir in 1987 and lost its separate identity in 1989. By far the greatest blow, however, was the metamorphosis of R. J. Reynolds. Since 1970 the tobacco company had been part of a diversified conglomerate, R. J. Reynolds Industries, which merged in 1987 with the Nabisco Corporation to form RJR Nabisco. In 1990 the last of the huge complex of Reynolds factories in downtown Winston-Salem closed. By the mid-1990s and early 2000s, health care, centering on the mammoth Baptist Hospital/Bowman Gray School of Medicine complex, employed more of the city's workers than any other field. 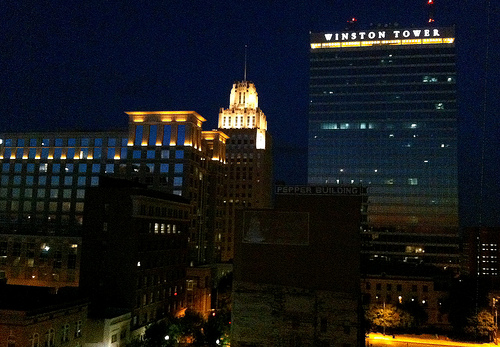 Winston-Salem boasts several important cultural and historical institutions. The Winston-Salem Arts Council, established in 1949 to promote and coordinate activities in the visual and performing arts, became the first permanent organization of its kind in the United States. The heart of Salem, threatened by urban growth and modernization, became the focus of "an adventure in historical preservation" that began in 1950 with the establishment of Old Salem, Inc.; within 15 years much of the early nineteenth-century appearance of the area was restored, and Salem had become one of the leading town museums in the country.

The Moravian-established Salem College and Academy (1772) and Winston-Salem State University (founded in 1892 as Slater Industrial Academy, a school for black students) are two of the city's important educational institutions. Winston-Salem's higher education resources were greatly expanded in 1939, when Wake Forest College (modern Wake Forest University) accepted an endowment from the estate of Bowman Gray, late president of Reynolds Tobacco, to underwrite expansion of its medical school from two years to four years, provided the school moved to Winston-Salem and became affiliated with the North Carolina Baptist Hospital, located in the city since 1923. After World War II, the success of the medical school led to the entire university being moved to Winston-Salem (from Wake County); the first classes were held on the new campus in 1956. In 1963 educational opportunities in Winston-Salem were further enhanced when the General Assembly chose the city as the site for the North Carolina School of the Arts.

With a population of approximately 200,000, Winston-Salem was North Carolina's fifth-largest city in 2005.

Adelaide Fries, Stuart Thurman Wright, and J. Edwin Hendricks, Forsyth: The History of a County on the March (1976).