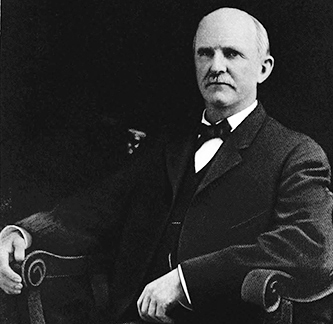 Pleasant Henderson Hanes, manufacturer and civic leader, was born in Fulton, Davie County. A descendant of a Saxon family which spelled its name in various generations as Hoenes, Höhns, Haenes, Haines, Haynes, and Hanes, his earliest American ancestor was Philip Höhns, who came from Zweibrucken, Germany, in 1738 to settle at York, Pa. Höhns's son Marcus Hoenes, a member of the Reformed church, married Anna Elizabeth Kerber, a Lutheran, in 1748 and the two joined the Moravian church in 1752. In 1774, the family purchased 1,060 acres in the North Carolina Moravian settlement of Wachovia and migrated to their Piedmont farm at Friedberg, near Salem. Their son Philip married Johanna Salome Frey and settled near Clemmonsville in future Forsyth County. The line of descent was continued through the marriage of their son Joseph who, by his first wife Catherine Sehner (varied spellings), had two sons, George and Alexander Martin Hanes. Alexander settled at Fulton where he operated a large farm, tannery, and mill. He married Jane March, daughter of Jacob and Margaret Hinkle March. Pleasant Henderson Hanes was the sixth of their eleven children.

During the Civil War, Hanes's older brothers Jacob H. and George A. were killed and Spencer J. was critically wounded. Pleasant Henderson served in the first two years of the war as first lieutenant in the Home Guard, but volunteered in 1863 to join the Confederate Cavalry at Richmond, enlisting in Company E, Sixteenth North Carolina Battalion. He soon earned a position as special courier to General Robert E. Lee, with whom he served until the surrender of Appomattox.

The Fulton community schools offered the only formal education Hanes received, but his military experience and help in managing the family farm provided him the skills and motivation to expand his activities. In 1870, he became a tobacco salesman for Dulin and Booe, tobacco manufacturers in Mocksville, and traveled across much of the South. Acknowledging his initiative and shrewdness as a salesman, competing agents dubbed him "Early Bird" Hanes because of his reputation for rising early and making sales to their clients while they were still having breakfast. In 1871, he became a partner in Dulin and Booe which moved to Winston, a growing town that was rapidly becoming a world center of bright leaf tobacco manufacturing.

In 1872, Hanes organized P. H. Hanes and Company to manufacture tobacco. His partners were his younger brother, John Wesley Hanes, and a friend from Davie County, Major Thomas Jethro Brown. The first factory was a two-story frame building measuring forty by sixty feet. In its second year the factory burned, and Brown retired from the firm to be replaced by another brother Benjamin F. Hanes. A few years later Benjamin withdrew, leaving the company in the hands of Pleasant Henderson and John Wesley Hanes. Together they built a thriving business in the manufacture and marketing of chewing tobacco. By 1900, the business had a capacity of 5 million pounds annually and was reputed to be the third largest manufactory of flat-plug tobacco in the South. Under pressure from James B. Duke's American Tobacco trust, the Hanes brothers sold their company in 1900 to Richard Joshua Reynolds, whose burgeoning tobacco company was at the time an independent participant in the trust.

At ages fifty-five and fifty respectively, the Hanes brothers could have retired on the income from the sale of the company, but instead they entered the textile business. John Wesley opened the Shamrock Hosiery Mills. Pleasant Henderson joined with his sons Pleasant Huber and William Marvin to set up the P. H. Hanes Knitting Company in 1902 to manufacture knitted underwear for men and boys. In addition to directing that company successfully until his death, he was also vice-president of the Washington Mills of Fries, Va., and of the Security Life and Annuity Company of Greensboro.

Hanes maintained a farm west of Winston-Salem which could serve as a model for Piedmont agriculture. He was one of the first to introduce tractors and the modern methods of scientific agriculture to the area and to demonstrate their value. He invested heavily in his Holstein stock and dairy farm to improve the breeding of stock in the Piedmont.

As a civic leader in the growing community of Winston-Salem, he served several terms on the Board of Aldermen, was a member of the committee that built the city's first waterworks system, helped found the city graded school system, donated fifty acres for the P. H. Hanes Athletic Park to serve the school children, and was chairman of the Board of County Commissioners. At the state level, he was one of the strongest advocates of highway improvement. He was the first president of the North Carolina Good Roads Association, organized in Raleigh in 1902, and was appointed by Governor Charles B. Aycock to represent the state at National Good Roads Congress meetings in Buffalo, Philadelphia, and St. Louis.

A devout Methodist, Hanes was a steward of Centenary Methodist Episcopal Church in Winston-Salem. He was also a trustee of Trinity College (now Duke University), a Mason, a Knight of Pythias, and an officer in the North Carolina division of the United Confederate Veterans. In politics he was a Democrat.