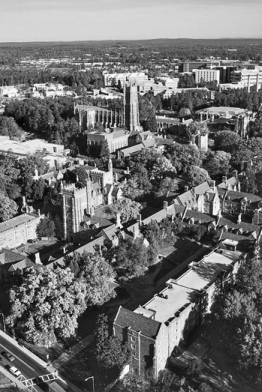 In December 1924, James B. Duke provided the money for a new research university to be created in connection with Trinity College in Durham. The idea and plan, however, came from the president of Trinity, William P. Few, who served for 15 years as Duke University's first president. Eager to see North Carolina and the South begin to catch up with other sections of the nation in the realm of higher education, Few had high ambitions for the university and, before he died in 1940, had the satisfaction of seeing some of them achieved. Recognizing the opportunity to establish a new, unique name for the institution, Few proposed that it be called Duke University, and James B. Duke agreed on condition that it be considered a memorial to his father and family.

Through the Duke Endowment, James B. Duke provided not only long-term support for the new university but also approximately $19 million to construct an elaborate and extensive physical plant. The plan called for constructing 11 new buildings in the classical or Georgian style of architecture, both on the existing Trinity campus and on a new site a mile and a half away. As that construction proceeded from 1925 through 1927, the university operated in cramped quarters on the old campus. In September 1930-when Tudor Gothic buildings made of native stone from a quarry near Hillsborough were completed on the new West Campus-the old or East Campus became the site of the Woman's College of Duke University. Some 5,000 acres of adjoining land (later expanded to around 8,000 acres) became the Duke Forest, also the gift of James B. Duke.

While both Duke Law School and the School of Religion (later the Divinity School) had antecedents in Trinity College, the School of Medicine and the hospital, which opened in 1930, did not. Under the leadership of Dean Wilburt C. Davison, the medical center, which also included a School of Nursing and other specialized training programs, quickly gained national recognition and proved to be of great service to the state and region. Duke's medical school was for a period the only four-year medical program in North Carolina. Schools of Engineering, Forestry, and, much later, Business were gradually established. In 1972 the Woman's College, as a separate administrative entity, was abolished, and both men and women began to be housed on East and West Campus.

Despite being a nondenominational university with no religious tests for either faculty or students, Duke retains a long relationship with the Methodist Church. This relationship is reflected in the university's motto, chosen by school president Braxton Craven in 1859, Eruditio et Religio (Erudition and Religion). The school's famous mascot, the Blue Devil, has no religious connotations, however. The student body selected the name in the 1920s in recognition of a then well-known French military unit, the Chasseurs Alpins. Nicknamed "les Diables Bleus" for their distinctive blue uniform with flowing capes and berets, the French Blue Devils toured the United States during World War I to help raise money for the war effort.

In the early 2000s, under the leadership of its ninth president, Richard H. Brodhead, Duke University enrolled approximately 6,300 undergraduate and 4,500 graduate students representing almost every state and about 75 foreign countries. The curriculum has grown to include studies in fields as diverse as biomedical engineering, public policy, microelectronics, and black church affairs. The Medical Center, through its educational, research, and patient care missions, is a regional and national leader in health care and biomedicine. Duke University consistently ranks in the top ten in academic excellence among the nation's universities, both private and public.