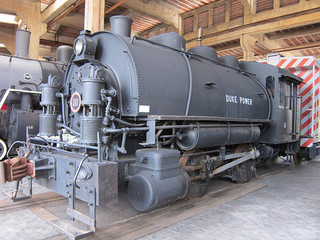 The Duke Power Company, since 1997 a subsidiary of Duke Energy Corporation, is an electric utility company with headquarters in Charlotte and a service area in the Piedmont region of North Carolina and South Carolina. The company was the brainchild of James B. Duke and his older brother Benjamin N. Duke. Heavily involved in both tobacco and textile manufacturing, the Duke brothers began to explore the possibilities of hydroelectric power as early as the 1890s. Meanwhile, in 1900 Walker Gill Wylie and his brother Robert H. Wylie established the Catawba Power Company to supply electricity to textile mills near Rock Hill, S.C. The power station they completed on the Catawba River four years later was subsequently purchased by the Dukes and became the first station in the Duke Power system. In 1905 the Duke brothers launched the Southern Power Company (which in 1924 became the Duke Power Company) and began a long, close association with William States Lee, a brilliant electrical engineer. Lee played a key role in building the company and its vast network of dams and power stations.

In the company's early history, the Dukes, Lee, Walker Gill Wylie, and their associates had to work hard to build a market for electric power. As part of this process, the Dukes invested heavily in a number of textile mills in both Carolinas. Built prior to World War I, the Piedmont & Northern Electric Railway Company, an electric interurban line for passengers and freight, also played a large role in the economic development of the area between Charlotte and the cities of piedmont South Carolina.

Aiming from the first at a comprehensive development of the waterpower of a region rather than the random development of isolated sites, the Duke brothers, Lee, and their associates pioneered in developing power technology, in conserving natural resources, and in connecting their own vast power grid with a number of smaller networks (even prior to World War I)-playing an important role in the creation of what has been called the largest "system of systems" attempted in the world up to that time. Coal-burning steam plants such as Southern Power Company's Greenville, S.C., and Greensboro stations, both constructed in 1911, were originally used as standby auxiliaries to the hydroelectric stations. Floods and droughts, such as the devastating 1916 flood of the Catawba River and the record-breaking summer drought of 1925, highlighted the limitations of hydroelectric generation. For this reason, shortly before his death in October 1925, James B. Duke authorized the construction of the Buck Steam Station, the first large-scale central steam station in the south. The station was built in record time on the Yadkin River near Salisbury.

Through the final decades of the twentieth century, the company diversified and grew into a Fortune 500 corporate giant. The 1997 merger of Duke Power and PanEnergy Corporation-the first between an electric utility and a gas pipeline company-led to the creation of Duke Energy Corporation, of which Duke Power became a wholly owned subsidiary. Other Duke Energy companies include Duke Energy Merchants, Duke Energy Gas Transmission, DukeNet Communications, Crescent Resources, and Duke/Fluor Daniel. In March 1999 Duke Energy purchased Union Pacific Resources Group, solidifying the company as one of the largest natural gas gatherers and distributors in the world. In 2006 Duke Energy employed more than 23,000 people worldwide.