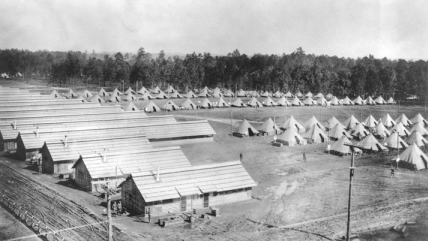 World War I ranks as one of the deadliest wars in American military history, and North Carolina shared in the devastating loss of human life. In only five months of fighting on the western front, 50,554 Americans were either killed in action or died from wounds and 198,059 men were injured. Another 69,540 men died from disease or other causes in France or the United States. North Carolina sent a total of 86,457 men to fight in France. Of that number, 629 were killed in combat, 204 later died of wounds, 3,655 were injured but recovered, and 1,542 died of disease. Some North Carolinians were singled out by the U.S. government for special achievements during the war. Robert L. Blackwell, of Person County, who served in the Thirtieth "Old Hickory" Division, was the only North Carolinian to received the Medal of Honor, which was awarded posthumously. Another 200 soldiers from North Carolina received the Distinguished Service Cross, and 12 men were awarded the Distinguished Service Medal. All of North Carolina's World War I veterans were offered a service medal by the state.