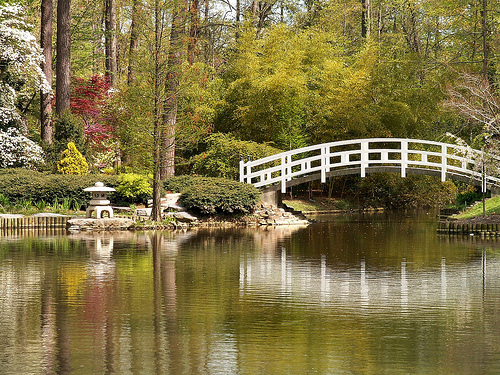 The Sarah P. Duke Gardens occupy 55 acres close to the center of Duke University's West Campus. They were begun in 1934 when Frederic M. Hanes, an avid gardener and iris lover as well as important figure in Duke's medical center, persuaded Benjamin N. Duke's widow, Sarah P. Duke, to pay $20,000 for a garden featuring irises. Hanes then hired a well-known landscape architect, Ellen B. Shipman, to design a terraced garden, the gift of Mary Duke Biddle as a memorial to her mother, Sarah P. Duke. Opened to the public in 1939, this portion of Duke Gardens, with a rock garden on the opposite hillside, is the oldest and best-known feature. In subsequent years the Hugo L. Blomquist Garden of Native Plants-containing several thousand specimens indigenous to the Southeast-the Doris Duke Center Garden, and the extensive Culberson Asiatic Arboretum, dedicated to plants of eastern Asia, were developed. The Sarah P. Duke Gardens are open to the public every day of the year without charge and each year attract over 300,000 visitors.

what day was this founded and

You can find more detailed information about the Gardens' history here: https://gardens.duke.edu/about/history.

I hope this helps. Please feel free to respond to this post with more questions or comments.