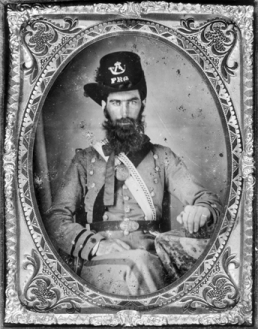 Civil War battles were fought at numerous locations throughout North Carolina, the majority of them in the eastern half of the state. In the western Mountain region, where pro-Union sentiment was strong, the violence tended to be more guerrilla in nature rather than confrontations between opposing armies. During the war, North Carolina suffered a greater number of battle casualties than any other Confederate state. According to available records and estimates, the number of North Carolina soldiers put into the field for state and Confederate service, embracing all classes and categories, was 133,905 men. Because of the incompleteness of the rolls, many historians believe this figure might actually be too low-despite the fact that the 1860 census showed that North Carolina had a white population of 629,932, with only about 115,000 men of voting age. These statistics illustrate how readily the available manpower of the state turned out to serve the Confederacy.

Soldiers from North Carolina represented one-fifth to one-sixth of the troops put into the field by all 11 Confederate states combined. The price paid by North Carolina was similarly disproportionate: 677 officers and 13,845 enlisted men were killed in battle, and 330 officers and 4,821 enlisted men died of wounds, totaling 19,673 battle deaths. This represents 26 percent of the 74,524-man total battle loss suffered by all Confederate forces in the war (South Carolina had the second highest total with 12,922 battle deaths). Death from disease also claimed 541 officers and 20,061 enlisted men

In addition, 3,156 white and 5,035 black North Carolinians served in the Union army. Although blacks were not actively recruited into Confederate service for the state, some free blacks were known to have enlisted and served in regular North Carolina regiments.

Additional resources for learning about the causes and history of the Civil War: