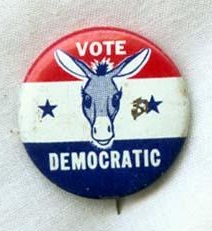 The Democratic Party has wielded great political power in North Carolina. The state's politics have largely been defined by periods of unchallenged, one-party Democratic rule interrupted by other successful movements that have competed against and helped shape Democratic policies. Democrats trace their roots to the Democratic-Republican Party, or Jeffersonian Republican Party, of the early 1790s. Jeffersonian Republicans believed in a strict interpretation of the U.S. Constitution and the advancement of state rights over a powerful national government. North Carolina was strongly Republican in both national and state politics throughout the late eighteenth and early nineteenth centuries.

Andrew Jackson's defeat in the presidential campaign of 1824 resulted in the dissolution of the Jeffersonian Republican Party and the emergence of the modern Democratic Party, which formed with Jackson as its national leader. Four years later North Carolina's eastern politicians, who had dominated state government since 1776, and leaders from the west and sound regions all supported Jackson over John Quincy Adams. But after his election in 1828, Jackson's clear opposition to internal improvements, favored by the North Carolinians who had voted for him, caused a split in the state Democratic Party.

A new national coalition, the Whig Party, was formed around 1832 to oppose the policies of Jackson and the Democrats. Formally organized in North Carolina in 1835, the Whigs quickly attracted considerable support statewide. The party adopted the agenda of Archibald D. Murphey, a forward-looking state senator from Orange County who championed constitutional reform, a system of public education, and internal improvements-issues immensely popular in the west and parts of the east but opposed by the Democrats. The 1835 amendments to the North Carolina Constitution, which changed the state's election process, put further pressure on Democrats to become more "democratic."

When the national Whig Party collapsed in the early 1850s, around the time the Republican Party formed, the balance of power in North Carolina again swung to the Democratic Party. After the Civil War, the southern Democratic wing (sometimes called the Conservative Party) became the primary political alternative to Republican Reconstruction policies. In North Carolina, Democratic leaders branded Republicans as callous outsiders who represented northern and black interests at the expense of the native-born white population. The Ku Klux Klan served as an unofficial but effective tool of political terrorism for these conservative Democrats, often preventing Republicans of both races from voting. By 1876, when Zebulon B. Vance was reelected governor more than a decade after his previous term had ended, the Conservatives had clearly emerged as the state's dominant political force and reclaimed leadership of the Democratic Party.

The success of the Populist Party among small farmers led to a Populist-Republican "Fusion" that was able to win control of both houses of the legislature in 1894 and elect a Republican governor in 1896. However, intense Democratic campaigning based on a doctrine of white supremacy succeeded in returning the Democrats to power in 1898. One of their first actions back in office was to amend the state constitution to effectively disfranchise black voters through a poll tax, literacy test, and grandfather clause. Disfranchisement gave Democrats firm control of state politics, a one-party domination not seriously challenged until the 1960s and 1970s. Democratic "gangs" such as the Red Shirts and the Ku Klux Klan controlled virtually all of the state by unchallenged force.

The ideology of the North Carolina Democratic Party during the first half of the twentieth century was a mix of economic progressivism and conservative retrenchment, particularly on issues of race. The 1900 election of Governor Charles B. Aycock, who ran on a strong public education platform, embodied the two sides of the emerging Democratic agenda: Aycock was progressive in his desire for markedly better education for white citizens while remaining a steadfast advocate of white supremacy and less-than-equal educational opportunities for African Americans. North Carolina Democrats were less ambiguous when it came to economic goals. In the 1920s Governor Cameron Morrison's policies dramatically increased the quality of state roads, leading to improved economic development. Governor O. Max Gardner instituted programs to attract industry to the state, pushed a worker's compensation 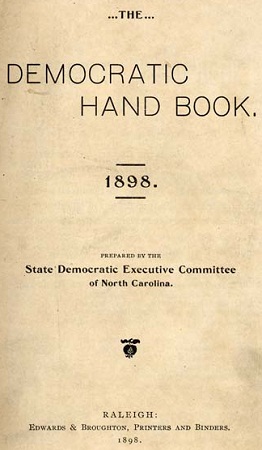 The Democratic senatorial primary campaign of 1950 illustrated the ongoing conflict over racial politics and commitment to economic and social progress within the party. In 1949 Governor Kerr Scott, a Democrat, had appointed Frank Porter Graham, president of the University of North Carolina and a noted liberal, to fill the term of the recently deceased Senator J. Melville Broughton. In the subsequent Democratic primaries, his opponent was conservative Willis Smith, who accused Graham of supporting everything from integration to communism. Racial politics inflamed the electorate, and Smith won the Democratic seat.

But as the conservative wing of the party continued to dominate state affairs, the national Democratic Party was growing more liberal. The election of John F. Kennedy and his running mate Lyndon B. Johnson, as well as national party support of civil rights measures, social welfare programs, and a variety of liberal social causes, resulted in dissent among southern Democrats. By the late 1960s, the Republican Party was becoming a competitive force in North Carolina politics, culminating in the state's support of Richard M. Nixon in the 1968 presidential election and the 1972 election of James E. Holshouser Jr. and Jesse Helms, respectively, as the first Republican governor and the first Republican U.S. senator from North Carolina in the twentieth century. As the national Democratic Party continued to court black voters and embrace a more progressive social agenda, conservative Democrats became increasingly willing to vote for Republicans who shared their views, and many ultimately changed their political affiliation.

By the end of the twentieth century, the state's one-party political system, which had been so influential in shaping North Carolina's history since the Civil War, had vanished. The Republican Party had significantly boosted its numbers by absorbing the traditionalism abandoned by the Democratic Party's progressive wing, leaving state Democrats struggling to redefine themselves in this new ideological climate. Most Democrats refashioned themselves as moderates, adopting liberal positions on social issues such as racial equality and women's rights to appease the party's new base while continuing their traditional promotion of the state's economic development, even as businesses increasingly turned to the Republican Party. This balancing act proved crucial to the Democrats' survival, for although it seemed that North Carolinians preferred Republicans as their U.S. representatives, senators, and presidents, in 2005 Democrats still outnumbered Republicans in the General Assembly and occupied most of the top state offices, including the governorship. Furthermore, about 2.5 million North Carolinians were registered as Democrats, whereas Republicans, despite their gains, claimed only 1.8 million.