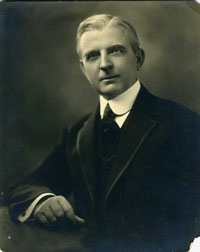 In a public career spanning fifty years, Cameron Morrison (1869-1953) served as United States Senator and Representative as well as governor, but is best remembered for highway and school improvements financed by bond issues, initiatives which earned North Carolina a reputation as the most progressive Southern state in the 1920s. The “Good Roads Governor” was born on October 5, 1869, in Richmond County to Confederate veteran and local officeholder Daniel Morrison and the former Martha Cameron. Educated in schools in Ellerbe Springs and Rockingham, young Morrison did not attend college but in 1892 studied law with Judge Robert P. Dick of Greensboro. The same year he passed the bar and returned to Rockingham to practice. In 1905, the year he moved his practice to Charlotte, Morrison married Lottie May Tomlinson of Durham; of their four children, only their daughter Angelia survived infancy. Lottie Morrison died in 1919, on the eve of his gubernatorial bid. While governor, on April 2, 1924, Morrison married Sarah Ecker Watts, widow of Durham financier George Washington Watts.

Morrison switched from the Republican to Democratic Party in 1891 and expended much effort opposing what he viewed as abuses of the political system by Republicans and their allies in the 1890s. As a leader of the “Red Shirts” in his home county he promoted white supremacy with tactics that included harassment of and threats of violence against blacks. Morrison, who served as mayor of Rockingham, was defeated in a bid for the state senate in 1896 but was elected to a single term in 1900. With the support of the political machine of U.S. Senator Furnifold Simmons Morrison won the Democratic nomination for governor in 1920, besting Lieutenant Governor O. Max Gardner and former congressman Robert N. Page in a close and hard-fought contest. In the fall he defeated Republican John J. Parker by a wide margin. 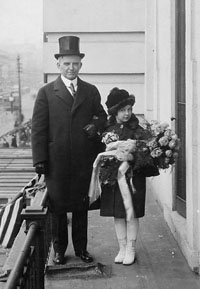 Morrison devoted almost half of his inaugural address to highways, endorsing practically all of the goals of the Good Roads movement. With his backing and grassroots organization, the 1921 legislature enacted an act providing for a $50 million bond issue (followed in 1923 by an additional $15 million). To be financed by receipts from automobile and gasoline taxes, the bonds funded construction of 5,500 miles of hard-surface roads. The swift action and fiscal daring shocked Morrison’s conservative backers, who warned that the plan would bankrupt the state. His administration ended with a deficit of $9 million that was repaid during his successor’s term.

The legislature, on the governor’s recommendation, funded $20 million in bonds for improvements for higher education and the state’s charitable institutions. During Morrison’s administration the state assumed operation of the orthopedic hospital at Gastonia and elevated the North Carolina College for Negroes in Durham (now N.C. Central University) to four-year status. Despite his earlier history, Morrison sought to improve race relations and all but ended lynching in the state. A Presbyterian, Morrison was a traditionalist on social issues, endorsing prohibition and opposing the teaching of evolution in the public schools. His principal defeat during his term came at the hands of voters in 1924, when they rejected his proposal for an $8 million bond issue to finance state port terminal facilities.

In 1925 Morrison returned to Charlotte and his “Morrocroft” estate, then under construction. In 1930 Governor O. Max Gardner appointed him to fill an unexpired U.S. Senate term on the death of Lee S. Overman. Two years later, Robert R. Reynolds defeated Morrison in his bid for a full term in a campaign where the political novice ridiculed the veteran for his wealth acquired through marriage. In 1942 Morrison was elected to the U.S. House but two years later was defeated by Clyde R. Hoey in another bid for the Senate. Morrison died in Quebec on August 20, 1953, and is buried in Elmwood Cemetery in Charlotte.