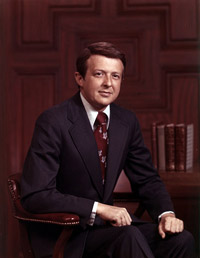 The first Republican elected governor of North Carolina in the twentieth century, James E. Holshouser, Jr. (1934- ) extended rural health care, expanded kindergarten and community college programs, acquired park lands, reformed highway fund allocation, and instituted an efficiency study of state government. A native of Boone, Holshouser was born on October 8, 1934, to James E. Holshouser, an attorney and district court judge, and the former Virginia Dayvault. Up to the seventh grade Holshouser suffered from severe asthma; in high school a chronic kidney infection kept him from taking part in athletic activities. He served as sports editor for the student newspaper at Davidson College where he graduated in 1956. While in law school at the University of North Carolina he developed his first serious interest in politics. In 1961 Holshouser, a Presbyterian, married Patricia Hollingsworth; they would have one daughter.

On completion of his studies at Chapel Hill in 1960 Holshouser returned to Watauga County to practice law. In 1962 he was elected to the first of four terms in the state House. He served as that body’s minority leader in the 1965 session and chaired the state Republican Party from 1966 to 1972. In 1968 he directed Richard M. Nixon’s presidential campaign in the Tar Heel State.

In the fiercely waged 1972 Republican race for governor, the moderate and shy Holshouser met conservative and flamboyant James C. Gardner, who had been the nominee four years earlier. In the first primary Gardner led by a slim margin over Holshouser and two minor candidates; Holshouser defeated Gardner in the second primary by 1800 votes. In the fall Holshouser defeated Democratic nominee Hargrove (“Skipper”) Bowles. His victory was aided considerably by Richard M. Nixon’s 600,000-vote margin over Democrat George McGovern in North Carolina.

Holshouser, at thirty-eight the youngest Chief Executive in the twentieth century, faced Democratic majorities in both houses of the legislature and state employees still adjusting to reorganization. As his first executive order, Holshouser established the Governor’s Efficiency Study Commission chaired by Archie K. Davis. After months of study that board recommended 700 cost-saving changes. These included measures such as five-year license plates, use of compact cars by state agencies, and centralized printing services. At the close of his term Holshouser estimated that the changes saved $80 million annually. New initiatives included an ombudsman and “People’s Days” to permit direct contact with the governor.

The kindergarten program that extended to 3,427 students in 1973 had expanded to cover the entire state by 1977. Area Health Education Centers and Rural Health Centers received the governor’s backing. Holshouser took measures to deal with the energy crisis by lowering speed limits and the heat in state buildings. The Board of Transportation instituted a seven-year program for highway expansion and a more equitable formula system for allocation of secondary road funds. Ten new state parks were established, more than doubling the acreage of state park land. Moves were taken to protect the New River, Jockeys Ridge, and the Cape Lookout National Seashore. The Coastal Area Management Act was enacted in 1974.

Holshouser presided over events related to the nation’s bicentennial in 1976. In that year he served as southern chairman of President Gerald Ford’s campaign. After Ford’s defeat in the North Carolina primary by Ronald Reagan, Holshouser was denied a seat in the state delegation to the Republican convention by party conservatives.

At the end of his term as governor Holshouser split his time between law practices in Boone and Southern Pines. In 1978 he moved to the Moore County town and since 1979 he has served on the University of North Carolina Board of Governors.

National Governors Association. 1981. The Education of a New Governor.

Listen to an interview from Documenting the American South at the University of North Carolina at Chapel Hill.