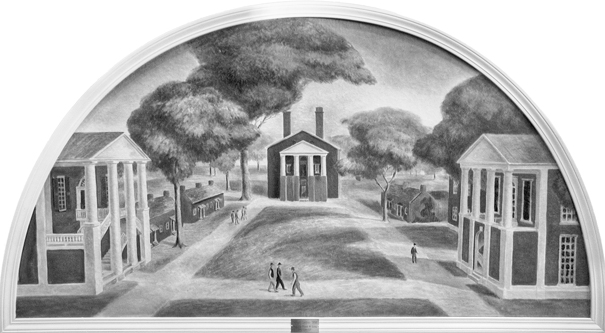 Davidson College, located in the town of Davidson, opened its doors in 1837 under the auspices of the Concord (western North Carolina) and Bethel (upcountry South Carolina) Presbyteries as a manual training school. Davidson was the namesake of Gen. William Lee Davidson, a Pennsylvania native who was killed at the Revolutionary War battle of Cowan's Ford near Charlotte. His son, also named William, provided the 469 acres upon which the college now stands, as well as a number of substantive monetary gifts. Also integral to Davidson's founding were Robert Hall Morrison of Charlotte, French-born Stephen Frontis (who later taught languages at the college), and P. J. Sparrow of Salisbury, who was instrumental in securing $30,000 for the college's inception.

Davidson's buildings, constructed under the guidance of Samuel Lemly of Salisbury, were situated in a quadrangle pattern: Elm Row, Eumeanean Society Hall, Oak Row, "Old Chapel" (later Shearer Biblical Hall), and Philanthropic Society Hall. Robert Morrison was the college's first president, and the first class consisted of 65 students studying under 3 faculty members. In 1841, within five years after Davidson's founding, the faculty substituted a classical course for its manual one. The college struggled until 1856, when, as a stipulation of the will of Salisbury cotton planter Maxwell Chambers, it received $250,000. The gift made Davidson the most heavily endowed institution south of Princeton. In 1857 the $90,000 Chambers Building, designed by Andrew Jackson Davis of New York, was erected; Chambers also endowed chairs in science and philosophy.

As a result of Chambers's gifts, Davidson's future grew secure. The institution was one of two men's schools in North Carolina to remain open during the Civil War, in part because of efforts of president John Lycan Kirkpatrick to integrate a preparatory course into the curriculum; still, when the conflict ended, Davidson enrolled only 24 students. Academic progress continued, however. Future U.S. president Woodrow Wilson attended Davidson in 1873 before transferring to Princeton. In 1896 future school president Henry Louis Smith and some of his students produced some of the nation's earliest X-ray images. In 1903 Wilson P. Mills received a Rhodes scholarship, the first in Davidson history. During the 1920s the college expanded its curriculum to include both classical and modern languages as well as Bachelor of Science degrees. In 1921 the original Chambers Building burned and was replaced, thanks in part to the Rockefellers, by a $600,000 edifice eight years later. In 1923 Phi Beta Kappa installed its Gamma of North Carolina Chapter at Davidson, and business and music classes were added to the curriculum.

The 1960s witnessed the introduction of the flexible Blue Sky Curriculum, and in 1972 Davidson began admitting women. The 1980s saw the construction of six residence facilities and a new sports complex, and the Visual Arts Building was added in 1993.

Davidson's mascot is the Wildcat; the school seal, with its motto, Alenda Lux Ubi Orta Libertas (Let Learning Be Cherished Where Liberty Has Arisen), was designed by Peter Stuart Ney, alleged by some to have been Napoleonic general Marshal Ney. Davidson's alumni, in addition to President Wilson, include former U.S. secretary of state and Rhodes scholar Dean Rusk and North Carolina governors Robert Brodnax Glenn, James E. Holshouser, and James G. Martin. Robert "Bobby" Frederick Vagt, a 1969 Davidson graduate and Duke Divinity School alumnus who built his career in the energy industry, became the school's president in 1997. In the early 2000s Davidson had a student body of approximately 1,600, served by 156 full-time faculty members.