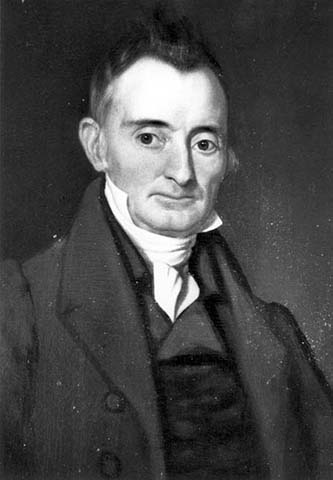 Maxwell Chambers, planter and manufacturer, was born in Salisbury, the son of Joseph and Mary Campbell Chambers. His father died in 1784, and Maxwell was placed by the court under the protection of kinsmen Maxwell Chambers the elder and William Nesbit. He received his education in Salisbury and while yet a young man went to Charleston, S.C., in company with an uncle, Hugh Campbell. There he is supposed to have laid the basis of his fortune, which by the time of his death amounted to a half million dollars, a considerable amount for anyone living in Piedmont North Carolina between 1820 and 1850.

Following his return to Salisbury in about 1820, Chambers lived with his widowed half sister, Rebecca Nesbit Troy, in the former Salisbury Academy building (now the Josephus Hall House) on the corner of Bank and Jackson Streets, which she had acquired in 1825 when the academy closed. He never entered into regular business again, but set himself up as a one-man loan company. The many mortgages and deeds he executed show that he loaned money to prominent citizens in the county, often acquiring their homes or plantations when they failed to pay off their loans. It was said that he "never mixed business and charity together"; he "would give and take the last cent due in a trade, and when he chose to give, he gave liberally."

Three of his many homes he placed at the disposal of the Reverend Archibald Baker, pastor of the Presbyterian church in Salisbury. One of these homes, now the Rowan Museum, was called for years the Maxwell Chambers House. It was through Baker that Chambers was drawn to the support of Davidson College, to which institution he left a legacy of about $250,000, making it for a short time the wealthiest private college in the South. Owing to the limitations of the school's charter, however, the college could not receive the whole amount, and a considerable sum went to the Chambers heirs. With what funds the college did receive, Chambers Hall was erected, dwarfing in size and magnificence anything even at Princeton itself. It burned in 1921, and another Chambers Hall was erected on the site in 1929.

Chambers, whose name is closely identified with Salisbury, never actively sought public life either at the polls or in civic endeavors. He was, however, called upon by his fellow citizens to serve as a director in the Salisbury branch of the state bank in 1824, as one of the town's assessors in 1830, as a member of the building committee for Davidson College in 1835, and as a member of the town board in 1849.

In 1848, Chambers purchased for thirty thousand dollars the Salisbury Cotton Factory, which had come upon hard times since its opening in 1842. He renamed it the Rowan Factory but was no more successful in operating Salisbury's first textile mill than his predecessors had been; he sold it to his kinsmen, J. S. and P. B. Chambers. The mill later passed into the hands of Davidson College and in 1861 was sold to the Confederate government for use as a prison for Confederate felons and Federal prisoners of war.

The tradition that Chambers made his fortune in Charleston is seriously questioned. A thorough search of the Charleston census records, tax lists, city directories, and newspapers from 1800 to 1820 fails to reveal his name. If he did, indeed, operate a business there, he must have done so under an assumed name.

There is some indication that Chambers actually made his money by buying and selling enslaved people. A kinsman was a slave dealer, and Chambers's great-nephew states that Maxwell Chambers used his brother Joseph as a front man in the slave trade in Alexandria, Va., and by so doing kept himself well in the background. In light of this information, it is significant that J. J. Bruner, editor of the local newspaper and elder in the Presbyterian church, failed to carry Chambers's obituary, as he customarily did when a prominent citizen died. His only remarks were confined to a notice of Chambers's death and of the fact that he had left a large legacy (consisting of two city blocks and other sources of income) to the Presbyterian church in Salisbury and a large amount to Davidson College. "He himself was not a member of any church," Bruner wrote, "but he has, however, left a name which will long be remembered by the church here."

In 1842, Chambers was in correspondence with a free black person in Fayetteville who had just returned from Liberia, Africa. This freedman was interested in removing other freed, formerly enslaved people to Ohio and asked Chambers's help. The tone of the letter indicates both previous correspondence on the subject and Chambers's interest in the black man's welfare. A year before he died, Chambers manumitted eighteen or twenty of his enslaved people, giving them transportation to Oberlin, Ohio, and funds with which to begin life anew. At his death, he freed forty-eight enslaved people with the same provisions for their safe journey to Ohio under his overseer, Moses Rimer.

Chambers was married to Catherine B. Troy, daughter of Matthew Troy the elder and the sister of Matthew Troy the younger. Although an attachment had long existed between the two, they were not married until 1836, when both were somewhat advanced in life; they had no issue. They moved into the Nesbit home on Innes Street, on the site of the present Salisbury Post building, and there they ended their days. "Aunt Kitty," as Mrs. Chambers was affectionately called, died at the age of sixty-five in 1852. Both were buried beneath the Lecture Room of the Presbyterian church in Salisbury, with earlier members of their families. By his will, Chambers provided funds and materials for the erection of the brick building over the graves.

Rowan County records (Salisbury), for Deed Books in the Register of Deeds Office and Will Book K in the Clerk's Office.