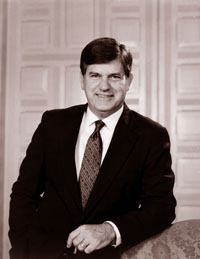 The election of Republican James G. Martin (1935- ) to two consecutive four-year terms as governor reflected the fact that North Carolina was no longer a one-party state. A political moderate and the first Ph.D. to hold the office, Martin pursued initiatives with respect to economic development, education, transportation, and the environment but met blunt resistance to his programs in the General Assembly, dominated by Democrats. Born in Savannah, Georgia, on December 11, 1935, James Grubbs Martin was the son of Arthur Morrison Martin, a Presbyterian minister, and the former Mary Julia Grubbs. Raised in Winnsboro, South Carolina, young Martin attended public schools, where he took part in sports and played the tuba (as an adult Martin composed music). He attended Davidson College, graduating in 1957, and earned a doctorate in chemistry from Princeton University in 1960. In 1957 he married Dorothy Ann McAulay; they would have three children.

In 1960 Martin joined the faculty of his alma mater and taught chemistry at Davidson until 1972. From 1966 to 1972 he served on the Mecklenburg County Board of Commissioners, for three years as chair. In 1972 voters of the Ninth District elected Martin, who lived at Lake Norman, to the U.S. House. In six terms in Congress Martin chaired the House Republican Research Committee and the Republican Task Force on Health and Environment. Also a member of the Ways and Means Committee, Martin was recognized for his expertise on food additives and toxic waste. In the Republican primary for governor in 1984, Martin easily defeated Ruby Hooper and in the fall defeated the Democratic nominee, Attorney General Rufus L. Edmisten. In 1988 Martin defeated his Democratic opponent, Lieutenant Governor Robert B. Jordan III. James C. Gardner became the first Republican elected lieutenant governor in the twentieth century in the same election.

As a candidate Martin, an advocate of supply-side economics, campaigned on a pro-business platform and as governor, benefiting from the prosperity of the mid-1980s, Martin boosted industrial development by reducing business taxes and recruiting out-of-state companies. In proposing his Strategic Highway Corridor plan in 1987, whereby a four-lane highway would pass within 96% of the state’s residents, Martin stressed economic benefits. He forwarded the concept of a global air cargo industrial complex and held to his promise to see I-40 completed. In the Coastal Initiative and Mountain Area Planning System the administration sought to strike a balance between development and environmental protection. Martin led an unsuccessful bid to land the Superconducting Super Collider.

Martin contended that education was his first priority and, toward that end, increased spending on public schools and teacher salaries. An advocate of a career ladder for teachers, Martin clashed with the legislature over provisions of the Basic Education Program, adopted in 1985. The governor instituted special training in foreign languages, a day care initiative, and a campaign against illiteracy. Martin launched campaigns against infant mortality and substance abuse and advocated an accelerated prison construction program.

In his first inaugural address Martin spoke of “One United State” and improvements to the quality of life. A proponent of open government, he reduced the number of state employees subject to political firing. Other initiatives pursued by the administration included campaigns against infant mortality and substance abuse, an accelerated prison construction, program, the Adopt-a-Highway program, the planting of wildflowers along the highways, aquaculture research, improved beach access, estuarine study projects, reinstituted passenger rail service, and an expanded film industry.

By 1993 the Republican Party had established broad appeal to middle-class voters in North Carolina. Martin, advocate of the gubernatorial veto and appointment of judges, laid the groundwork for subsequent political changes. After his self-pronounced retirement from officeholding, Martin became chairman of the Research Development Board at the Carolinas Medical Center in Charlotte.