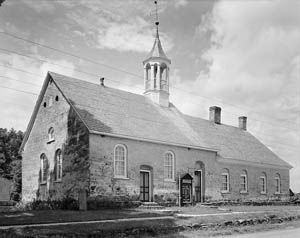 Winston-Salem is the county seat of Forsyth County.  It was formed in 1913 from the amalgamation of the towns of Winston (established 1849) and Salem (established 1766). Winston was named for Colonel Joseph Winston, who fought at both King's Mountain and Guilford Courthouse during the Revolutionary War, and was later a state Senator and US House member.

The town of Salem is named for the Latinized form of "Shalom" (Peace).  It was the administrative hub of several settlements founded by Moravians beginning in 1753.  In 1772, the school that became Salem Academy (which is still operating) opened its doors.  Artisans and craftsmen sold handcrafted goods which were transported throughout the state, first via the Great Wagon Road, the Western Plank Road, and the burgeoning railroad lines and the town grew slowly but steadily.  The Nissen Wagon Works opened in 1834, and the first textile mill in 1840.

When Forsyth County was formed in 1849, Salem declined to act as county seat.  Instead, the church fathers sold 31 acres to the county commissioners on which to build the new county seat of Winston.

By 1880, both the Hanes Brothers (textiles) and R.J. Reynolds (tobacco) had opened factories in Winston, and the first Wachovia Bank had incorporated, heralding an industrial boom in the city.  Slater Industrial Academy (later Winston-Salem State University) opened in 1892.  Wake Forest College moved their medical program to the city in 1941, and 10 years later, ground was broken to move the entire University to Winston-Salem.  Old Salem Inc. was chartered in 1950, and saved more than 60 buildings from the original Moravian Village, and is now a nationally recognized living museum. 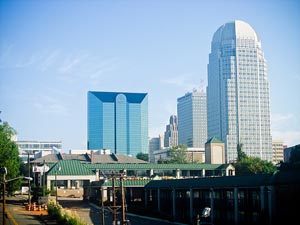