The Founding of Virginia

England planted its first successful North American colony at Jamestown in 1607, but settlers fought Indians and disease, and the colony grew slowly. By the end of the seventeenth century, Virginia had established tobacco as its main crop, a representative government, and slavery as a dominant system of labor.

In 1606, a group of wealthy London businessmen petitioned King James I for a charter to establish a colony in the New World. They formed the Virginia Company and set out to establish a permanent English settlement in the Americas. The British were in competition with the Spanish who had established colonies in central and South America and had stolen vast amounts of treasure and wealth from the native inhabitants. The English were eager to find similar wealth in the northern part of the Americas. They also wanted to establish permanent towns in the New World to stake a claim for the British government.

In 1607, 104 men traveled from England and landed in the Chesapeake Bay. They traveled up the James River to establish a settlement out of sight from passing Spanish pirates who might sack the town or steal the supplies.

The men of the Virginia company

About half of the men of the Virginia Company were wealthy gentlemen and their personal servants. Neither the gentlemen nor their servants would have known much about agriculture or farming. There were a few farmers and artisans on the ship, but not nearly enough workers to plant and grow the food that the men would need. Most likely, the Virginia Company did not plan to live off of the crops they produced with on their own. Historians believe that these men intended to survive by hunting, gathering berries and roots, and by trading or taking food from Indians. The Spanish had been very successful at pillaging the wealth of the New World, and it is likely that these Englishmen imagined that there would be easy wealth to be found in Virginia and that they would easily intimidate the native people into providing them with food and resources.

They were mistaken. The Algonquian Indians who lived around the Chesapeake Bay were part of a vast political alliance and their leader, Powhatan, did not look kindly on the intruders who demanded food and strained the resources of his people. This lack of preparation set the Virginia Company up for starvation and conflict with the Indians.

The men built a fort and named their community Jamestown, after their king. Disease, sickness, and famine quickly set in. Jamestown was located in a very unhealthy part of the Chesapeake. The James River is a tidal river, meaning that the water ebbs and flows in relation to the tide. It is, therefore, a slow moving river and bacteria and germs thrived in the water. Swampy land bred mosquitoes, which carried malaria. The men also threw trash and sewage into the river, polluting an already unhealthy water source.

The lack of clean water, the fact that Jamestown was built on a swamp, the lack of food, and the men's disinterest in agriculture all contributed to a high death rate. At the end of the first year, there were only 34 men still alive, and it looked like Jamestown might suffer the same fate as Roanoke. The colony survived, but only barely. Over the next thirteen years, more than 6,000 people would emigrate to Jamestown, but only 1,300 would survive.

Powhatan saw the unprepared colonists' disinterest in agriculture and continual begging for food, as well as the number of them who died, and he became convinced that the English were weak and could easily be pushed out of his territory. Powhatan had many reasons to want to get rid of the English -- first being that the English were straining the resources of his people. The Chesapeake Indians were a subsistence culture that produced only enough food to feed themselves, and they could not support hundreds of Englishmen.

In 1618, Powhantan attacked the fort at Jamestown but did not succeed in wiping out the village. He negotiated a peace with the English and created an alliance through the marriage of his youngest daughter, Pocohontas, to John Rolfe, one of the leading colonists. But peace would not last. In 1622 and again in 1636, the Algonquins, led by Powhantan's half-brother, tried to destroy the English settlement. Each of these attacks resulted in great losses for the English, as many as a third of the colonists.

The English retaliated. In 1622, they invited the Indians to negotiate a peace, but instead they poisoned the liquor they served to the Indians and killed nearly 200 men. In the long run, they had one key advantage over their Algonquin enemies: a constant influx of immigrants. In 1644 the Algonquins again attempted to rid their territory of the English, but were able to kill only 10 percent of the colonists. The tide was slowly turning to the advantage of the English.

The Chesapeake Indians grew tobacco and used it in their religious ceremonies. The English settlers tried to sell some of this tobacco in England, but they were unsuccessful. Virginia tobacco had a stronger odor and flavor than tobacco grown in the West Indies, and the English consumers preferred the milder variety. In 1614, John Rolfe planted this sweeter tobacco in Virginia, and raised enough to ship four barrels of tobacco to England. Rolfe's tobacco sold for a high price, and tobacco quickly became Virginia's main cash crop.

At first, the governors of Virginia discouraged settlers from growing tobacco because they wanted them to grow food. But the colonists, who wanted riches and not just subsistence, were undeterred. They traded tobacco for food brought by ships from other colonies.

Rolfe's discovery that the West Indies tobacco, which he called Orinoco tobacco, could be grown in Virginia saved the colony. Over the next decades, tobacco became a very profitable crop. With the prospect of making money in Virginia, it was easier to recruit new settlers, and immigration allowed the colony to grow even though death rates were still very high. In addition, colonists needed land to grow their tobacco, and they began moving inland, up the James River and away from the swampy waters near the coasts. Further inland, the water was cleaner and there were fewer mosquitoes and less disease. Colonists started to live longer.

The introduction of tobacco farming also created a need for cheap labor. To maximize profits, land owners needed to find people who could work long, hot hours in the field, but for very little pay.

Colonists first used indentured servants for labor. The Virginia Company paid for people's transportation from England to Virginia, which was quite expensive. In Virginia, plantation owners reimbursed the company for that cost, and the new immigrant was required to work for the plantation owner for a period of time, usually seven years, to pay off the debt. Because mortality rates were so high, only a small fraction of servants in the colony's early years survived for seven years. (Of course, many of the plantation owners died, too.)

If a servant survived their years of servitude, though, he or she would be free. A man would then be able to buy property, something that would have been beyond their means if they stayed in England. The hope of buying land in America made the prospect of seven years of essentially slave labor worthwhile to many people.

Most women who came to Virginia as indentured servants eventually got married. Men out numbered women about four to one in Virginia, and so even a servant could marry a wealthy plantation owner. Most female servants were from poor families, and could never have married "above their station" in England.

In 1619, two passing British ships sold 21 slaves to the Governor of Virginia -- the first African slaves in North America. Indentured servants would remain the most common labor supply in Virginia well into the 1660s, though. Slaves were about three times as expensive as indentured servants because a slave was property for life, whereas a servant's term of indenture was only for seven years. But since life expectancy in mid-1600s Virginia was only about seven years, plantation owners could expect as much work from an indentured servant as from a slave. Slaves were a bad investment.

As living conditions improved, though, slavery became more profitable. Slowly, after about 1660, the colony became more stable and people began to live longer. Slavery would increase and indentured servitude would decrease throughout the rest of the seventeenth century. Although people continued to come to America as indentured servants until the Revolution, by the beginning of the eighteenth century, slavery was becoming established as the colony's future.

To control slaves, plantation owners created harsh slave codes. They made slavery hereditary, a condition passed from a mother to her children. To keep the races separate, they also made it illegal for a white person to marry a black person, although this was usually only enforced when a black man tried to marry a white woman. If a slave committed a crime, he or she was punished more severely than a white person. It was also impossible to convict a slave owner of murder; they reasoned that no person would willfully destroy his property. These laws served to put Africans and their descendants into a different social and legal category than white servants. Other colonies passed similar laws, modeled on the slave codes of Virginia.

During the first decades of settlement, the Virginia company tried a number of reforms to help make the colony a success. One of the most important reforms was the creation of the House of Burgesses, a governing body modeled after the British House of Commons and chosen in part by the landowning white men in Virginia. The British, including the colonists in Virginia, prided themselves on the rights of citizens to participate in their government.

The House of Burgesses was made up of 22 members. One was the governor, who was chosen by the directors of the Virginia Company, and he in turn chose six men as his council. The other 15 Burgesses were elected representatives of the various parts of the colony (and eventually from its counties). The House of Burgesses was to meet once a year to make laws for Virginia. These laws could be vetoed by the Governor, by his council, and by the directors of the Virginia Company in London.

Ironically, the House of Burgesses -- the first representative government in British America -- first met in 1619, the same year the first slaves were purchased in Virginia. Democracy and slavery would be linked for a long time to come.

By the 1620s, nearly 70 percent of all the English settlers who went to Virginia had died. Although tobacco was starting to become profitable, the Virginia Company had failed to make a profit for its investors. Some blamed poor leadership in the colony -- a valid complaint. But the men and women who went to Virginia were ill-prepared and unequipped for the harsh living conditions they found. In response to the failures of the Virginia Company, and James I revoked the colony's charter in 1624. The colony came under the direct control of the king. James planned to disband the House of Burgesses, but he died the following year, and his successor, Charles I, would soon be too busy fighting opposition in Parliament to worry about Virginia. As a result, Virginians kept their representative government. It would be a number of years, though, before the colony became more stable. 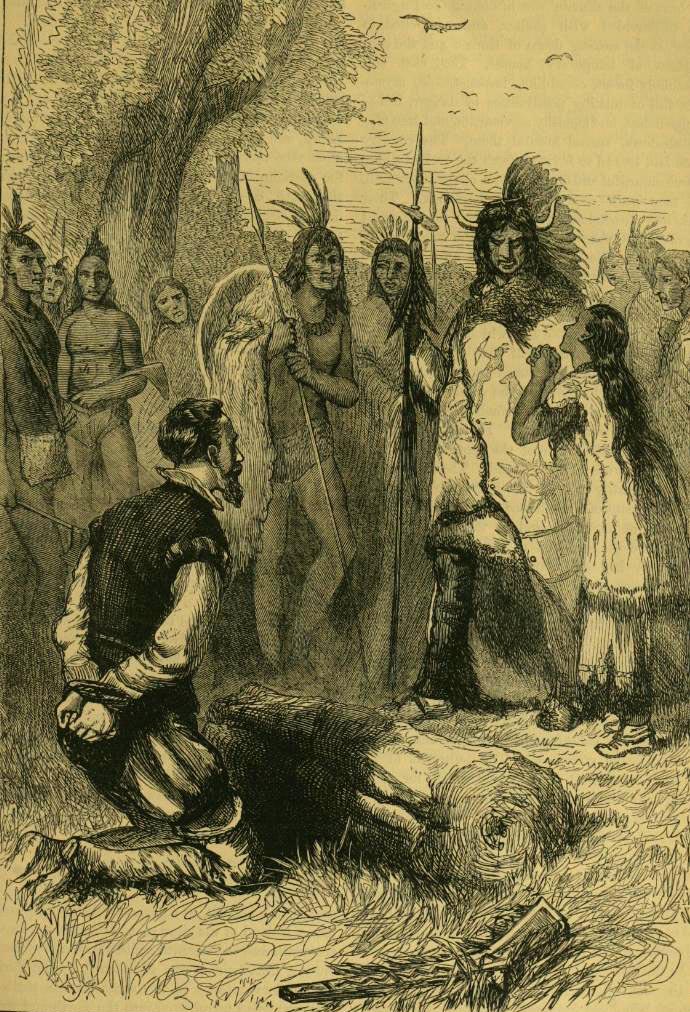 John Smith wrote that Pocahontas, when a young girl in 1607, had saved him from execution by her father. The story may or may not be true, but it has become a part of American mythology -- as shown in this illustration from the late 1800s. 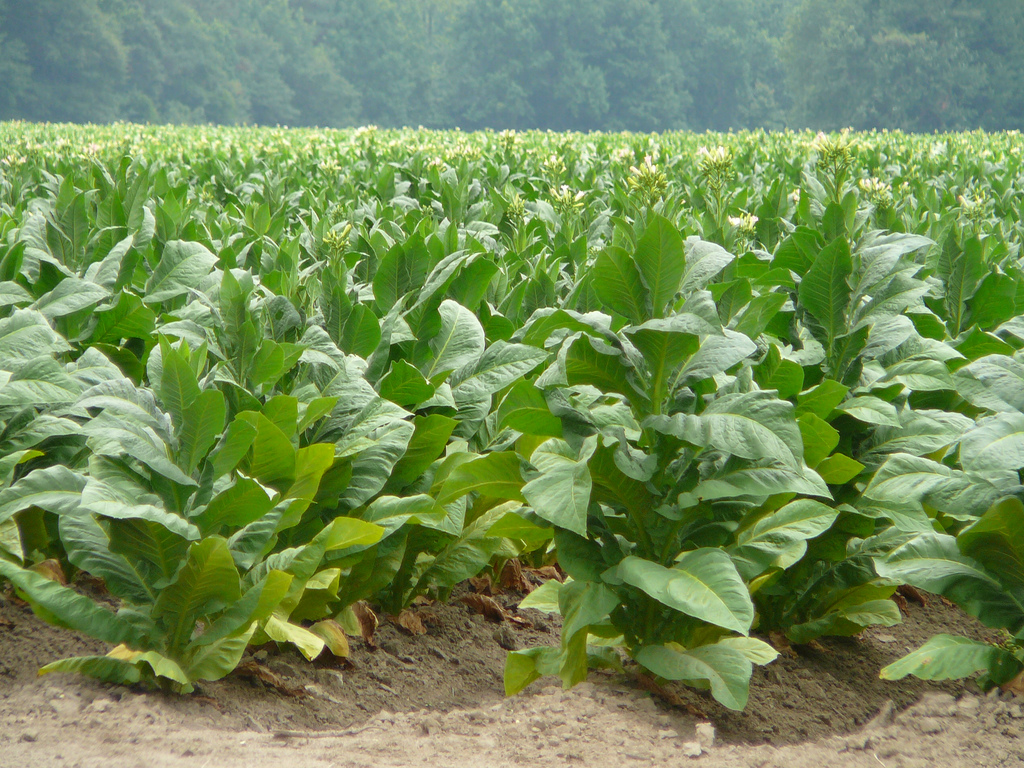 Profits from growing tobacco saved the Jamestown colony and fueled its growth. 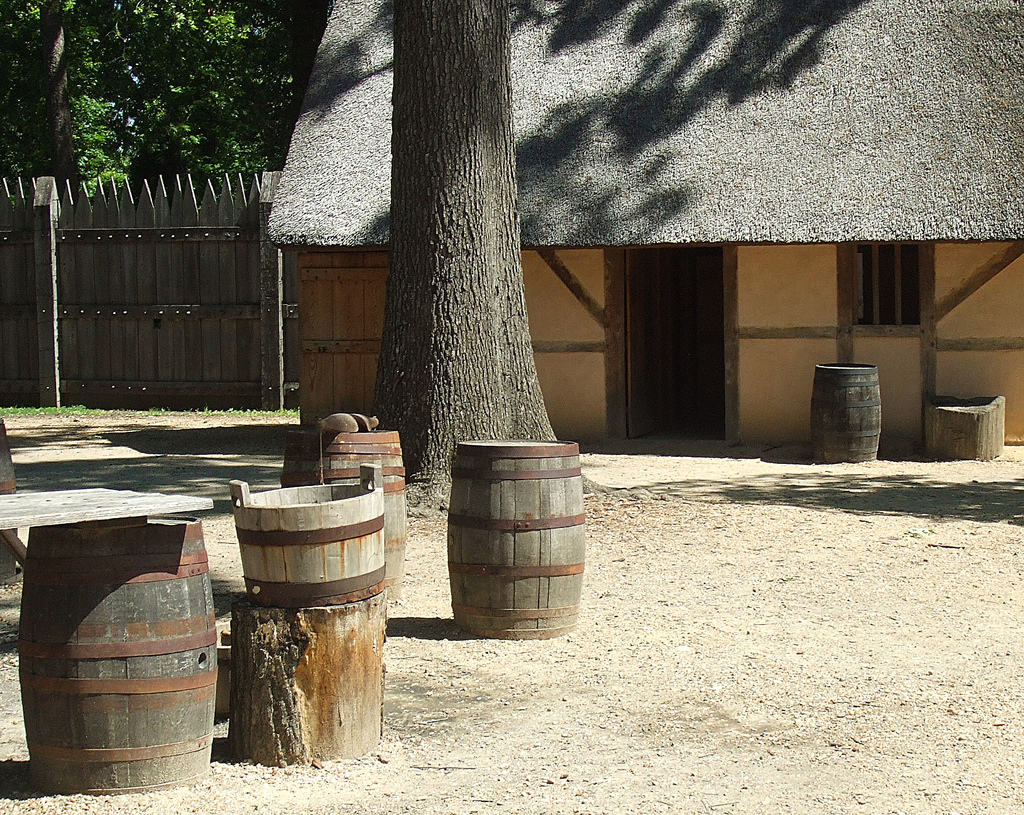 The Jamestown settlement has been reconstructed and is maintained by the National Park Service. 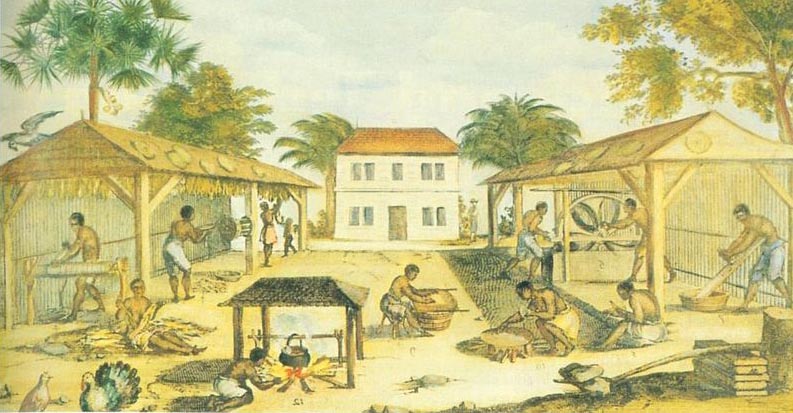 This 1670 painting shows enslaved Africans working in the tobacco sheds. 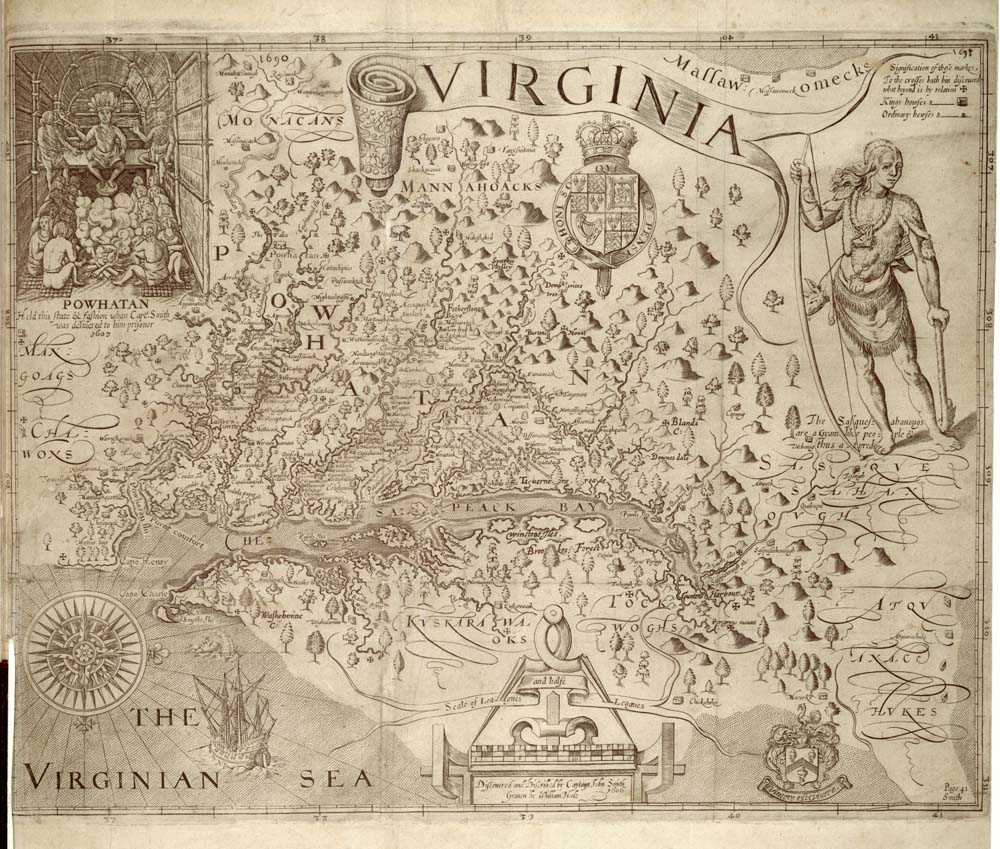