"Anybody here know why these two should not be wed, speak now or forever hold your peace."

With this opening line, a pop-culture phenomenon was born on October 3, 1960, at 9:30 p.m. when The Andy Griffith Show premiered. The show starred Andy Griffith, a North Carolina native and graduate of the University of North Carolina, who had risen to national fame with the comic monologue, What It Was Was Football, and a starring role in the stage and film version of No Time For Sergeants.

The series pilot aired on February 15, 1960, and was actually an episode of The Danny Thomas Show. It introduced viewers to Sheriff Andy Taylor, played by Griffith, and the fictional town of Mayberry, North Carolina, which is widely believed to be based on Griffith’s hometown of Mount Airy, North Carolina—although he has often denied it. The following October the series officially began with an installment titled “The New Housekeeper.” The show opened with Andy’s former housekeeper, Rose, getting married and moving away. Andy then asks Aunt Bee, who helped raise him, to assist in taking care of his son, Opie. Although he adamantly opposes Aunt Bee in the beginning—she can’t fish, catch frogs, or play baseball like Rose—Opie ends up accepting her into the household, fearing that she can not survive in a world with such limited skills. This episode also introduced viewers to Deputy Barney Fife, Sheriff Taylor’s comically inept sidekick.

Although The Andy Griffith Show remains one of the most popular television series of all time, it was initially disparaged by several media commentators. A review in the October 4, 1960 New York Times commented that the show was “only mildly entertaining.” Jack Elinson, a script writer during the first two seasons, remarked that the show was not “treated too kindly by the critics out here, the hip Hollywood people” and that the “cast and everybody was just a little glum.” On October 6, in the “Goings On” section of the Raleigh News and Observer, Raymond Lowery wrote that the reviews from the New York papers “weren’t good,” but that “they weren’t all bad” and that the “gentle, relaxed, family-type series would bear watching [and] that it had possibilities which may be realized later."

What several reviewers disliked, however, countless television viewers loved. Elinson went on to say that the cast and crew calmed down and cheered up when they received the show’s “through the roof” Nielsen Ratings. Other commentators began to notice the show’s popularity as well. On October 16, 1960, only 13 days after the series’ debut, writer Earl Wilson observed that Andy Griffith was already “a big TV star.” One year later, at the beginning of the show’s second season, a Newsweek article noted Griffith’s “strangely popular situation comedy.” The show’s status only increased during its eight-year run, and it even garnered the Nielsen Rating’s number-one ranking in its final season. In the almost forty years since the last episode, The Andy Griffith Show continues to appeal to countless fans, and it remains as one of the most well-liked television series in American history. 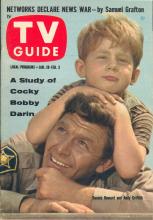 Andy Griffith and Ronnie Howard on the cover of TV Guide in 1961.