In the early morning hours of August 6, 1945, a B-29 bomber named Enola Gay took off from the island of Tinian and headed north by northwest toward Japan. The bomber's primary target was the city of Hiroshima, located on the deltas of southwestern Honshu Island facing the Inland Sea. Hiroshima had a civilian population of almost 300,000 and was an important military center, containing about 43,000 soldiers.

The bomber, piloted by the commander of the 509th Composite Group, Colonel Paul Tibbets, flew at low altitude on automatic pilot before climbing to 31,000 feet as it neared the target area. At approximately 8:15 a.m. Hiroshima time the Enola Gay released "Little Boy," its 9,700-pound uranium bomb, over the city. Tibbets immediately dove away to avoid the anticipated shock wave. Forty-three seconds later, a huge explosion lit the morning sky as Little Boy detonated 1,900 feet above the city, directly over a parade field where soldiers of the Japanese Second Army were doing calisthenics. Though already eleven and a half miles away, the Enola Gay was rocked by the blast. At first, Tibbets thought he was taking flak. After a second shock wave (reflected from the ground) hit the plane, the crew looked back at Hiroshima. "The city was hidden by that awful cloud... boiling up, mushrooming, terrible and incredibly tall," Tibbets recalled. The yield of the explosion was later estimated at 15 kilotons (the equivalent of 15,000 tons of TNT).

On the ground moments before the blast it was a calm and sunny Monday morning. An air raid alert from earlier that morning had been called off after only a solitary aircraft was seen (the weather plane), and by 8:15 the city was alive with activity -- soldiers doing their morning calisthenics, commuters on foot or on bicycles, groups of women and children working outside to clear firebreaks. Those closest to the explosion died instantly, their bodies turned to black char. Nearby birds burst into flames in mid-air, and dry, combustible materials such as paper instantly ignited as far away as 6,400 feet from ground zero. The white light acted as a giant flashbulb, burning the dark patterns of clothing onto skin and the shadows of bodies onto walls. Survivors outdoors close to the blast generally describe a literally blinding light combined with a sudden and overwhelming wave of heat. (The effects of radiation are usually not immediately apparent.) The blast wave followed almost instantly for those close-in, often knocking them from their feet. Those that were indoors were usually spared the flash burns, but flying glass from broken windows filled most rooms, and all but the very strongest structures collapsed. One boy was blown through the windows of his house and across the street as the house collapsed behind him. Within minutes 9 out of 10 people half a mile or less from ground zero were dead.

People farther from the point of detonation experienced first the flash and heat, followed seconds later by a deafening boom and the blast wave. Nearly every structure within one mile of ground zero was destroyed, and almost every building within three miles was damaged. Less than 10 percent of the buildings in the city survived without any damage, and the blast wave shattered glass in suburbs twelve miles away. The most common first reaction of those that were indoors even miles from ground zero was that their building had just suffered a direct hit by a bomb. Small ad hoc rescue parties soon began to operate, but roughly half of the city's population was dead or injured. In those areas most seriously affected virtually no one escaped serious injury. The numerous small fires that erupted simultaneously all around the city soon merged into one large firestorm, creating extremely strong winds that blew towards the center of the fire. The firestorm eventually engulfed 4.4 square miles of the city, killing anyone who had not escaped in the first minutes after the attack. One postwar study of the victims of Hiroshima found that less than 4.5 percent of survivors suffered leg fractures. Such injuries were not uncommon; it was just that most who could not walk were engulfed by the firestorm.

Even after the flames had subsided, relief from the outside was slow in coming. For hours after the attack the Japanese government did not even know for sure what had happened. Radio and telegraph communications with Hiroshima had suddenly ended at 8:16 a.m., and vague reports of some sort of large explosion had begun to filter in, but the Japanese high command knew that no large-scale air raid had taken place over the city and that there were no large stores of explosives there. Eventually a Japanese staff officer was dispatched by plane to survey the city from overhead, and while he was still nearly 100 miles away from the city he began to report on a huge cloud of smoke that hung over it. The first confirmation of exactly what had happened came only sixteen hours later with the announcement of the bombing by the United States. Relief workers from outside he city eventually began to arrive and the situation stabilized somewhat. Power in undamaged areas of the city was even restored on August 7th, with limited rail service resuming the following day. Several days after the blast, however, medical staff began to recognize the first symptoms of radiation sickness among the survivors. Soon the death rate actually began to climb again as patients who had appeared to be recovering began suffering from this strange new illness. Deaths from radiation sickness did not peak until three to four weeks after the attacks and did not taper off until seven to eight weeks after the attack. Long-range health dangers associated with radiation exposure, such as an increased danger of cancer, would linger for the rest of the victims' lives, as would the psychological effects of the attack.

No one will ever know for certain how many died as a result of the attack on Hiroshima. Some 70,000 people probably died as a result of initial blast, heat, and radiation effects. This included about twenty American airmen being held as prisoners in the city. By the end of 1945, because of the lingering effects of radioactive fallout and other after effects, the Hiroshima death toll was probably over 100,000. The five-year death total may have reached or even exceeded 200,000, as cancer and other long-term effects took hold.

At 11:00 a.m., August 6 (Washington D.C. time), radio stations began playing a prepared statement from President Truman informing the American public that the United States had dropped an entirely new type of bomb on the Japanese city of Hiroshima -- an "atomic bomb." Truman warned that if Japan still refused to surrender unconditionally, as demanded by the Potsdam Declaration of July 26, the United States would attack additional targets with equally devastating results. Two days later, on August 8, the Soviet Union declared war on Japan and attacked Japanese forces in Manchuria, ending American hopes that the war would end before Russian entry into the Pacific theater. By August 9th, American aircraft were showering leaflets all over Japan informing its people that "We are in possession of the most destructive explosive ever devised by man. A single one of our newly developed atomic bombs is actually the equivalent in explosive power to what 2,000 of our giant B-29s can carry on a single mission. This awful fact is one for you to ponder and we solemnly assure you it is grimly accurate. We have just begun to to use this weapon against your homeland. If you still have any doubt, make inquiry as to what happened to Hiroshima when just one atomic bomb fell on that city." Meanwhile, Tibbets's bomber group was simply waiting for the weather to clear in order to drop its next bomb, the plutonium weapon nicknamed "Fat Man" that was destined for the city of Nagasaki.

Nagasaki was an industrial center and major port on the western coast of Kyushu. As had happened at Hiroshima, the "all-clear" from an early morning air raid alert had long been given by the time the B-29 had begun its bombing run. A small conventional raid on Nagasaki on August 1st had resulted in a partial evacuation of the city, especially of school children. There were still almost 200,000 people in the city below the bomb when it exploded. The hurriedly-targeted weapon ended up detonating almost exactly between two of the principal targets in the city, the Mitsubishi Steel and Arms Works to the south, and the Mitsubishi-Urakami Torpedo Works to the north. Had the bomb exploded farther south the residential and commercial heart of the city would have suffered much greater damage.

In general, though Fat Man exploded with greater force than Little Boy, the damage at Nagasaki was not as great as it had been at Hiroshima. The hills of Nagasaki, its geographic layout, and the bomb's detonation over an industrial area all helped shield portions of the city from the weapon's blast, heat, and radiation effects. The explosion affected a total area of approximately 43 square miles. About 8.5 of those square miles were water, and 33 more square miles were only partially settled. Many roads and rail lines escaped major damage. In some areas electricity was not knocked out, and fire breaks created over the last several months helped to prevent the spread of fires to the south.

Although the destruction at Nagasaki has generally received less worldwide attention than that at Hiroshima, it was extensive nonetheless. Almost everything up to half a mile from ground zero was completely destroyed, including even the earthquake-hardened concrete structures that had sometimes survived at comparable distances at Hiroshima. According to a Nagasaki Prefectural report "men and animals died almost instantly" within 1 kilometer (0.62 miles) of the point of detonation. Almost all homes within a mile and a half were destroyed, and dry, combustible materials such as paper instantly burst into flames as far away as 10,000 feet from ground zero. Of the 52,000 homes in Nagasaki, 14,000 were destroyed and 5,400 more seriously damaged. Only 12 percent of the homes escaped unscathed. The official Manhattan Engineer District report on the attack termed the damage to the two Mitsubishi plants "spectacular." Despite the absence of a firestorm, numerous secondary fires erupted throughout the city. Fire-fighting efforts were hampered by water line breaks, and six weeks later the city was still suffering from a shortage of water. A U.S. Navy officer who visited the city in mid-September reported that, even over a month after the attack, "a smell of death and corruption pervades the place." As at Hiroshima, the psychological effects of the attack were undoubtedly considerable.

As with the estimates of deaths at Hiroshima, it will never be known for certain how many people died as a result of the atomic attack on Nagasaki. The best estimate is 40,000 people died initially, with 60,000 more injured. By January 1946, the number of deaths probably approached 70,000, with perhaps ultimately twice that number dead total within five years. For those areas of Nagasaki affected by the explosion, the death rate was comparable to that at Hiroshima.

The day after the attack on Nagasaki, the emperor of Japan overruled the military leaders of Japan and forced them to offer to surrender (almost) unconditionally.

The Most Fearsome Sight: The Atomic Bombing of Hiroshima

The Atomic Bombing of Hiroshima and Nagasaki, August 1945 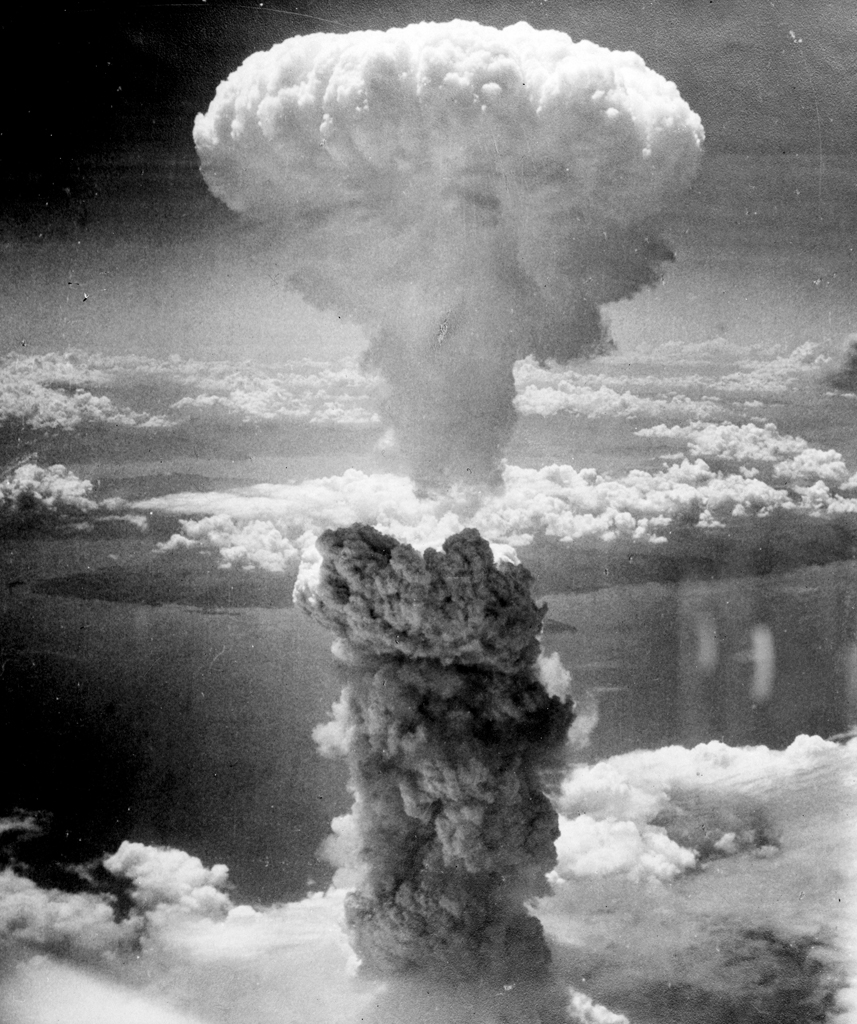 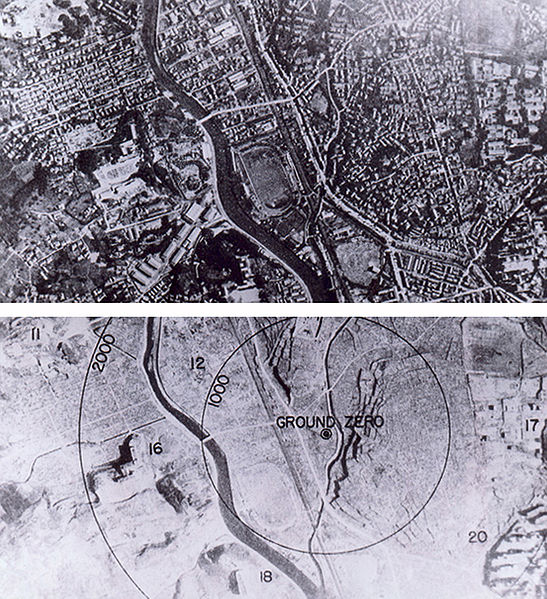 Aerial photos taken before and after the atomic bomb was dropped on Nagasaki. 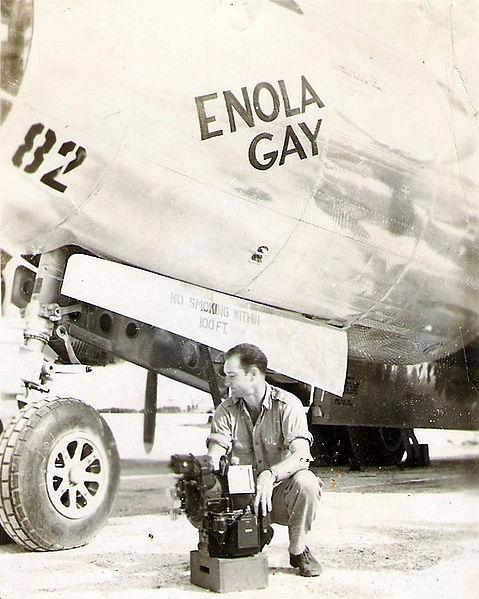 Re-Thinking the Dropping of the Atomic Bombs

from the Harry S Truman Presidential Library and Museum