Though distressing from a twenty-first-century perspective, the early history of African-American segregation in the Salem community is interesting to recount. Two buildings, St. Philip’s Church and a school, as well as the presence of a neighborhood attest to changing attitudes of the white Moravian majority during the 19th century.

Salem Moravians held African-American slaves until the end of the Civil War. During the 18th century, however, they were true to the belief that even though individuals have different social duties and roles in this world, all Moravians are spiritually equal. Hence, Moravian whites and blacks worshiped side-by-side and were buried side-by-side in the same God’s Acre, the Moravian cemetery. Racial prejudice increased throughout the South, however, and even the Moravians’ egalitarian viewpoint wavered.

Early records from Salem indicate that at the beginning of the 19th century, African Americans were required to sit in the balcony or in the back of the church apart from the white Moravians. In 1810, Peter Oliver, a skilled potter who had managed to purchase his freedom, was one of the last African-American Moravians buried in God’s Acre. All African Americans were interred in the Strangers’ Graveyard after 1816.1

Constantly treated as second-class members of the church, African Moravians grew frustrated. With about fifty other African Americans, they organized their own mission congregation in 1822 and built a simple log church that measured 32? by 28?. Originally called the “Negro Church” or “African Church”, the old log church was reconstructed in 2003. The Female Missionary Society founded a Sunday school there in 1827. They taught African Americans to read and write even after 1831, when the state of North Carolina made teaching reading and writing to enslaved people illegal. For some time after the Civil War, the log church served as the Freedman’s Hospital.

By 1861, the congregation had outgrown the log church, and a new, larger Greek Revival style brick church with a bell tower, altar and pews was constructed. After 1914, this church was called St. Philips Church. St. Philips is the oldest African-American congregation in the United States.

The first school in Forsyth County for African Americans was built in 1867 on land that belonged to the Moravian Church. Elias A. Vogler, a leader in the Salem community, was instrumental in securing the selected land rent-free from the Church. Located just south of Salem Creek and about a quarter of a mile away from the African-American church, the school was open tuition-free to all African-American children, not just to those from the Salem community. The former school ground is now part of Winston-Salem’s Happy Hill Park. After the Civil War, many people left the rural areas and moved into town. School enrollment increased and a new school was built in the early 1890’s.

After 1865, emancipated African Americans began to work and earn money of their own. Many worked in tobacco factories. Soon they aspired to own their own property and homes. In 1870, Elias A. Vogler, a long-time supporter of the African-American community, proposed building a neighborhood southeast of Salem, across Salem Creek, as a new settlement for African Americans. The area, named Liberia, became one of the first settlements in the South where freedmen could purchase land. The first lots in Liberia sold for $10.00 each. Today, the neighborhood is called Happy Hills Gardens.

1. In 1772, the Strangers’ Graveyard had been designated as a place to bury non-Moravians who happened to die while they were in Salem.

A separate African-American church, a school and a community near Salem. - Original Source 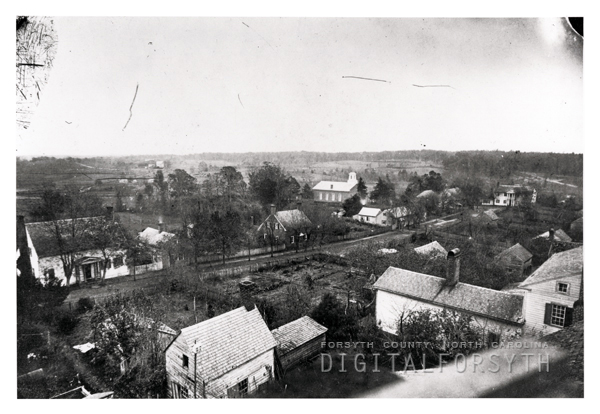 Church Street in Salem, North Carolina. An old African American Moravian log church, built in 1823, is seen near the center of the image--small building with two chimneys. An updated brick church, built in 1861, can be seen to the right and behind it. 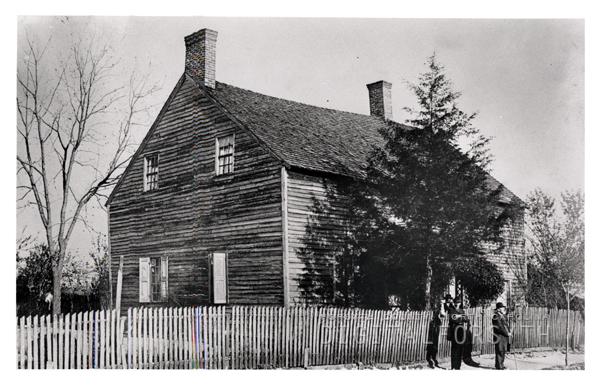 This small log church was built in Salem, North Carolina in 1823 as the Moravian church for African Americans. 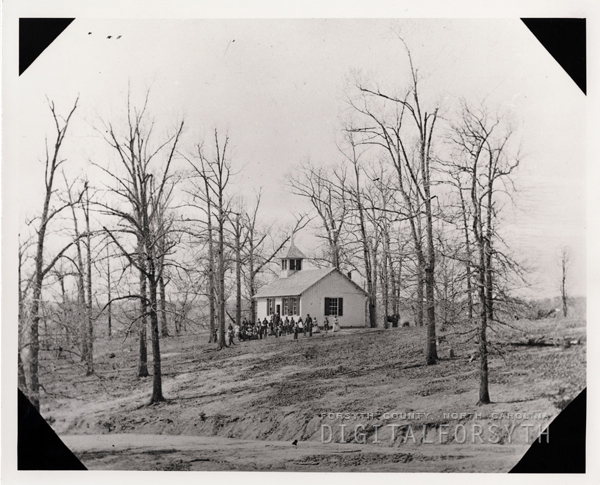 Circa 1870 photo of the first school for African Americans in Forsyth County.