Naval Stores and the Longleaf Pine

In a time before cars, trains, and airplanes, water was often the easiest -- or the only -- means of long-distance transportation. Eighteenth-century ships were sailing ships, and they were made almost entirely of wood. Building and maintaining wooden ships required specialized materials and a global industry to produce them.

Naval stores are goods (stores, or things stored for later use) used in building and maintaining ships. Originally, "naval stores" included everything used to build a ship, including wood and cloth, but by the end of the colonial period it meant tar, pitch, and turpentine. All of these products were manufactured from pine trees, which North Carolina had in abundance. For that reason and others, North Carolina became a key supplier to the British Navy, and naval stores became central to the colony's economy.

If you've ever mistakenly thrown an evergreen bough on a campfire, used a chipper-shredder to clear brush, or even put up a Christmas tree, you know that pine trees and their relatives have gummy, sticky sap. Pine resins make a sticky mess that's hard to wash off your hands and when burned make a smelly smoke that will ruin any s'more, but they also make pine trees a valuable natural resource. Those resins protect the tree, and they can also be used to protect other wood from the weather -- especially, in the colonial period, the wooden hulls of ships.

Tar is a dark, thick, sticky liquid produced by burning pine branches and logs very slowly in kilns. Seamen painted coats of tar on riggings that held masts and sails in place. It was also used on land, as axle grease, to preserve fenceposts, and to cover wounds on livestock to help them heal. You may have smelled it when you passed a new road being laid down.

Pitch is produced by boiling tar to concentrate it. It was painted on the sides and bottoms of wooden ships to make them watertight. At room temperature, pitch is nearly solid, much like modern caulk, which has similar uses. When heated, it flows like a liquid and can be used as a paint.

Turpentine is distilled from a gum that living pine trees secrete to protect wounds in their trunks. It was not much used in the colonial period, but by the nineteenth century it was used in manufacturing paint and a variety of other goods as well as for medicinal purposes.1 You may have used this colorless but strong-smelling fluid used as a thinner for oil-based paints.

Life and work in the pine woods

In the 1850s, Frederick Law Olmsted, a journalist and landscape designer from Connecticut, traveled extensively through the South to report on slavery, southern people, and the southern economy. In his book A Journey in the Seaboard Slave States; With Remarks on Their Economy he gave a detailed description of how naval stores were produced at that time, and he also made some observations about the people, white and black, who lived and worked there. What Olmsted described is probably not too different from the process of making naval stores a hundred years earlier, and will give you a sense of what the work was like.

The growth of an industry

By the sixteenth and seventeenth centuries, when the English needed more and more ships for trade and war, most of England's forests had been cut down for lumber and firewood. During the 1600s, England relied on imports of naval stores from Sweden. But Sweden's naval stores industry fell under monopoly control by a single company, which more than doubled prices. At the same time, demand was growing. As European nations fought not only on the European continent but around the world, they built bigger navies and needed to replace ships lost in battle. A series of wars around the turn of the eighteenth century raised the demand for naval stores rapidly, and prices went even higher as supplies dwindled.

Clearly, England needed a new source of naval stores, and it turned to its North American colonies. To encourage the American naval stores industry, Parliament passed a law in 1705 that required the British Navy to pay inflated prices for tar, pitch, turpentine, rosin, hemp, and masts from British colonies.

England had tried before to encourage its colonists to manufacture naval stores. In Virginia, the Jamestown colonists had briefly tried making tar, but they quickly found that tobacco could bring them more money. Efforts to build a naval stores industry in New York and New England failed for similar reasons: Other crops and other industries were more profitable, and the colonists did not want to take on the messy work of making tar and pitch. And by 1700, New Englanders had cut down most of their native pine forests, which made manufacturing naval stores nearly impossible.

The southern colonies, though, had a longleaf pine forest that covered 90 million acres, including nearly all of North Carolina's coastal plain and much of the southern Piedmont. And while Virginians and South Carolinians could grow other crops for export -- such as tobacco, indigo, and rice -- the soil and climate of most of eastern North Carolina didn't make it profitable to grow those crops on a large scale. Farmers in the pine belt who needed cash found that naval stores were their best option.

Until about 1720, most of Carolina's naval stores were produced in South Carolina, but as settlers moved up the Cape Fear River in North Carolina, they began to manufacture naval stores there. North Carolina's industry grew so quickly that the ports of Brunswick (established in 1727) and Wilmington (in 1739) grew up to handle exports. The industry then spread into the areas around New Bern and Washington and up the Neuse River and the appropriately named Tar River. By the 1770s, North Carolina was responsible for 70 percent of the tar exported from North America and 50 percent of the turpentine, and naval stores were the colony's most important industry.2 Most of that production came from small farmers who might have one or a few slaves and also raised other crops or livestock.

The decline of the longleaf pine forest

The longleaf pine made North Carolina's naval stores industry possible, but today the longleaf pine has nearly vanished from the landscape. It's difficult to imagine just how vast the pine forests once were.

The longleaf pine is specially adapted to forest fires -- not only can it survive fires, but it needs frequent forest fires to continue to exist! Longleaf pine seeds germinate and put down roots quickly in the bare mineral-rich soil left behind by fires. Seedlings stay low to the ground, like grass, to survive as fire sweeps over them, then undergo a growth spurt that quickly puts their fire-sensitive needles above the flames. Mature trees have fire-resistant bark.

Because other pines and hardwoods such as oaks are quickly killed by fire, the longleaf was typically the only tree in its forests, with great spaces between mature trees. In those open spaces, grasses and specially adapted flowers grew. The result was a unique ecosystem, a forest unlike any forest most of us today have seen. It is sometimes called the "longleaf pine savanna" because it is essentially a kind of grassland with trees.

Before Europeans arrived in North Carolina, longleaf pine forests were maintained by regular forest fires caused by lightning, and Indians also burned underbrush to flush out game. But by the early nineteenth century, dense settlement and the growth of the naval stores industry had taken a massive toll on the longleaf pine forests. When trees were not cut down, they were tapped to harvest their gum, which weakened them and made them susceptible to disease, insects, and drought. Other kinds of agriculture damaged the forest as well: Farmers let their hogs roam freely in the woods to forage for their food, which kept their costs down and meant they didn't have to build fences. But hogs ate the cones of the longleaf pines and rooted up seedlings, preventing the longleaf from replacing itself.3

And although no one at the time understood the role of fire in that ecosystem, by suppressing forest fires and not encouraging regular burns, North Carolinians were slowly destroying the longleaf's habitat. When fires did erupt, there was so much undergrowth to fuel them that they burned too hot and destroyed the longleaf seedlings.

Today, few stands of longleaf pine forest remain in North Carolina. One stand is being restored and maintained by regular burning in a part of Camp Lejune, and you can explore it on this virtual field trip. Elsewhere in the state, managers of parks, gardens, and historic sites are experimenting with using fire to restore areas of longleaf forest. Although the longleaf will probably never regain the range it once had, we may one day be able to restore enough savanna to see what we're missing.

3. Free-ranging hogs did a great deal of damage to other forest ecosystems, too; see William Cronon, in Changes in the Land: Indians, Colonists, and the Ecology of New England, rev. ed. (New York: Hill and Wang, 2003). Ibid., 98–107. 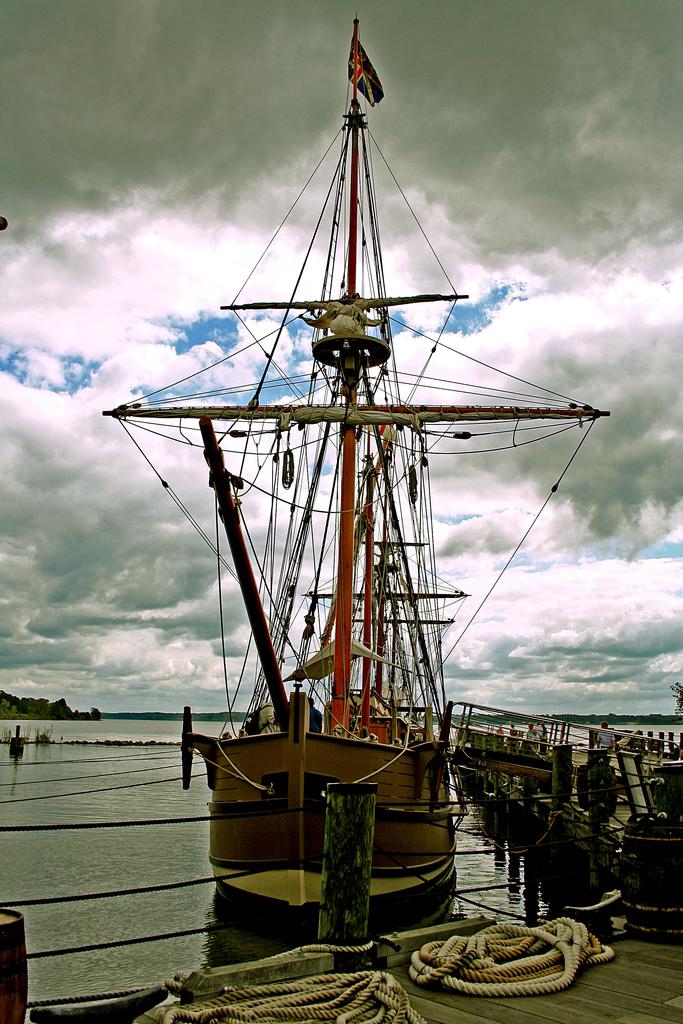 Wooden sailing ships, like this one in Jamestown, need special maintenance to protect them from rot. 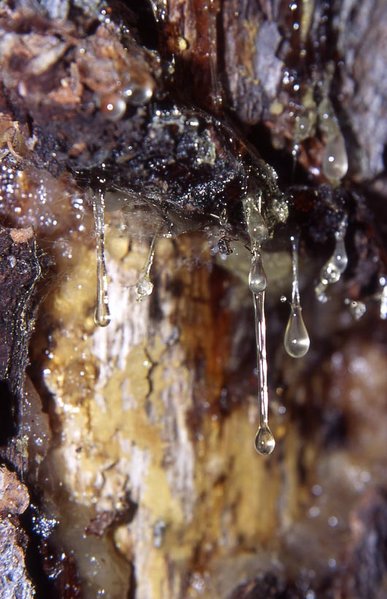 The sap of pine trees is full of resins that help to protect the pine's soft wood and are valuable in manufacturing. 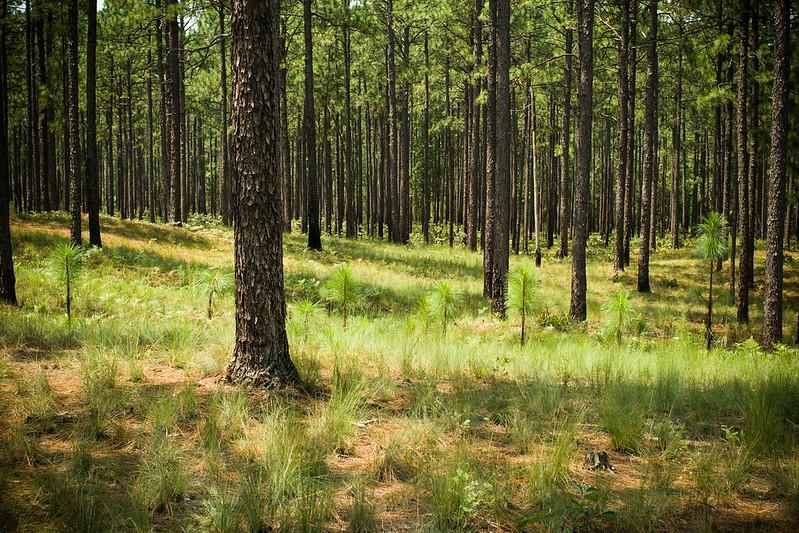