Jim Hunt redefined the office of North Carolina governor in the 20th century. In his unprecedented four terms in office, he helped pass constitutional amendments allowing the governor to run for re-election and veto legislation. A strong proponent of education, he created the Smart Start program and was an early advocate of teaching standards. In 1984, he lost a hard-fought campaign for U.S. Senate against Jesse Helms that remains the most expensive in state history. After leaving office in 2001, he went to work for the Womble Carlyle Sandridge & Rice law firm, and the Institute for Emerging Issues, a Raleigh think tank he helped create.

Jim Hunt is the former four-term Democratic governor of North Carolina and a former lieutenant governor.

His father was a soil conservation officer and his mother was a high school English teacher.

When Hunt was a child, his family lived in Greensboro, Shelby, and Raleigh. In 1941, the Hunts moved to a tobacco and dairy farm in the Rock Ridge community in Wilson County.

As a teenager, he raised cattle, harvested tobacco, and joined the Youth Grange. Hunt graduated from Rock Ridge High School in 1955 as valedictorian of his class.

Hunt went to college to learn about farming, but he got an education in politics.

After high school, he attended N.C. State College (now university) in Raleigh, with the intention of becoming a dairy farmer.

In his spare time, he became involved in politics. He was president of the state chapter of the Future Farmers of America in 1957, and he served an unprecedented two terms as student body president his junior and senior years.

Hunt earned a bachelor's in agricultural education in 1959 and a master's in agricultural economics in 1962. His thesis, an economic analysis of different tobacco production techniques, was used by the U.S. Department of Agriculture to develop a federal program.

Bitten by the politics bug, he decided to study law, enrolling at UNC-Chapel Hill in the fall of 1961. The following year, he studied at George Washington University in Washington, D.C., while working as national college director for the Democratic National Committee.

He courted her through his first two years in college, often hitchhiking 36 hours to visit her family farm in Iowa. In 1958, the couple married at a church in Mingo, Iowa.

They have three daughters, Rebecca, Rachel, and Elizabeth, and a son, James Baxter Hunt III.

A teacher, Carolyn Hunt quit her job to become a full-time first lady after her husband was elected. She later ran unsuccessfully for school board in Wilson County.

In law school, Hunt worked for the campaign of federal judge Richardson Preyer, who ran unsuccessfully for the Democratic gubernatorial nomination.

After failing the bar exam, Hunt moved with his wife and daughter to Nepal, where he worked as an economic adviser for the Ford Foundation for two years.

In 1966, he passed the bar exam on his second try and joined a law practice in Wilson.

In 1968, Hunt was elected president of the Young Democrats Club. In 1970, he was appointed chairman of a commission to review Democratic Party rules by Gov. Bob Scott, gaining statewide exposure to key party members.

After rejecting a run for governor, Hunt ended up with more power as the state's No. 2.

He was elected lieutenant governor in 1972 with the support of former Gov. Terry Sanford and his former campaign manager, Winston-Salem oil distributor Bert Bennett Jr.

With Republican Gov. Jim Holshouser in office, he was the state's highest-ranking Democrat.

As head of the state Senate, he played a key role in pushing legislation through the Democratic-controlled legislature.

Along with Holshouser, he helped pass bills requiring kindergarten and increasing teacher pay.

In 1976, he held a state conference on Sex and Violence on Television, similar to federal hearings then being held by U.S. Sen. Jesse Helms.

At the same time, he traveled the state building a network of political supporters in preparation for an eventual bid for governor.

He ran with the help of a grassroots organization headed by local leaders he called "keys," that was unmatched in the latter part of the 20th century in North Carolina.

In the general election, he beat Republican Dave Flaherty, former secretary of the state Department of Human Resources, winning 65 percent of the vote.

His first act in office was to order high-level appointees to sign a code of ethics that required financial disclosure, a first in North Carolina. He appointed Chapel Hill Mayor Howard Lee as the first black Cabinet secretary in state history.

He later established a reading program in first through third grades, limited class size to 26 students and pushed for the creation of the N.C. School of Science and Mathematics in Durham.Despite intensive lobbying, he twice failed to persuade the legislature to approve the Equal Rights Amendment. However, he led a successful push to amend the state constitution so that governors could serve two terms.

In the 1980 Democratic primary, Hunt defeated former Gov. Bob Scott, a one-time ally who had grown disaffected by some of his conservative stands.

In the general election, he faced Republican state Sen. I. Beverly Lake Jr., a former Democrat who had the backing of the National Congressional Club, a conservative organization that pioneered direct-mail fundraising for U.S. Sen. Jesse Helms.

Hunt won in a landslide, picking up 65 percent of the vote in a year that otherwise trended Republican in North Carolina and across the country.

In his unprecedented second term, he persuaded the legislature to raise the gas tax by three cents to pay for new roads despite tough opposition.

On his third try, he failed to get the Equal Rights Amendment passed in 1982.

As he prepared to leave office in 1984, he campaigned for the U.S. Senate against incumbent Sen. Jesse Helms, then in his second term.

It was characterized as the second most important race in the country, after President Ronald Reagan's face-off with Walter Mondale.

Helms attacked Hunt for supporting legislation to make Martin Luther King Jr.'s birthday a national holiday and for increasing the gas tax, among other things. He also attacked Hunt for being a fence-sitter with the slogan, "Where do you stand, Jim?"

In all, the campaign cost $26.3 million -- making it the most expensive Senate race in Tar Heel history. Helms won by 52 percent.

It was Hunt's first and only political defeat. Afterward, he joined Poyner & Spruill, a Raleigh law firm, and worked on recruiting new businesses to North Carolina.

In a 1987 piece, Washington Post columnist David Broder said that if Hunt had won, he would be "one of the favorites" in the 1988 Democratic presidential primary.

Unlike his previous campaigns, Hunt ran with the help of coalitions of Democratic-leaning interest groups, including organized labor, teachers, and African-American leaders. He also reached out to executives of Charlotte banks and high-tech companies in the Triangle.

In the Democratic primary, he defeated Lacy Thornburg, then the state's attorney general.

In office, he persuaded the legislature to create Smart Start, a public-private partnership that serves children from birth to age 5, and implemented a Work First welfare reform package.

In 1996, he was re-elected over Republican state Rep. Robin Hayes, 56 to 43 percent. Libertarian Scott Yost and Natural Law Party candidate Julia Van Witt received around 1 percent of the vote.

On the same ballot, voters also approved a constitutional amendment -- promoted by Hunt, Hayes, and four previous governors -- giving the governor the power to veto legislation.

Previously, North Carolina had been the only state in the country without the veto. Despite his work on the amendment, Hunt never vetoed any legislation.

Before leaving office, he helped create Centennial Campus, a research park at N.C. State, from land that had been a part of the Dorothea Dix state mental hospital.

In 2000, it was estimated that he appointed at least 12,000 people to state boards and commissions.

Though he no longer holds elected office, Hunt remains influential in state politics.

After leaving office in January of 2001, he went to work for the Raleigh office of Womble Carlyle Sandridge & Rice, a Winston-Salem-based law firm. He uses his office in the Wachovia Building downtown to network with business and political leaders.

Hunt often meets with his successor, Gov. Mike Easley, to give advice and ideas. He also has ties to the two Democratic candidates for governor in 2008: State Treasurer Richard Moore served as secretary of crime control and public safety under him, while Lt. Gov. Beverly Perdue was a key liaison in the Senate.

Political observers speculate that he would have served as education secretary if either Al Gore or Jim Kerry had won their presidential campaigns.

He still works with the Institute for Emerging Issues, a think tank based at N.C. State which grew out of an annual conference he started in 1985.

The institute is currently in the miple of a five-year effort to reform the state tax code.

In 2003, he started the James B. Hunt Jr. Institute for Educational Leadership and Policy, which holds conferences in Chapel Hill for governors, legislators, and educators.

In 2006, the state Democratic Party began an annual fundraiser, the Sanford-Hunt Dinner, which is held in conjunction with the state convention. The event is named for Hunt and former Democratic Gov. Terry Sanford.

By Ryan Teague Beckwith, December 26, 2007. Reprinted by permission of The News & Observer of Raleigh, North Carolina. 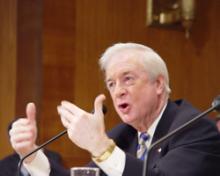