In 1946, the United States Supreme Court declared that the racial segregation of passengers on interstate buses was an “undue burden on interstate commerce” and could no longer be enforced. Encouraged by the decision, but dubious as to whether it would be followed, the Congress of Racial Equality sponsored a two week “Journey of Reconciliation” through the upper South to test the effectiveness of the Court’s decision.

In April 1947, sixteen people — eight African Americans and eight whites — set off on a tour of cities in Virginia, North Carolina, Tennessee, and Kentucky. They traveled by bus with the express purpose of challenging existing Jim Crow laws.

The freedom riders entered North Carolina on April 11 and made stops in Durham, Raleigh, Chapel Hill, Greensboro, and Winston-Salem. Bus drivers and police officers challenged the passengers at nearly every stop, resulting in arrests in Asheville and Chapel Hill.

One of the riders arrested in Chapel Hill was Bayard Rustin, who was on his way to becoming a prominent Civil Rights leader and is now perhaps best known as the organizer of the 1963 march on Washington where an estimated quarter of a million people gathered to hear Martin Luther King Jr.’s “I Have a Dream” speech.

Rustin was sitting in the front seat of a Trailways bus in Chapel Hill on April 13, and was ordered to move to the back. When he refused, he and the white man sitting next to him were arrested on charges of disorderly conduct and for refusing to obey the order of the bus driver. Two more riders were arrested and all four were released on bond and taken to the home of Charles Jones, a local Presbyterian minister who agreed to host the travelers for the night. Before they could leave, a taxi driver assaulted one of the freedom riders, striking James Peck, a white man, in the head. Two cars filled with angry men followed the group back to Rev. Jones’s house where they made several threats before leaving. Wary of more violence if they stayed in Chapel Hill, Rustin and the others left for Greensboro that night.

Despite the U.S. Supreme Court’s 1946 decision overturning segregation on interstate carriers, the arrests of the freedom riders were upheld by the North Carolina Supreme Court. The North Carolina Court argued that because the passengers were not traveling outside of the state that day, they were not interstate travelers and thus the Supreme Court decision did not apply to them. Bayard Rustin spent twenty-two days on a prison chain gang in Roxboro.

George Houser and Bayard Rustin. We Challenged Jim Crow!: A Report on the Journey of Reconciliation, April 9-23, 1947. Congress of Racial Equality, [1947]. 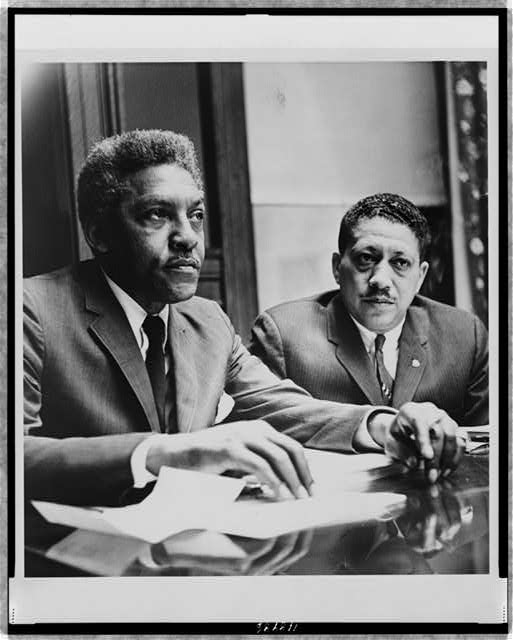 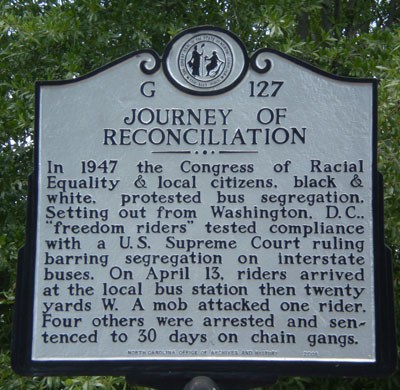 Located in Chapel Hill, NC, it marks the location where protesters on the bus journey were attacked and arrested.

Fighting Jim Crow with the Journey of Reconciliation Lesson Plan