It was not so long ago that going to a bootblack was an extravagance -- fool-and-his-money affair, or diversion of improvident traveling salesmen. Then shines were five cents. To-day they are ten, and we take them as a matter of course.

During the past several months I have traveled from coast to coast and from Fargo, N. D., to El Paso, Tex. through all the states and in all the cities and many of the towns. I did not find a town of over two thousand -- and I doubt if there is one -- where Jeanette or Lucille or Marie is not running a "beauty parlor" or a "beauty shoppe" and doing fairly well. In Sioux Falls, S. D., I counted three in two blocks and Sioux Falls is supposed to be broke.

Polishing shoes and polishing hands and faces have become great industries, earning many millions a year. In a small Middle West city I saw, in the wholesale district, a store devoted entirely to selling beauty-parlor aprons. Every fair-sized city has its "beauty school" and also you can learn by mail.

But why bother about such trivialities as shining shoes and steaming faces -- does not this just go to show that the males are growing laxer and the females more vain? It means a lot more.

It means more than the figures any statistician might assemble -- it means that we to-day are rich enough to go in for luxuries not just in the big cities but everywhere in our land. It means that we are all rich in a way, for there are not enough of the really rich to keep so many places going.

Consider the flapper and how she grows. I was not on a flapper hunt; my primary purpose was to see what was going on in this country. I had heard many doleful tales -- we were riding to a fall; our people were not working but demanding extravagant wages for going through the motions of work; money was being spent and not saved; numerous homely virtues of our forefathers had been scrapped; we were all in hock for automobiles, radios, diamond rings, and the thousand and one knick knacks that you can buy for a dollar down and a dollar when they catch you; and the country had to get back to normalcy or perish. I have not yet been able to discover exactly what normalcy is, but as far as I can make out it is intimately connected with 1913 and Canton flannel nighties.

I was told that people were skimping on necessities in order to indulge in luxuries; that retail dealers were nervous and bought only from hand to mouth, because they could not know from one day to the next what their business would be; that the consumption of the country was far below productive capacity, and that we simply had to have a drastic readjustment.

I talked with bankers, business men and farmers, and also I kept my eyes and my ears open, and I reached the conclusion that our only trouble is that we have not yet awakened to what this country really is -- what has happened, what is happening or what can happen.

We have been measuring it with old measures. We have been thinking, "For the poor always ye have with you." We cannot comprehend that to America has come a new order of things -- that dire poverty is as rare as smallpox and as obsolete; that we are in the midst of a great experiment the like of which the world has never even dreamed of, and that it lies with us to carry on or to funk.

Our national machine is wondrously strong. It hit many a wicked bump in the three years from 1920 to 1923, and those bumps, which would have smashed any other machine, merely tuned ours up -- as one tunes up a new motor car....

But we have built up our machine by good management which pays high wages. We have an enormous stock of good managers. We have only a few bad ones and they are principally in the textiles and in coal. But over and above all and more powerful than anything is this our people have the will to be prosperous. That is the great fact which shows out all over the country and it is nowhere more evident than in the flapper....

The real flapper is what used to be known as the "poor working girl" -- who, if the accounts are true, dragged herself off day by day to work until someone came along and married her. Sometimes she was a Cinderella, but more often she graduated a household drudge.

The flapper of to-day is a very different person. In dress she is as standardized as a chain hotel and incidentally hotel bedrooms are becoming so alike that you can remember what city you are in only by tacking a local newspaper on the wall. Barring size, flappers at a hundred feet are as standardized as Ford cars. As far as dress goes, they are a simplified national product.... There is no distinction between the town flapper and the farm flapper -- the automobile has wiped them out. There is no distinction in the cut of clothing between the rich flapper and the poor flapper -- national advertising has attended to that. The rich flapper has better clothing than the poor one, but a block away they are all flappers.

The outstanding characteristic of the flapper is not her uniform but her independence and her will to be prosperous.

She is no clinging vine. I was in the office of the president of a good-sized bank on the Pacific Coast when his daughter and several of her high-school friends burst in -- flappers all. We got to talking and I found that these girls, not one of whom had any need to work, all intended to find jobs during the summer, and they thought that most of the girls in school would do the same. They all wanted to know how to make a living -- and to have a good time doing it. That seems to be common everywhere.

Girls will no longer marry men who can merely support them they can support themselves better than can many of the men of their own age. They have awakened to the fact that the "superior sex" stuff is all bunk. They will not meekly bow their heads to the valiant man who roars, " Where is that dress I bought you three years ago?"...

The flapper wants to look well, and she is willing to provide for herself. Employers everywhere told me that the women were doing better work than the men, and they do seem to be mentally more alert. All of which means that the man who marries the modern flapper has got to provide for her -- she will not be merely an unpaid servant. And this in turn means that the men have got to work -- than which nothing better could happen for the country. The flapper is to-day our most important national institution....

extravagance -- fool-and-his-money affair, or diversion of improvident traveling salesmen. Then shines were five cents. To-day they are ten, and we take them as a matter of course.

During the past several months I have traveled from coast to coast and from Fargo, N. D., to El Paso, Tex. through all the states and in all the cities and many of the towns. I did not find a town of over two thousand -- and I doubt if there is one -- where Jeanette or Lucille or Marie is not running a "beauty parlor" or a "beauty shoppe" and doing fairly well." data-share-imageurl=""> 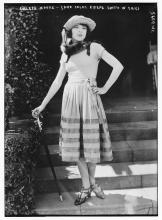 The movie star Colleen Moore was the first actress to cut her hair short and dress in the style of a "flapper."