North Carolina as a Civil War Battlefield, May 1862–November 1864

While there were numerous small skirmishes in eastern North Carolina throughout the remainder of the war, no major Union military assaults took place until the first Battle of Fort Fisher on Christmas of 1864. However, there were some Union pushes into the interior of the state and some offensive actions by the Confederates as well. Foster's Raid and Potter's Raid highlight the Union efforts, while important Confederate actions were the repeated attempts to dislodge the Union from New Bern and the recapture of the town of Plymouth.

In December 1862, General John Foster, commander at New Bern, organized a raid to Goldsboro to burn the Wilmington and Weldon Railroad bridge there. Foster's force of 10,000 infantry, 640 cavalry, and 40 artillery pieces left New Bern on December 11. On December 14, Foster's army engaged the Confederates just outside of Kinston in the Battle of Southwest Creek (or the first Battle of Kinston). Outnumbered, the Confederates withdrew and Foster continued his march. The Union forces again encountered Confederate resistance on December 15 and 16 at Whitehall (now known as Seven Springs). The Confederates were at work building the ironclad ram CSS Neuse. Though the hull was hit by several shot and shell, Union attempts to completely destroy the unfinished vessel were unsuccessful. Following the two days of fighting, Foster continued on toward his objective. Reaching the railroad bridge on December 17, Foster's forces battled Confederates and eventually were able to set fire to the bridge. Foster ordered his troops from the field of battle and returned to New Bern, calling his raid “a perfect success.” Unfortunately for Foster, the damage to the bridge was only superficial and the Confederates managed to rebuild it within a few weeks. Later the following summer, the Neuse floated downriver to Kinston where it was outfitted with engines, cannons and iron plating.

Foster’s chief of staff, General Edward Potter, led another expedition into the interior in mid-July 1863. His force of cavalry left New Bern, and on July 19, his men arrived in Greenville. Finding no Confederate resistance, he looted the town and burned the Tar River Bridge. Continuing on, Potter split his force, sending a detachment to Rocky Mount while he led the rest of the troops to Tarboro. On July 20, Potter’s men reached Tarboro and destroyed a Confederate ironclad under construction as well as other military and civilian property. Upon learning that the Confederates were closing in on him, he decided to return to the safety of New Bern on July 21. Potter reunited with the detachment he had sent to Rocky Mount, and they reported having destroyed a great deal of property as well. The pursuing Confederates finally caught up with Potter’s force and fought a two-day long running skirmish until the Union soldiers reached New Bern on July 23. Potter’s Raid was a tremendous success as it cut Confederate lines of communication, destroyed vast quantities of supplies and an ironclad, and brought back 100 Confederate prisoners, 300 horses or mules, and 300 “contrabands” (formerly enslaved people that had fled from their enslavers to the protection of the Union lines).

The Confederates developed plans to fight back and take offensive action of their own. There were a number of attempts to retake New Bern and expel the Union forces from their stronghold. The first such attempt was made in late January and early February 1864. General George Pickett was sent to eastern North Carolina with approximately 13,000 men and a cooperating naval force under Commander John Taylor Wood. The army was split into three columns, each to attack the city from a different vantage point, while the 250-man naval detachment descended the Neuse River from Kinston. It was hoped that the sailors and marines could capture one or more Union gunboats in the river and use them to offer support for the army’s operation. Unfortunately, due to Pickett’s poor leadership and the failure of two of his subordinates to carry out their duties, the attack on New Bern failed. Only General Robert F. Hoke, a North Carolinian, had executed his part of the plan. The naval detachment was much more successful, as Wood’s expedition captured and burned the USS Underwriter before heading back to Kinston.

Undaunted by the setback at New Bern, Hoke made plans to recapture the town of Plymouth on the Roanoke River and returned to North Carolina in April 1864. Also planned as a joint army-navy expedition, the naval element consisted of the ironclad ram CSS Albemarle which had been built by the Confederates at Edwards Ferry. Nicknamed the “Cornfield Ironclad” because it was literally built in a cornfield, the Albemarle was destined to play a major role in the assault on the Union stronghold at Plymouth. Skirmishing outside of the town began on April 17. Arriving on April 19, the Albemarle encountered two Union gunboats, the USS Miami and USS Southfield. In the ensuing battle, the Confederate ironclad rammed the Southfield and sent it to the river bottom and Commander Charles Flusser was killed on board the Miami when an artillery round bounced off of the Albemarle’s iron casemate and back onto his ship, exploding near him. Hoke’s men went on the offensive as the Albemarle shelled the Union position from the river. On April 20, completely surrounded, General W.H. Wessells surrendered to the Confederates. The defeat at Plymouth forced the Union to evacuate nearby Washington on April 27, but not before sacking the town.

The success at Plymouth launched Hoke and his men toward their next target, New Bern. Hoke had been disappointed at the failure of the operation there a few months earlier and was determined not to fail again. This time he enlisted the aid of another ironclad ram, the CSS Neuse, almost completed at Kinston. Hoke also requested the assistance of the Albemarle. The Union fleet was waiting for the Confederate ironclad when it emerged into the Albemarle Sound. The Albemarle fought well, but sustained enough damage to force it back upriver to Plymouth for repair. The Neuse encountered difficulty as well, running aground on a sandbar only a half-mile from its dock. Unable to get free, the Neuse would be of no use to Hoke in his assault. Skirmishing around New Bern began on May 4 and continued on May 5. Hoke’s attack, though promising, was halted by an urgent message from Richmond, ordering his return to Petersburg to help meet a threat from General U.S. Grant. After Hoke’s withdrawal, New Bern never faced another Confederate assault.

The Confederate success at Plymouth was short-lived. On the night of October 27, 1864, the CSS Albemarle was sunk at its dock during a daring raid led by naval Lieutenant William B. Cushing. As a result, Plymouth was retaken by the Union on October 31 and Washington shortly thereafter, reestablishing Union dominance in the area. 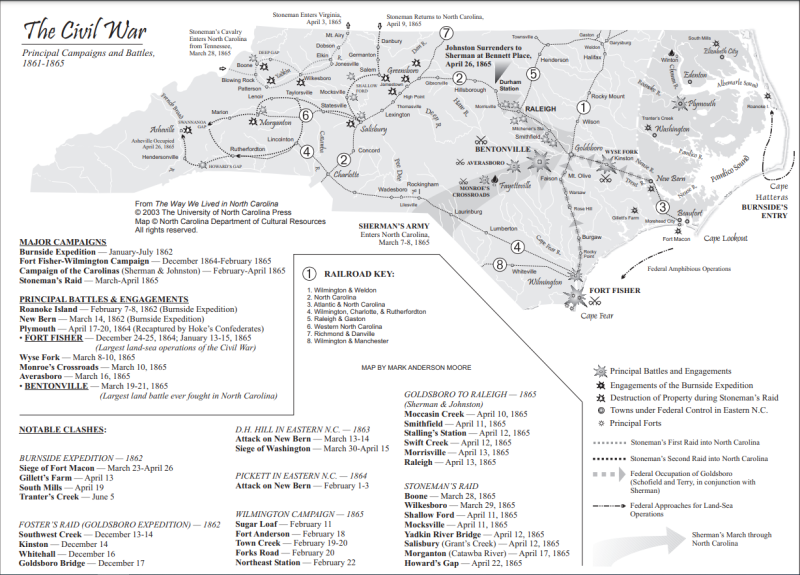 This map of North Carolina reflects notable engagements, dates, railroads, and towns during the Civil War. From the 2003 publication of The Way We Lived in North Carolina.

North Carolina Civil War Maps from the Library of Congress