The war in North Africa and Europe

Soon after the United States entered the war, the United States, Britain, and the Soviet Union (at war with Germany since June 22, 1941) decided that their primary military effort was to be focused in Europe.

Throughout 1942, British and German forces fought inconclusive back-and-forth battles across Libya and Egypt for control of the Suez Canal. But on October 23, British forces commanded by General Sir Bernard Montgomery struck at the Germans from El Alamein. Equipped with a thousand tanks, many made in America, they defeated General Erwin Rommel’s army in a grinding two-week campaign. On November 7, American and British armed forces landed in French North Africa. Squeezed between forces advancing from east and west, the Germans were pushed back and, after fierce resistance, surrendered in May 1943.

The year 1942 was also the turning point on the Eastern Front. The Soviet Union, suffering immense losses, stopped the Nazi invasion at the gates of Leningrad and Moscow. In the winter of 1942-43, the Red Army defeated the Germans at Stalingrad (Volgograd) and began the long offensive that would take them to Berlin in 1945.

In July 1943 British and American forces invaded Sicily and won control of the island in a month. During that time, Benito Mussolini fell from power in Italy. His successors began negotiations with the Allies and surrendered immediately after the invasion of the Italian mainland in September. However, the German Army had by then taken control of the peninsula. The fight against Nazi forces in Italy was bitter and protracted. Rome was not liberated until June 4, 1944. As the Allies slowly moved north, they built airfields from which they made devastating air raids against railroads, factories, and weapon emplacements in southern Germany and central Europe, including the oil installations at Ploesti, Romania.

Late in 1943 the Allies, after much debate over strategy, decided to open a front in France to compel the Germans to divert far larger forces from the Soviet Union.

U.S. General Dwight D. Eisenhower was appointed Supreme Commander of Allied Forces in Europe. After immense preparations, on June 6, 1944, a U.S., British, and Canadian invasion army, protected by a greatly superior air force, landed on five beaches in Normandy. With the beachheads established after heavy fighting, more troops poured in, and pushed the Germans back in one bloody engagement after another. On August 25 Paris was liberated.

The Allied offensive stalled that fall, then suffered a setback in eastern Belgium during the winter, but in March, the Americans and British were across the Rhine and the Russians advancing irresistibly from the East. On May 7, Germany surrendered unconditionally.

U.S. troops were forced to surrender in the Philippines in early 1942, but the Americans rallied in the following months. General James “Jimmy” Doolittle led U.S. Army bombers on a raid over Tokyo in April; it had little actual military significance, but gave Americans an immense psychological boost.

In May, at the Battle of the Coral Sea – the first naval engagement in history in which all the fighting was done by carrier-based planes – a Japanese naval invasion fleet sent to strike at southern New Guinea and Australia was turned back by a U.S. task force in a close battle. A few weeks later, the naval Battle of Midway in the central Pacific resulted in the first major defeat of the Japanese Navy, which lost four aircraft carriers. Ending the Japanese advance across the central Pacific, Midway was the turning point.

Other battles also contributed to Allied success. The six-month land and sea battle for the island of Guadalcanal (August 1942-February 1943) was the first major U.S. ground victory in the Pacific. For most of the next two years, American and Australian troops fought their way northward from the South Pacific and westward from the Central Pacific, capturing the Solomons, the Gilberts, the Marshalls, and the Marianas in a series of amphibious assaults.

The politics of war

Allied military efforts were accompanied by a series of important international meetings on the political objectives of the war. In January 1943 at Casablanca, Morocco, an Anglo-American conference decided that no peace would be concluded with the Axis and its Balkan satellites except on the basis of “unconditional surrender.” This term, insisted upon by Roosevelt, sought to assure the people of all the fighting nations that no separate peace negotiations would be carried on with representatives of Fascism and Nazism and there would be no compromise of the war’s idealistic objectives. Axis propagandists, of course, used it to assert that the Allies were engaged in a war of extermination.

At Cairo, in November 1943, Roosevelt and Churchill met with Nationalist Chinese leader Chiang Kai-shek to agree on terms for Japan, including the relinquishment of gains from past aggression. At Tehran, shortly afterward, Roosevelt, Churchill, and Soviet leader Joseph Stalin made basic agreements on the postwar occupation of Germany and the establishment of a new international organization, the United Nations.

In February 1945, the three Allied leaders met again at Yalta (now in Ukraine), with victory seemingly secure. There, the Soviet Union secretly agreed to enter the war against Japan three months after the surrender of Germany. In return, the USSR would gain effective control of Manchuria and receive the Japanese Kurile Islands as well as the southern half of Sakhalin Island. The eastern boundary of Poland was set roughly at the Curzon line of 1919, thus giving the USSR half its prewar territory. Discussion of reparations to be collected from Germany – payment demanded by Stalin and opposed by Roosevelt and Churchill – was inconclusive. Specific arrangements were made concerning Allied occupation in Germany and the trial and punishment of war criminals. Also at Yalta it was agreed that the great powers in the Security Council of the proposed United Nations should have the right of veto in matters affecting their security.

Two months after his return from Yalta, Franklin Roosevelt died of a cerebral hemorrhage while vacationing in Georgia. Few figures in U.S. history have been so deeply mourned, and for a time the American people suffered from a numbing sense of irreparable loss. Vice President Harry Truman, former senator from Missouri, succeeded him.

War, victory, and the bomb

The final battles in the Pacific were among the war’s bloodiest. In June 1944, the Battle of the Philippine Sea effectively destroyed Japanese naval air power, forcing the resignation of Japanese Prime Minister Tojo. General Douglas MacArthur – who had reluctantly left the Philippines two years before to escape Japanese capture – returned to the islands in October. The accompanying Battle of Leyte Gulf, the largest naval engagement ever fought, was the final decisive defeat of the Japanese Navy. By February 1945, U.S. forces had taken Manila.

Next, the United States set its sight on the strategic island of Iwo Jima in the Bonin Islands, about halfway between the Marianas and Japan. The Japanese, trained to die fighting for the Emperor, made suicidal use of natural caves and rocky terrain. U.S. forces took the island by mid-March, but not before losing the lives of some 6,000 U.S. Marines. Nearly all the Japanese defenders perished. By now the United States was undertaking extensive air attacks on Japanese shipping and airfields and wave after wave of incendiary bombing attacks against Japanese cities.

At Okinawa (April 1-June 21, 1945), the Americans met even fiercer resistance. With few of the defenders surrendering, the U.S. Army and Marines were forced to wage a war of annihilation. Waves of Kamikaze suicide planes pounded the offshore Allied fleet, inflicting more damage than at Leyte Gulf. Japan lost 90-100,000 troops and probably as many Okinawian civilians. U.S. losses were more than 11,000 killed and nearly 34,000 wounded. Most Americans saw the fighting as a preview of what they would face in a planned invasion of Japan.

The heads of the U.S., British, and Soviet governments met at Potsdam, a suburb outside Berlin, from July 17 to August 2, 1945, to discuss operations against Japan, the peace settlement in Europe, and a policy for the future of Germany. Perhaps presaging the coming end of the alliance, they had no trouble on vague matters of principle or the practical issues of military occupation, but reached no agreement on many tangible issues, including reparations.

The day before the Potsdam Conference began, U.S. nuclear scientists engaged in the secret Manhattan Project exploded an atomic bomb near Alamogordo, New Mexico. The test was the culmination of three years of intensive research in laboratories across the United States. It lay behind the Potsdam Declaration, issued on July 26 by the United States and Britain, promising that Japan would neither be destroyed nor enslaved if it surrendered. If Japan continued the war, however, it would meet “prompt and utter destruction.” President Truman, calculating that an atomic bomb might be used to gain Japan’s surrender more quickly and with fewer casualties than an invasion of the mainland, ordered that the bomb be used if the Japanese did not surrender by August 3.

A committee of U.S. military and political officials and scientists had considered the question of targets for the new weapon. Secretary of War Henry L. Stimson argued successfully that Kyoto, Japan’s ancient capital and a repository of many national and religious treasures, be taken out of consideration. Hiroshima, a center of war industries and military operations, became the first objective.

On August 6, a U.S. plane, the Enola Gay, dropped an atomic bomb on the city of Hiroshima. On August 9, a second atomic bomb was dropped, this time on Nagasaki. The bombs destroyed large sections of both cities, with massive loss of life. On August 8, the USSR declared war on Japan and attacked Japanese forces in Manchuria. On August 14, Japan agreed to the terms set at Potsdam. On September 2, 1945, Japan formally surrendered. Americans were relieved that the bomb hastened the end of the war. The realization of the full implications of nuclear weapons’ awesome destructiveness would come later.

Within a month, on October 24, the United Nations came into existence following the meeting of representatives of 50 nations in San Francisco, California. The constitution they drafted outlined a world organization in which international differences could be discussed peacefully and common cause made against hunger and disease. In contrast to its rejection of U.S. membership in the League of Nations after World War I, the U.S. Senate promptly ratified the U.N. Charter by an 89 to 2 vote. This action confirmed the end of the spirit of isolationism as a dominating element in American foreign policy.

In November 1945 at Nuremberg, Germany, the criminal trials of 22 Nazi leaders, provided for at Potsdam, took place. Before a group of distinguished jurists from Britain, France, the Soviet Union, and the United States, the Nazis were accused not only of plotting and waging aggressive war but also of violating the laws of war and of humanity in the systematic genocide, known as the Holocaust, of European Jews and other peoples. The trials lasted more than 10 months. Twenty-two defendants were convicted, 12 of them sentenced to death. Similar proceedings would be held against Japanese war leaders.

The Nuremberg Trials
from the National World War II Museum 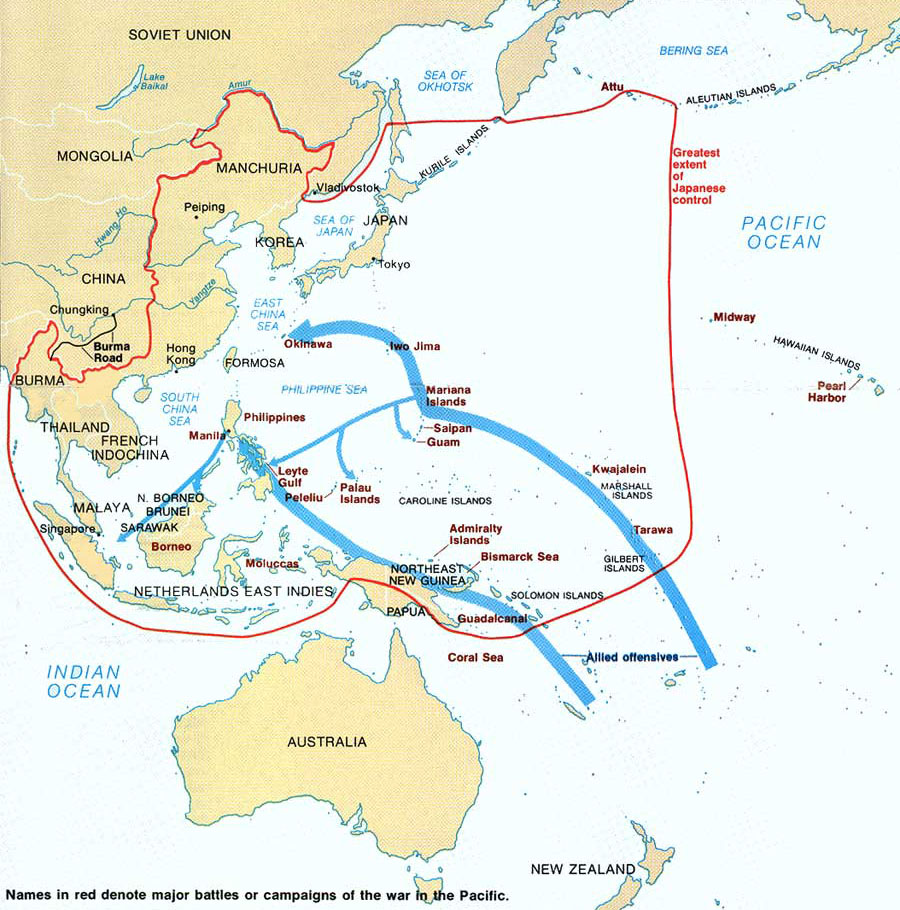 Surrender of Japan (1945)
from the National Archives

The Atomic Bomb and the End of World War II

from the National Security Archive

The United States in World War II: "The Proper Application of Overwhelming Force"