Coastal Erosion and the Ban on Hard Structures

North Carolina's sandy coast is one of the state's greatest tourist attractions, and also one of its frequent sources of controversy. The 301 miles of coastline in the east have been the site of an ongoing struggle between stable structures created by humans and the dynamic forces of nature, between property rights and thousands of years of geology. A 1985 rule designed to preserve the beaches in their natural state enjoys the support of coastal scientists but threatens the investments of home-owners and developers.

Some of the factors that draw people to the beach -- namely, the wind and waves -- contribute to a constantly changing coastline that washes away in one area as it builds up in another. These natural processes made the North Carolina coast the way it is, and they continue to shape it.

Part of this process of erosion and accretion is easy to observe on a typical day at the beach: When waves crash on the shore, they don't break in straight lines parallel to the beach. Instead, they break diagonally. The wind and current patterns that influence the diagonal movement of the waves ensure non-stop sand movement along the coast.

Before a wave breaks, it picks up sand and other sediment from the ocean floor. When the wave breaks on the shore, the underwater sediment is washed up onto the beach diagonally, at the angle in which the wave is moving. As the wave washes back out to the ocean, gravity draws it straight down the beach perpendicular to the shoreline, carrying the sediment with it. This means that ocean water, and the sediment it carries, moves down the beach in a repetitive zig-zag pattern. Over and over, sand and sediment is picked up in one location and deposited downstream on the beach. In this way, sand gradually erodes away in one place and accumulates further down the beach.

On the North Carolina coast this pattern -- known as longshore drift or longshore current -- happens in a north-to-south direction. On the barrier islands that line the North Carolina coast, sand that erodes away from the northern end of an island accumulates at the island's southern end. The process can happen quite rapidly, with inlets sometimes migrating south at a rate of one foot per day.

In addition to this north-to-south migration of beach sand, the barrier islands -- which include the Outer Banks and the Core Banks -- are continually migrating west toward land. The islands are subject to winds, rising sea levels, and strong storms that gradually push sand from the ocean side of the islands to the land side.

Despite the constant forces moving the sand, the barrier islands continue to exist in a state of dynamic equilibrium, fed by sediment from inland rivers like the Cape Fear, Neuse, Roanoke, and Tar. These rivers flow out toward the sea, carrying sediment that replenishes barrier island sand and water that maintains inlets. It's an ecological system kept in balance by a complicated assortment of forces. That balance is further complicated when people are factored into the equation.

While longshore drift ensures the long-term stability of the coast, it also makes the beach an unpredictable place to build houses. A beach home built far from the water can eventually wind up with waves lapping at its door, a victim of shifting sands. But with the rapid rise of population in the state has come increasing pressure to build homes along the coast.

One solution that has been enacted in other coastal states is the construction of hard structures like jetties, groins, and sea walls designed to hold beach sand in place:

While hard structures can protect beach homes and other buildings threatened by erosion, they've been criticized for causing increased erosion further down the beach. Both jetties and groins, for example, act like dams to physically stop the movement of sand. They work by preventing longshore drift from washing sediment down the coast. As a result, they cause a buildup of sand on the side protected by the structure -- which is precisely what they're intended to do. But areas further downstream on the coast are cut off from natural longshore drift by these barrier-like structures. No longer replenished by the sand that usually feeds them, these areas experience worsened erosion.

Historically, North Carolina has tried to avoid the problems than can be brought on by the use of hard structures to control erosion. In 1985, the North Carolina Coastal Resources Commission (CRC), a policy-making body for the coastal management program, studied the effects of hard structures on beaches in other states. The CRC concluded that the potential negative effects of such structures could cause irreversible damage to North Carolina's beaches. As a result, the CRC recommended banning the construction of hard structures to protect buildings at the coast. The ban made exceptions for protecting historic buildings that could not be moved and for maintaining important waterways needed for navigation.

Throughout the lifetime of the ban, though, it has regularly come under fire. People who own property on the beach object to the law when they find their homes and businesses threatened by the steadily approaching ocean. In many cases, these property owners built their homes far from the water in compliance with state laws. But hurricanes and other strong storms can make sudden, drastic changes to the width of a beach, and slower natural processes like longshore drift gradually change the coastline over time. Because of the ban on hard structures, coastal property owners find themselves with no options for protecting their homes and businesses when the ocean inches closer.

The role of tourist dollars also feeds the controversy over the hard structures ban. Opponents of the ban argue that it damages local economies on the coast by discouraging people from building at the beach -- because fewer home-owners means fewer people spending money. The law's supporters counter that the existence of the ban has preserved the beach's natural beauty, which is the reason so many tourists return to North Carolina year after year.

In 2007, a group of more than 40 coastal geologists issued a statement urging North Carolina to continue its policy of banning hard structures. The scientists argued that without it, the state's coastline would suffer from worsening erosion up and down the coast.

The case for terminal groins

A Senate Bill proposed in 2009 would permit an exception to the state ban on hard structures. SB 832 proposed allowing the construction of "terminal groins," a type of groin typically placed at inlets at the end of barrier islands. These low-slung barriers made of rock or steel are designed to protect property near natural inlets, which are particularly susceptible to beachfront changes.

Proponents of the structures argue that terminal groins are "passive" structures that trap some sand but let the rest wash over them. But scientists maintain that even terminal groins would inevitably deprive downstream beaches of sand, and that changing the law to allow one type of structure would simply make it easier for future laws allowing more damaging structures.

With more and more people flocking to the beach every year, the challenge of effectively balancing the rights of property owners and the ecological stability of North Carolina's beaches remains a pressing issue for state lawmakers. 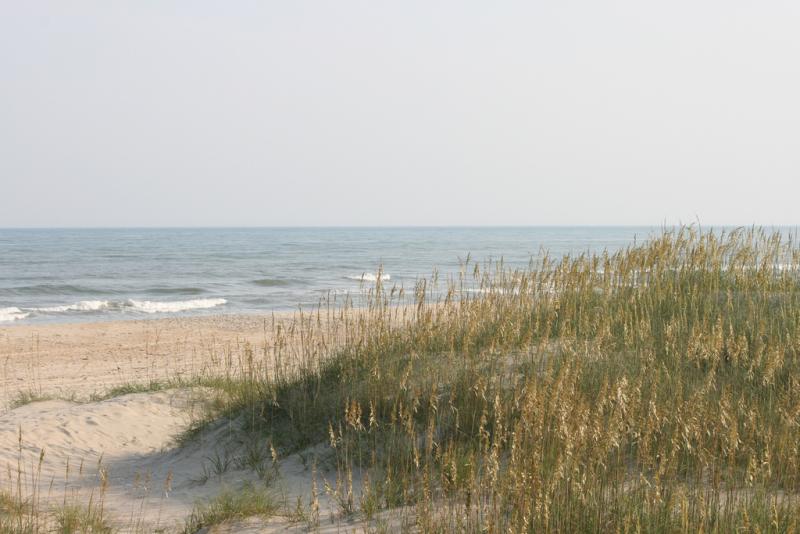 Ocracoke, in the Outer Banks, was named America's Best Beach in 2007 by a coastal ecology professor at Florida International University.

This animation illustrates how sand moves down the beach in a zig-zag pattern as a result of longshore drift. 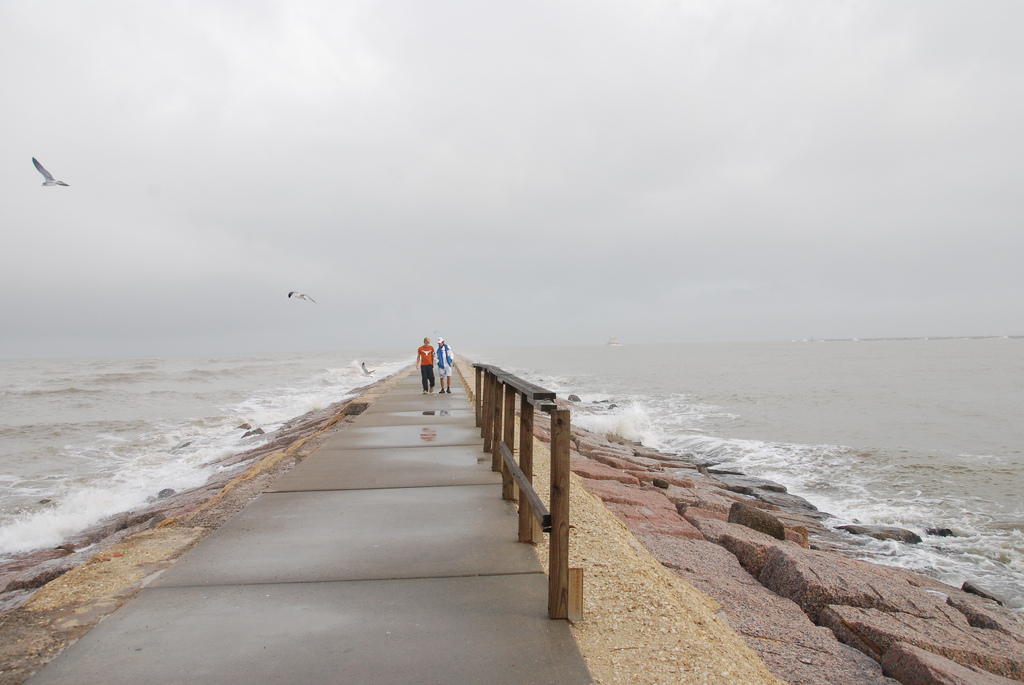 A jetty at Surfside Beach, Texas. 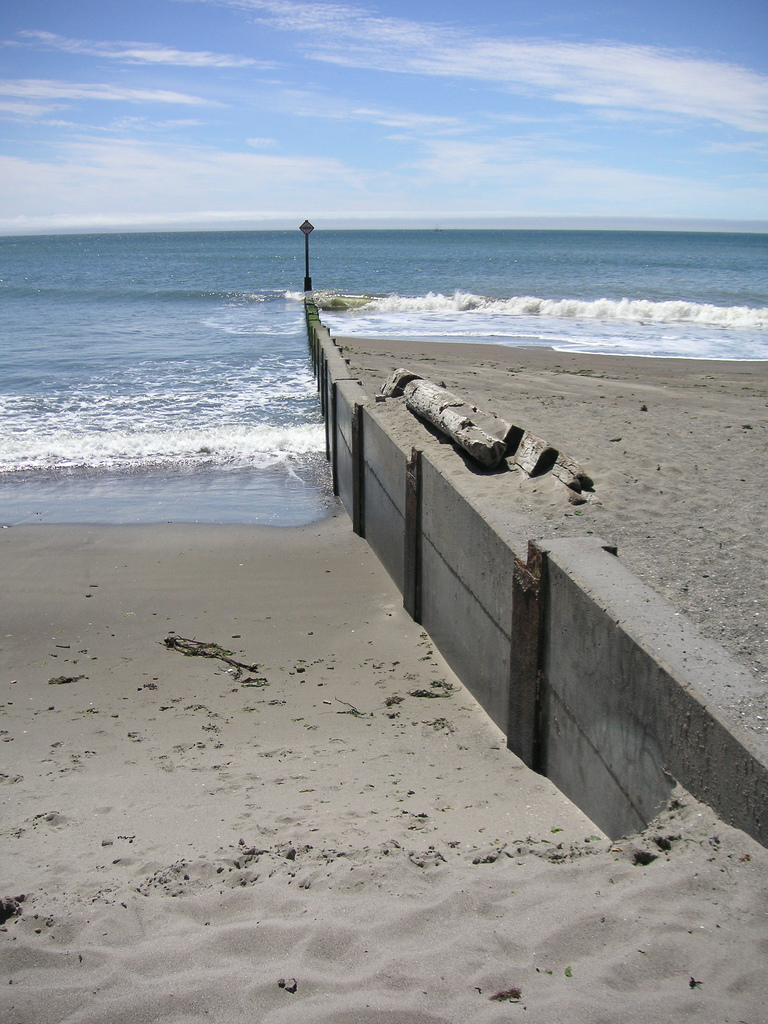 A groin in Bolinas, California. 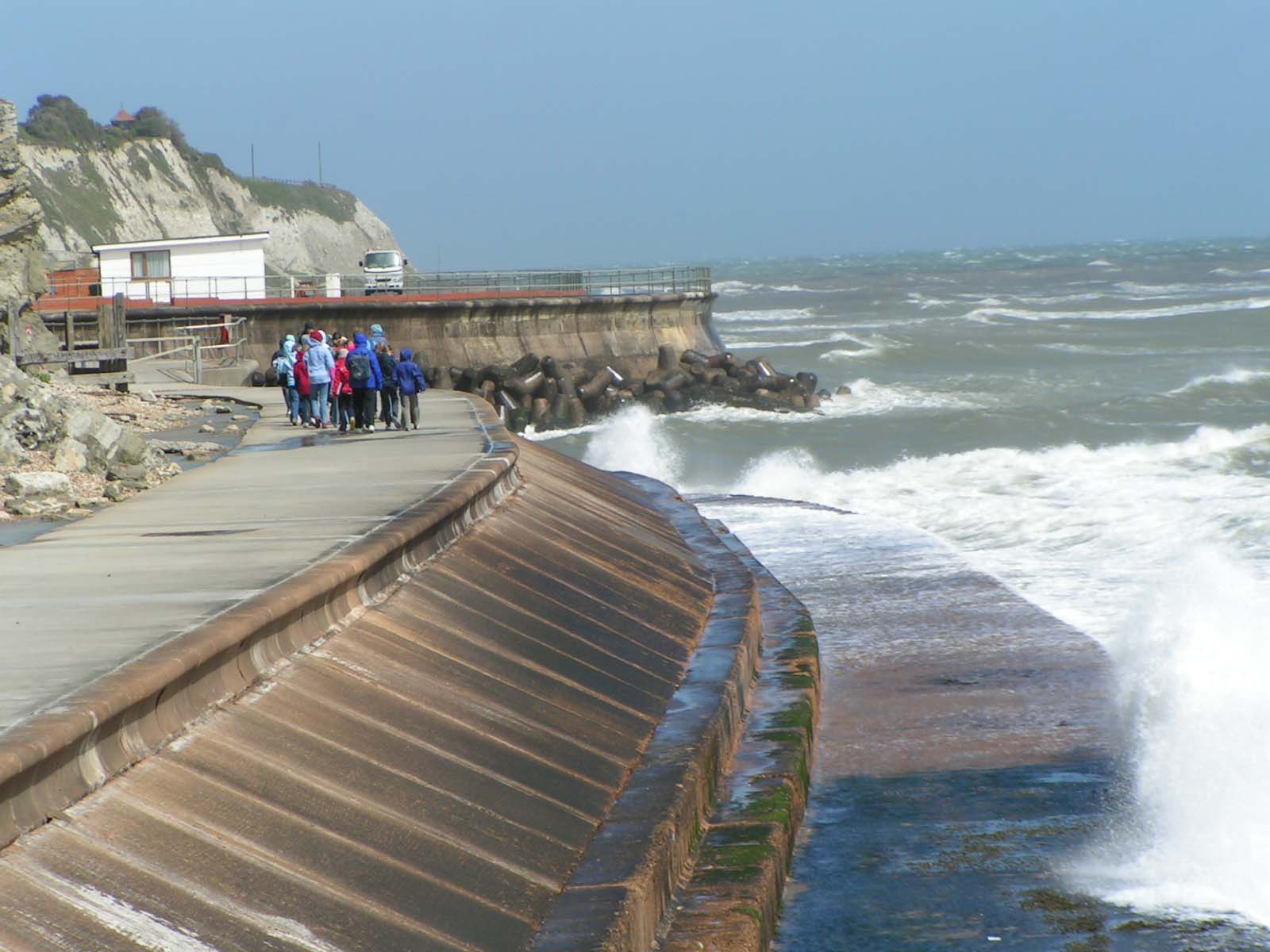 A sea wall in Isle of Wight, UK.