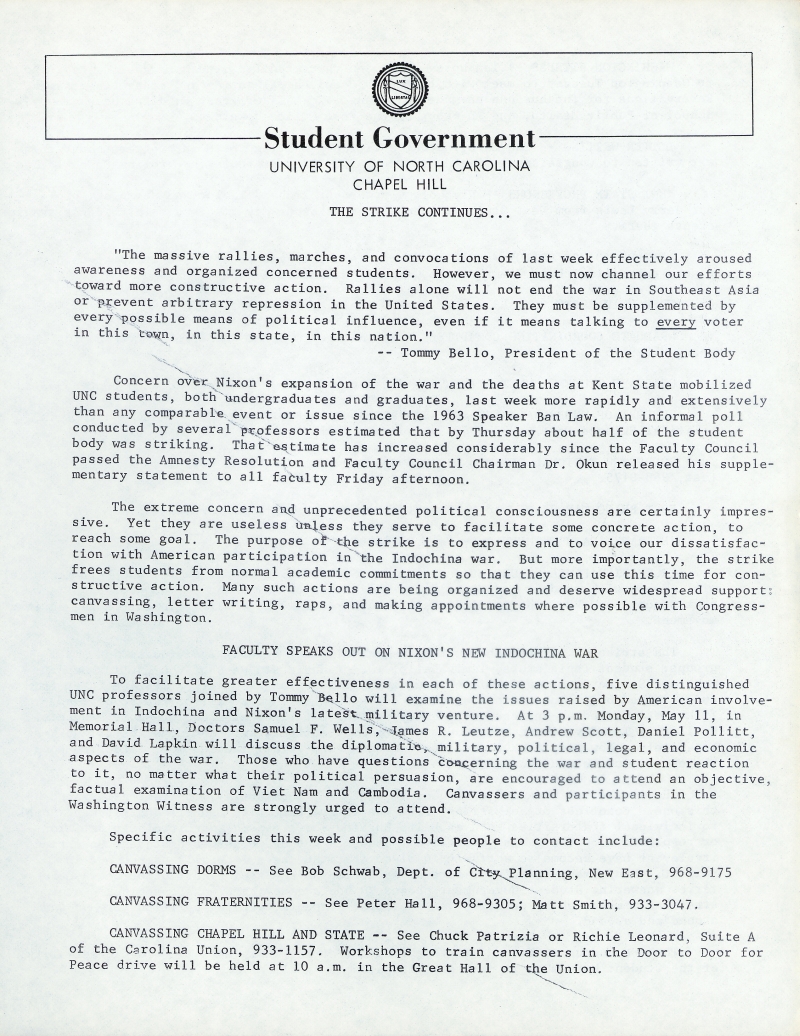 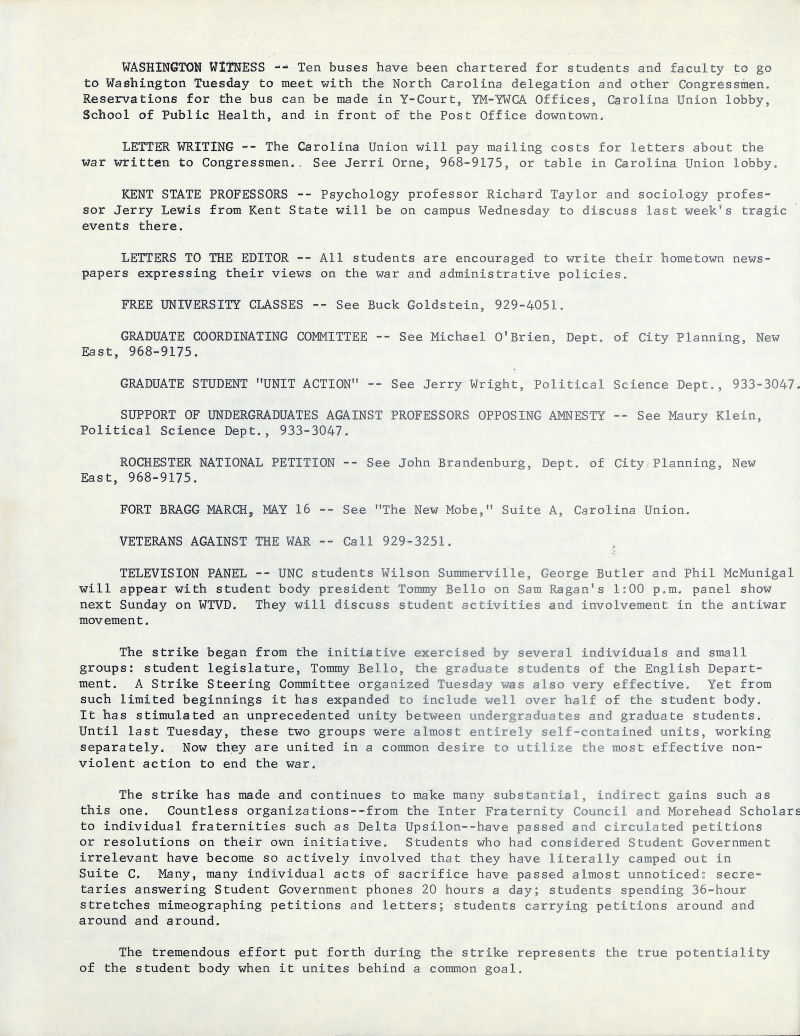 The massive rallies, marches, and convocations of the last week effectively aroused awareness and organized concerned students. However, we must now channel our efforts toward more constructive action. Rallies alone will not end the war in Southeast Asia or prevent arbitrary repression in the United States. They must be supplemented by every possible means of political influence even if it means talking to every voter in this town, in this state, in this nation.

Concerns over Nixon's expansion of the war and the deaths at Kent State mobilized UNC students, both undergraduates and graduates, last week more rapidly and extensively than any comparable event or issue since the 1963 Speaker Ban Law. An informal poll conducted by several professors estimated that by Thursday about half of the student body was striking. That estimate has increased considerably since the Faculty Council passed the Amnesty Resolution and Faculty Council Chairman Dr. Okun released his supplementary statement to all faculty Friday afternoon.

The extreme concern and unprecedented political consciousness are certainly impressive. Yet they are useless unless they serve to facilitate some concrete action, to reach some goal. The purpose of the strike is to express and to voice our dissatisfaction with American participation in the Indochina war. But more importantly, the strike frees students from normal academic commitments so that they can use this time for constructive action. Many such actions are being organized and deserve widespread support: canvassing, letter writing, raps, and making appointments where possible with Congressmen in Washington.

To facilitate greater effectiveness in each of these actions, five distinguished UNC professors joined by Tommy Bello will examine the issues raised by American involvement in Indochina and Nixon's latest military venture. At 3 p.m. Monday, May 11, in Memorial Hall, Doctors Samuel F. Wells, James R. Leutze, Andrew Scott, Daniel Pollitt, and David Lapkin will discuss the diplomatic, military, political, legal, and economic aspects of the war. Those who have questions concerning the war and student reaction to it, no matter what their political persuasion, are encouraged to attend an objective, factual examination of Viet Nam and Cambodia. Canvassers and participants in the Washington Witness are strongly urged to attend.

Specific activities this week and possible people to contact include:

The strike began from the initiative exercised by several individuals and small groups: student legislature, Tommy Bello, the graduate students from the English Department. A Strike Steering Committee organized Tuesday was also very effective. Yet from such limited beginnings it has expanded to include well over half of the student body. It has stimulated an unprecedented unity between undergraduate and graduate students. Until last Tuesday, these two groups were almost entirely self-contained units, working separately. Now they are united in a common desire to utilize the most effective non-violent action to end the war.

The strike has made, and continues to make many substantial, indirect gains such as this one. Countless organizations - from the Inter Fraternity Council and Morehead Scholars to individual fraternities such as Delta Upsilon - have passed and circulated petitions or resolutions on their own initiative. Students who had considered Student Government irrelevant have become so actively involved that they literally camped out in Suite C. Many, many individual acts of sacrifice have passed almost unnoticed: secretaries answering Student Government phones 20 hours a day; students spending 36-hour stretches mimeographing petitions and letters; students carrying petitions around and around and around.

The tremendous effort put forth during the strike represents the true potentiality of the student body when it unites behind a common goal.