Nixon, Vietnam, and The Cold War/ Nixon's Accomplishments and Defeats

From: An Outline of US History

By, The US Department of State

Nixon and the Cold War 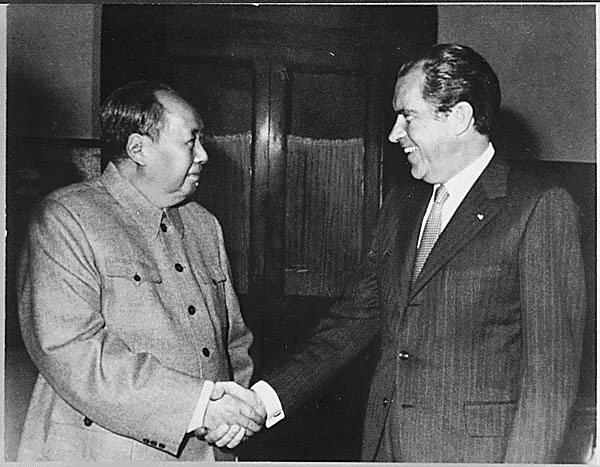 As Vietnam wound down, the Nixon administration took historic steps toward closer ties with the major Communist powers. The most dramatic move was a new relationship with the People's Republic of China. In the two decades since Mao Zedong's victory, the United States had argued that the Nationalist government on Taiwan represented all of China. In 1971 and 1972, Nixon softened the American stance, eased trading restrictions, and became the first U.S. president ever to visit Beijing. The "Shanghai Communique" signed during that visit established a new U.S. policy: that there was one China, that Taiwan was a part of China, and that a peaceful settlement of the dispute of the question by the Chinese themselves was a U.S. interest.

With the Soviet Union, Nixon was equally successful in pursuing the policy he and his Secretary of State Henry Kissinger called détente. He held several cordial meetings with Soviet leader Leonid Brezhnev in which they agreed to limit stockpiles of missiles, cooperate in space, and ease trading restrictions. The Strategic Arms Limitation Talks (SALT) culminated in 1972 in an arms control agreement limiting the growth of nuclear arsenals and restricting anti-ballistic missile systems.

Vice president under Eisenhower before his unsuccessful run for the presidency in 1960, Nixon was seen as among the shrewdest of American politicians. Although Nixon subscribed to the Republican value of fiscal responsibility, he accepted a need for government's expanded role and did not oppose the basic contours of the welfare state. He simply wanted to manage its programs better. Not opposed to African-American civil rights on principle, he was wary of large federal civil rights bureaucracies. Nonetheless, his administration vigorously enforced court orders on school desegregation even as it courted Southern white voters.

Deficit spending is paying for programs by borrowing and therefore running a budget deficit.

Perhaps his biggest domestic problem was the economy. He inherited both a slowdown from its Vietnam peak under Johnson, and a continuing inflationary surge that had been a by-product of the war. He dealt with the first by becoming the first Republican president to endorse deficit spending as a way to stimulate the economy; the second by imposing wage and price controls, a policy in which the Right had no long-term faith, in 1971. In the short run, these decisions stabilized the economy and established favorable conditions for Nixon's re-election in 1972. He won an overwhelming victory over peace-minded Democratic Senator George McGovern.

Things began to sour very quickly into the president's second term. Very early on, he faced charges that his re-election committee had managed a break-in at the Watergate building headquarters of the Democratic National Committee and that he had participated in a cover-up. Special prosecutors and congressional committees dogged his presidency thereafter.

Factors beyond Nixon's control undermined his economic policies. In 1973 the war between Israel and Egypt and Syria prompted Saudi Arabia to embargo oil shipments to Israel's ally, the United States. Other member nations of the Organization of the Petroleum Exporting Countries (OPEC) quadrupled their prices. Americans faced both shortages, exacerbated in the view of many by over-regulation of distribution, and rapidly rising prices. Even when the embargo ended the next year, prices remained high and affected all areas of American economic life: In 1974, inflation reached 12 percent, causing disruptions that led to even higher unemployment rates. The unprecedented economic boom America had enjoyed since 1948 was grinding to a halt.

Nixon's rhetoric about the need for "law and order" in the face of rising crime rates, increased drug use, and more permissive views about sex resonated with more Americans than not. But this concern was insufficient to quell concerns about the Watergate break-in and the economy. Seeking to energize and enlarge his own political constituency, Nixon lashed out at demonstrators, attacked the press for distorted coverage, and sought to silence his opponents. Instead, he left an unfavorable impression with many who saw him on television and perceived him as unstable. Adding to Nixon's troubles, Vice President Spiro Agnew, his outspoken point man against the media and liberals, was forced to resign in 1973, pleading "no contest" to a criminal charge of tax evasion.

Nixon probably had not known in advance of the Watergate burglary, but he had tried to cover it up, and had lied to the American people about it. Evidence of his involvement mounted. On July 27, 1974, the House Judiciary Committee voted to recommend his impeachment. Facing certain ouster from office, he resigned on August 9, 1974.

As Vietnam wound down, the Nixon administration took historic steps toward closer ties with the major Communist powers." data-share-imageurl="">