People began arriving as early as seven o’clock in the morning at the parking area at Newfound Gap on the North Carolina-Tennessee border. It was the second of September 1940 and a fine, clear, breezy day at the crest of the Smoky Mountains. By mid-morning there was no space left for parking, and cars were being shunted off onto nearby secondary roads, while their passengers were delivered to the gap in school buses. At five in the afternoon more than 10,000 people had gathered to greet the motorcade from Knoxville bringing President Franklin Delano Roosevelt to the mountain top for the dedication of the Great Smoky Mountains National Park.

President Roosevelt had long been a friend of the park, but pressing national and international concerns influenced his speech. Taking as his theme the spirit of the pioneers who had settled the mountains, he called on Americans to show that same spirit in the face of threats from Europe and Asia and sought to rally support for his plans to strengthen national defense. Newspapers reported that he received an enthusiastic response from the crowd and was strongly supported by Governor Clyde Hoey of North Carolina who spoke briefly, as did Governor Prentice Cooper of Tennessee and Secretary of the Interior Harold Ickes. Roosevelt did not neglect the park altogether, however. He spoke of the many varieties of plant and animal life that would be preserved for the future : “… trees here that stood before our forefathers ever came to this continent…” and “brooks that still run as clear as on the day the first pioneer cupped his hand and drank from them.” The park, he believed, would show Americans their past because “the old frontier… lives and will live in these untamed mountains to give the future generations a sense of the land from which their forefathers hewed their homes."

North Carolinians had been involved in agitating for some sort of national park in the southern Appalachian Mountains since 1899 when the Asheville Board of Trade had been instrumental in organizing the Appalachian National Park Association. For a while interest shifted to the creation of a national forest, and the Weeks Law, passed by Congress in 1911, did authorize creation of forest reserves somewhere in the White Mountains of New Hampshire and the southern Appalachians. A shift of emphasis from national forest back to a national park followed the creation of the U. S. Park Service in 1916 and the National Park Association in 1919. The impact of the automobile and the potential of tourism also increased enthusiasm for a park. In 1924 the U. S. Department of the Interior released a report favorable to forming a park in the Smoky Mountains on the border of North Carolina and Tennessee, and in that same year the General Assembly of North Carolina appointed a special commission to promote North Carolina’s effort to secure the park. The commission faced a difficult challenge because the U. S. government would only create the park if the states could provide the land. National parks in the west had been carved out of federal land, but all the land for a park in the Smoky Mountains would have to be bought from private owners. The North Carolina park commission sought to raise money from private gifts and public funds. In 1927 the state of North Carolina provided two million dollars to purchase land, and when this amount plus private gifts would not meet the need, John D. Rockefeller gave another five million dollars from the Laura Spelman Rockefeller Memorial Fund. In 1930 the governors of North Carolina and Tennessee gave deeds to nearly 159,000 acres in the Smoky Mountains to the United States, and the land was given limited park status. During the 1930s several more purchases rounded out the park, and it received full park designation in 1940.

In the years following its opening the Great Smoky Mountains National Park has proved to be one of the most popular parks in the country. The park is 95 percent forested of which 25 percent is old growth, comprising more than 100 species of trees. It is home to 50 species of fish, 39 species of reptiles, 43 species of amphibians, and 66 species of mammals, including its famous black bears. More than 1500 species of flowering plants grow in the park, which was named an International Biosphere Reserve in 1976. It is known for its miles of hiking trails and fishing streams. In Cades Code visitors find historic nineteenth and twentieth century homes, mills and other buildings which illustrate life in the remote areas of the Appalachian mountains. 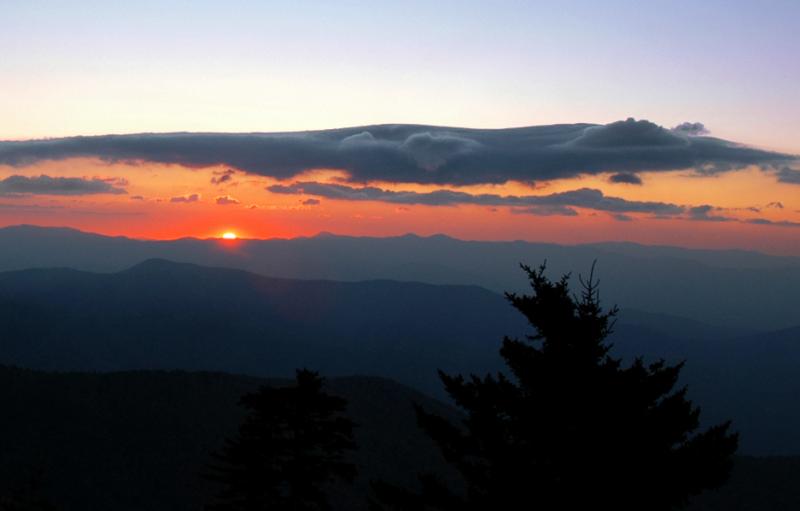 Sunrise over the Great Smoky Mountains National Park as seen from the top of Clingmans Dome.