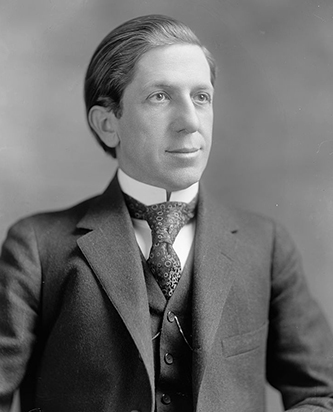 Clyde Roark Hoey, printer, newspaper publisher, state legislator, attorney general, governor, congressman, and U.S. senator, was born in Shelby, the fifth child of Mary Charlotte and Samuel Alberta Hoey, a Confederate captain. At age twelve, when his father's health failed, he left school to earn a living. From the time of his first job as a printer's devil at the Shelby Aurora, beginning 1 Oct. 1890, Hoey expressed a maturity beyond his years. After a brief period in Shelby, he became a printer at the Charlotte Observer. While in Charlotte he heard that the Shelby Review was in financial straits. He hurried home and purchased the newspaper on 1 Aug. 1894 with promises to pay off the creditors; at sixteen he became publisher of the paper under the name of the Cleveland Star.

When he was only twenty, the Democrats of his native Cleveland County nominated Hoey for the General Assembly. He was elected after a hotly contested campaign and served in 1899; two years later he was reelected. In 1903 he was a state senator from the Thirty-third District, and from 1903 to 1909 he served as chairman of the Cleveland County Democratic Executive Committee.

Meanwhile, Hoey read law in Shelby, then continued his legal studies at The University of North Carolina from June to September 1899. The same year he was admitted to the state bar. A growing law practice forced him to give up his work at the Star, though he retained ownership of the paper until 1908.

In 1913 Hoey was appointed assistant U.S. attorney for the Western District and served until 1919, when Congressman Edwin Yates Webb, also of Shelby, resigned to accept appointment as a federal judge. Hoey won the nomination for his seat in a special primary on 24 November, defeating Republican John Motley Morehead; he served in Congress from 16 Dec. 1919 to 3 Mar. 1921. Declining to seek reelection, he returned to Shelby and resumed the practice of law. Although identified with his brother-in-law, Governor O. Max Gardner, as a part of the Democratic party leadership centered in Shelby, Hoey did not assume a major role in the primary campaigns of the time, but took to the stump for the party ticket as a "silver-tongued" orator.

On 15 May 1935, as the state was emerging from the depths of the depression, Hoey—as expected—announced for governor. Raised in the primary campaign was the sales tax imposed by the General Assembly of 1933 which angered the people and caused turmoil within the Democratic party. Dr. Ralph W. McDonald, a young Salem College professor and legislator from Forsyth County, entered the race and made the sales tax a major issue in the contest with Hoey and former speaker A. H. Graham of Orange County, the leading Democratic candidates. In the first primary, Hoey led McDonald by 4,468 votes; in the second primary, many of the Graham voters switched to Hoey, who was nominated by a margin of nearly 52,000 votes. After an easy victory in the fall, Hoey was inaugurated governor on 7 Jan. 1937 for a four-year term that ended on 9 Jan. 1941. 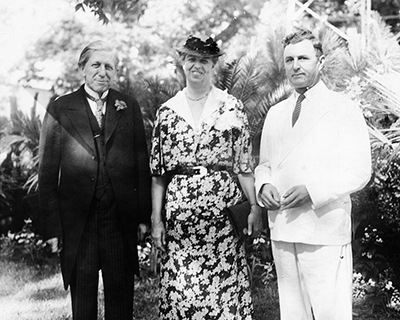 During the Hoey administration the state began furnishing free textbooks for elementary school children, a pay increase for teachers was approved, the highway system was expanded, the first advertising and publicity program for tourism and industry was established, graduate courses were offered in African-American colleges, a modern parole system was developed, child labor laws were passed by the General Assembly, and the State Bureau of Investigation was established. Although Hoey was a "dry," he accepted the legislature's verdict against a statewide referendum on the liquor question and the Alcoholic Beverage Board of Control was created. Early in 1937, when the nation was faced with widespread sit-down strikes, he warned in a radio broadcast on 27 March that "sit-down strikes are unlawful, and will not be tolerated in North Carolina."

A popular governor, Hoey made a total of 976 speeches, visited all parts of the state, and twice daily walked down Raleigh's Fayetteville Street for a Coca Cola break at a drugstore. He did not seek to build a political machine and refused to become involved in the selection of his successor. When his gubernatorial term ended he continued to serve his party as Democratic national committeeman from 1941 to 1944.

Entering the race for the U.S. Senate in 1944, Hoey defeated former governor and former senator Cameron Morrison in the primary and easily won in the general election. He took his seat in the Senate on 3 Jan. 1945. His long white hair, frock coat, striped pants, wing collar, floral tie with a diamond stickpin, high-top shoes, and cordial and courtly manner soon set him apart as a senator who possessed the essence of that office. Some of his colleagues called him "The Duke." He was unopposed in the 1950 primary and was overwhelmingly reelected in the general election.

Senator Hoey was an effective member of the Finance and Agriculture committees. He received acclaim for his work as chairman of the Permanent Investigating Subcommittee, leading the investigations of the "five percenter" scandals with a calm hand and refusing to succumb to the appeal of publicity. His unshakable poise, rapierlike wit, repartee with a subtle sting, and polished diplomacy became Hoey hallmarks in Congress. 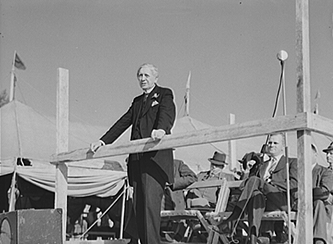 A Methodist layman, he taught Sunday school at Central Methodist Church in Shelby and, while governor, instructed the Men's Class at Edenton Street Methodist Church in Raleigh. He was a Mason and a member of the Odd Fellows, Woodmen of the World, Knights of Pythias, Junior Order, and Omicron Delta Kappa and Sigma Chi fraternities. He was given honorary LL.D. degrees by Davidson College (1937), The University of North Carolina (1938), and Duke University (1938).

Hoey married Bessie Gardner of Shelby on 22 Mar. 1900; she died on 13 Feb. 1942. They had three children: Clyde R., Jr., Charles A., and Isabel Y. (m. Dan M. Paul). On 12 May 1954, Hoey went to his office and did a radio broadcast tape recording but he appeared to be tired and weak. Afterwards he attended a Senate Finance Committee meeting, had lunch, and returned to his office for his usual brief rest. His administrative assistant, Jack Spain, became concerned when he did not resume his normal schedule. Investigating, he found Hoey slumped in a chair at his desk, dead from a stroke at age seventy-six. Many of his colleagues and other prominent governmental officials attended the funeral in Shelby. He was buried in the town's Sunset Cemetery.

Senator Hoey, the last of the "Shelby Dynasty," was proud of his record of political leadership that spanned most of his life.

Memorial Services in the Senate and House of Representatives, Clyde Roark Hoey, A Late Senator from North Carolina (1954).