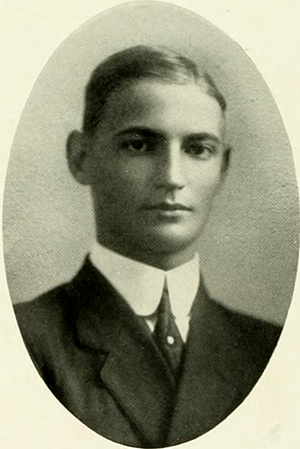 Alexander Hawkins ("Sandy") Graham, lawmaker, lieutenant governor, and highway administrator, was born in Hillsborough, the only child of the Confederate Army veteran Major John Washington Graham's second marriage to Maggie Forrester Bailey. A descendent of a long line of prominent public officials, Graham grew up in Hillsborough as the youngest member of a family of four boys and two girls. His father had been a state senator five times and chairman of the state tax commission; his grandfather, Governor William Alexander Graham, had served as a U.S. senator, secretary of the navy, and governor; and his great-grandfather, General Joseph Graham, fought in the Revolutionary War.

Nicknamed after an uncle, Sandy Graham attended Orange County schools, Episcopal High School in Alexandria, Va., and The University of North Carolina. While at the university, he was editor of the Yackety Yack yearbook, cheerleader, commencement marshal, and member of the Dialectic Society, Gorgon's Head, and Zeta Psi fraternity. He was graduated with an A.B. degree in 1912. To continue his education, Graham studied law at the university during the summer session of 1912–13 and the following year entered Harvard, where he roomed with Colonel William Joyner of Raleigh.

After finishing his education, Graham returned to Hillsborough to join his father in law practice. Within a year, he had become the attorney for Orange County and the town of Hillsborough. His practice was interrupted, however, when he joined the army as a volunteer on 13 May 1917. He attended officer's training camp at Fort Oglethorpe, Ga., was commissioned as a second lieutenant, and served overseas with the 81st ("Wildcat") Division. After arriving in France in August 1918, Graham won two promotions in three months—from second lieutenant to captain. He also was a regimental adjutant for the 324th Infantry. When discharged on 15 July 1919, he had served a total of twenty-seven months with the army.

Graham's political career began upon his return to Hillsborough. In 1919, he was named chairman of the Orange County Democratic party, a post he held until 1947. In 1921, he won a seat in the state house of representatives. As a freshman legislator, Graham began his fight for better highway systems by urging the passage of a $50 million road bond issue. He served five consecutive terms in the state house, culminating in the position of speaker in 1929. During his years in the General Assembly, Graham fought for highway maintenance and education. In 1927, he became chairman of the house finance committee. While holding this office, he was also an ex officio member of the advisory budget committee. In August 1931 Governor O. Max Gardner appointed Graham to act as speaker of the executive council in the absence of O. M. Mull.

The highest political office Graham held was the lieutenant governorship in 1933–37. During his term, he tried to keep schools open and to extend the school year to nine months. He also presided at the economic war council of the state's leading bankers in the senate chambers.

After an unsuccessful gubernatorial campaign in which Graham finished third in the first primary behind Clyde R. Hoey of Shelby and Dr. Ralph McDonald, he returned to Hillsborough to practice law. In 1944 he campaigned for Gastonia's R. Gregg Cherry for the governorship, and in 1945 the new governor appointed Graham to head the State Highway and Public Works Commission. Graham organized the state's reconstruction and repair program after the war, when over 5,000 miles of road were paved during his administration. At the completion of his term in 1949, Graham again was active as a Hillsborough lawyer in the firm of Graham and Levine.

In 1953, Governor William B. Umstead of Durham asked Graham to return to his post as highway commissioner. Graham agreed to lead the new fourteen-division, fourteen-commissioner organization. As a highway administrator, he instigated two major studies of highway operations, the Parsons Report and the Haskins-Sells study, and he crusaded for a limited access highway policy in North Carolina. When Graham left the post in 1957, the state was rated the leading state in terms of progress made on the interstate highway system. His retirement in 1957 marked the end of a career of public service that had spanned over thirty-five years.

As an Episcopalian, Graham served on the vestry and as senior warden of St. Matthew's Episcopal Church. He was a member of the North Carolina Bar Association and active in the Hillsborough Post of the American Legion. The Hillsborough Exchange Club noted his extensive career in public service with a certificate of entry in the "Book of Golden Deeds." Graham supported The University of North Carolina throughout his career, serving as a trustee for many years. He was a member of the Rocky Mount Mills board of directors for fifty years; at the time of his death, he was chairman.