The historic poet laureate of Chatham County, North Carolina, George Moses Horton, was the only person to publish a book while living in slavery. George was born into slavery about 1797 on William Horton’s tobacco plantation in Northampton County in North Carolina. His enslaver moved to Chatham County in the Piedmont region of North Carolina, where he grew up as a cow-hand. Young George Moses Horton taught himself to read by using an old speller, the scriptures, and a copy of a Methodist hymnal. He composed poems in his head, but he was unable to write them down. Therefore, he recited his poems while others transcribed them.

In 1815, when George was 17, he became the property of William’s son, James Horton. He plowed the farm with a horse-drawn plow and was often sent to Chapel Hill by his enslaver to sell produce. In Chapel Hill, his opportunities expanded by meeting students from the University of North Carolina. Recognizing his sophisticated vocabulary, the students at the University of North Carolina at Chapel Hill encouraged Horton to recite his own verses. The literary reputation of George Moses Horton spread, and he began to sell poems for students to send to their sweethearts. Writing acrostic poems based on the names of the young men’s sweethearts, Horton would compose many of the poems while plowing the fields. He would retain the poetry in his head until he could dictate the poems to one of the gentlemen for which he wrote. He received 25 cents for each of his poems. However, some gentlemen bestowed upon Horton 50 to 75 cents a poem in addition to giving him respectable suits of clothes and books. Horton’s goal was to use the money he earned to buy his freedom.

Through his literary accomplishments, he earned the admiration and support of notable people such as Governor John Owen, Joseph Caldwell and David L. Swain, presidents of the university, and newspapermen, William Lloyd Garrison, and Horace Greeley. Caroline Lee Hentz, a professor’s wife and novelist, befriended Horton and helped him publish some of his poems in local newspapers. The Hope of Liberty, a book of twenty-one poems, was published in 1829. The book did not sell enough copies to purchase his freedom. Using his income from selling his poems and from doing handyman work for the university, Horton paid his enslaver in lieu of service. In 1845, George published Poetical Works. However, the books failed to raise sufficient funds for Horton to buy his freedom.

He spent the Civil War on the farm of his enslaver. In April 1865, George Moses Horton walked to Raleigh to be with the liberating Union army who took him under their protection. Naked Genius, Horton’s last volume of poetry, published in 1865, was written in the three months that he was with the northern army. In his sixties, when Naked Genius was published, Horton had written ninety poems for the book. After gaining his freedom, Horton spent his final years in Philadelphia writing Sunday school stories and working for North Carolina friends who had moved to the North. He did not attain the popularity in Philadelphia that he had in Chapel Hill, and the details of his death are unknown. 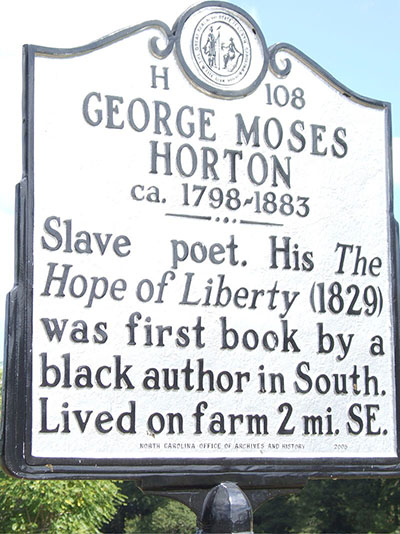