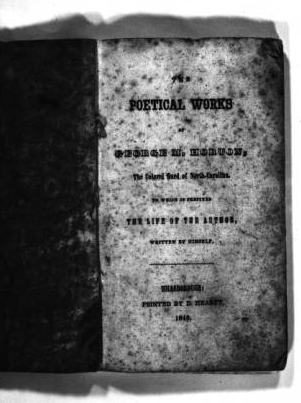 By the time he was twenty, George Moses Horton had begun visiting the campus of The University of North Carolina eight miles away. There he sold students acrostics on the names of their sweethearts at twenty-five, fifty, and seventy-five cents. For several decades he "bought his time" from his enslavers through the sale of his poems and through wages collected as a campus laborer. Caroline Lee Hentz, novelist and professor's wife, encouraged him; his first printed poem, "Liberty and Slavery," appeared in Mrs. Hentz's hometown Massachusetts newspaper, the Lancaster Gazette, on April 8, 1829. Soon plans were made to purchase his freedom and transport him to Liberia. To raise funds, Horton's The Hope of Liberty, the first book published in the South by a Black man, came later that year from the press of Raleigh's journalist Joseph Gales, but profits were inconsiderable and the plans were dropped. From time to time, Horton won the admiration and support of such men as Governor John Owen, presidents Joseph Caldwell and David L. Swain of The University of North Carolina, and newspapermen William Lloyd Garrison and Horace Greeley.

In 1845 Dennis Heartt of the Hillsborough Recorder brought out The Poetical Works of George M. Horton, The Colored Bard of North-Carolina, To Which Is Prefixed The Life of the Author, Written by Himself. Seldom was Horton without a manuscript for which he was gathering subscriptions from admiring students and friends. In April 1865 he attached himself to Captain Will H. S. Banks, and thereafter followed Banks's Michigan cavalry unit to Lexington and Concord. 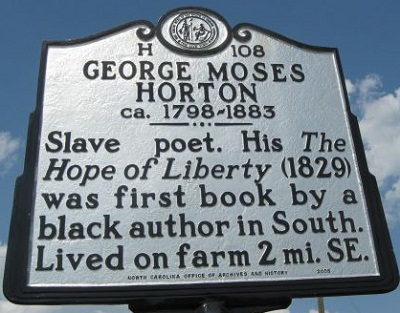 Horton's last years were spent in Philadelphia writing Sunday school stories and working for old North Carolina friends who lived in the city. Details of his death are unrecorded. Sometime in the 1830s, Horton married Martha Snipes, a woman enslaved by Franklin Snipes. George and Martha had two children: a son named Free and a daughter named Rhody, both of whom bore their mother's name.

Horton's poems are traditional in vocabulary and style. Horton's poems for pay -- mostly those written for students at UNC -- are very different than his poems discussing rural life and slavery. His poetic protests of his status are the first ever written by a slave in America.

Slavery and the Making of the University. University of North Carolina at Chapel Hill. http://www.lib.unc.edu/mss/exhibits/slavery/horton.html