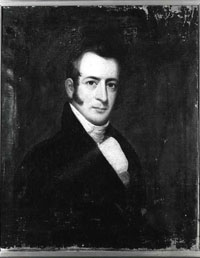 John Owen (1787-1841) presided over advances in internal improvements and education while governor and, post-term, turned down an offer to be the Whig vice-presidential candidate. Born in Bladen County in August 1787, he was the son of Eleanor Porterfield and Colonel Thomas Owen, Revolutionary patriot, legislator, and prosperous landowner. Little is known of Owen’s youth or early education, but in 1804 he was a student at the University of North Carolina. Though he did not graduate from the University, he would serve for more than twenty years as a trustee. Owen married Lucy Brown of Bladen County, daughter of General Thomas Brown. Their marriage produced daughter, Lucy.

Owen represented Bladen County in the House of Commons from 1812 to 1814 and in the Senate in 1819, 1820, and 1827-1828. From 1824 to 1827 he also served on the Council of State under Governors Hutchins G. Burton and James Iredell, Jr. On December 8, 1828, Owen was elected governor after several ballots, narrowly defeating Richard Dobbs Spaight Jr. He was elected again in 1829, but declined to seek a third term during the following year for personal reasons.

Owen’s two terms as governor brought significant initiatives in county government, internal improvements, and education. Sheriffs and clerks of court in the various counties were made subject to election by all qualified voters rather than by justices of the peace alone. In the area of internal improvements, Owen’s progressive leadership led to sizable appropriations for improvements on the Roanoke River at Weldon and for the recurring scheme to create a navigable inlet through the Outer Banks near Roanoke Island.

Owen’s positions on education were especially progressive, particularly with regard to primary schools. In addressing the General Assembly, he stressed the constitutional obligations of government and the moral utility of public education in reducing not only ignorance, but poverty and crime as well. While other states had forged ahead, North Carolina, in his view, had been guilty of “a manifest dereliction of duty” in failing to instruct its young people. Moreover, Owen believed that sufficient funds for educating the poor should be obtained through taxing the rich.

It was during Owen’s governorship that related regional and racial tensions reached crisis proportions. In 1830, only one year prior to the Nat Turner rebellion, Owen warned the General Assembly and the public at large of abolitionist attempts to “sow sedition” among the state’s slave population. In light of the growing public concern, the General Assembly that same year strengthened the existing patrol system to further restrict the movement and free association of bondsmen.

Owen returned to Bladen County following his second term as governor, but did not retire from public life. He was a leading member of the Constitutional Convention of 1835, where he opposed the disfranchisement of free blacks and a continuance of the religious test for officeholders. In the fall of 1839 he presided over the first Whig Party convention in the state and also over the Whigs’ national convention in Harrisburg, Pennsylvania. Indeed, during the national convention, he declined to run as vice-president on the ticket headed by William Henry Harrison. Had he accepted the nomination, and the election results remained the same, he would have become president following Harrison’s early death in April 1841. Owen died while in Pittsboro on October 9, 1841, and was buried there at St. Bartholomew’s Episcopal Church.

Update from the Government & Heritage Library:

According to an obituary printed in the Hillsborough Recorder on August 14, 1835, Governor and Mrs. Owen also had a son, Charles P. Owen.  The paper noted Charles as the Owens' only son.  He died on the evening of August 13, 1835 in Hillsborough at age 14.  He was a student at Hillsborough Academy. (Click here for PDF image of the obituary.)