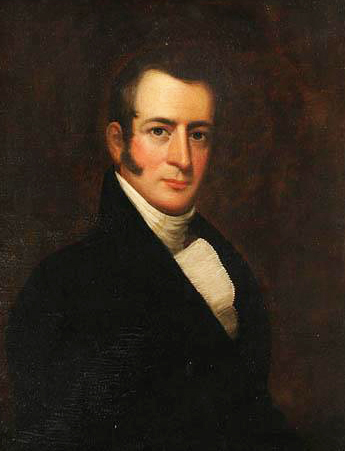 John Owen, farmer, politician, and governor, was born in Bladen County of Welsh ancestry, the son of Eleanor Porterfield and Colonel Thomas Owen, one of the leaders of the Battle of Elizabethtown in August 1781. General James Owen was his brother. His father was born in Chester County, Pa., but moved to Bladen with his family when he was a child. In addition to his service in the American Revolution, for which he received military honors, Thomas Owen was a member of the Provincial Congress at Hillsborough, was elected justice of the Bladen County Court of Pleas and Quarter Sessions, and served many terms as state senator both before and after the war. He died in 1803.

John Owen was a student at The University of North Carolina in 1804 and later served as a trustee of the university for over twenty years. As a young man he married Lucy Brown, the daughter of General Thomas Brown, and they lived at Owen Hill, a plantation up the Cape Fear River from Elizabethtown, where he spent most of his life. They became the parents of a daughter, Lucy, who married Haywood W. Guion, a lawyer.

Before his election as governor, Owen served Bladen County in a number of capacities. In addition to presiding as judge of the inferior courts, he won a seat in the North Carolina House of Commons in 1812 and 1813. He was also state senator in 1819 and 1827. Owen was elected governor by a joint ballot of the General Assembly in 1828 and 1829. For personal reasons he chose not to accept the office a third time. His term ended on 18 Dec. 1832, when he was succeeded by Montfort Stokes. Later Willie P. Mangum defeated him by one vote in his bid for the U.S. Senate.

Owen's two years as governor were marked by his special interest in education and transportation. He submitted a plan for a public school system based on improvements begun in New York and the New England states. He also urged that the rivers of North Carolina be cleared for better transportation, and in 1829 he obtained an appropriation for the construction of a canal and locks at Weldon and the opening of a channel from Albemarle Sound to the ocean. During his administration the election of sheriffs and clerks of county courts was given to the voters instead of the justices.

John Owen's retirement from the governorship did not end his public service to Bladen County and the state. As a delegate to the constitutional convention of 1835, he opposed disfranchising free Negroes and supported a proposal to abolish religious tests as a qualification for officeholders. He also served as president of the Whig National Convention in Harrisburg, Pa., in 1839. During the convention he was offered the nomination of vice-president with William Henry Harrison running as president. Had he chosen to run, he would have become president on the early death of Harrison. However, he declined the nomination on the grounds that it was not proper for him to accept such an offer from a body over which he was the presiding officer. He died in Pittsboro, where he was buried.

John and Lucy Owen also had a son, Charles P. Owen. The Hillsborough Recorder noted Charles as the Owens' only son. He died on the evening of August 13, 1835 in Hillsborough at age 14. He was a student at Hillsborough Academy.